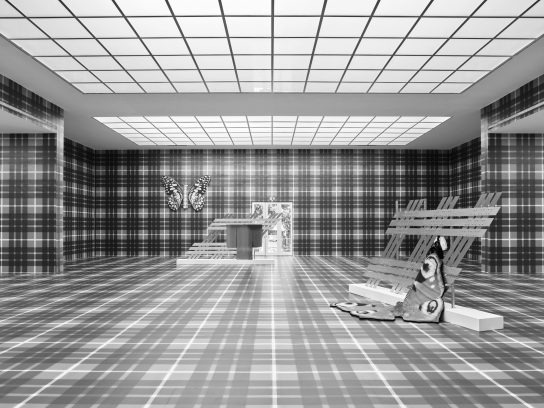 The British artist Anthea Hamilton’s interdisciplinary interest in performance is evident in her three-dimensional arrangements, theatrical ensembles whose tableau-like quality makes them reminiscent of stage sceneries or film sets. Her sculptures, idiosyncratic constructions precariously balanced between emergence and collapse, function like props for stories that remain to be told.

The work of the artist, who was nominated for the Turner Prize in 2016, grows out of wide-ranging research, whether she explores strands in cultural history such as the roots of 1970s disco, art-historical references like Art Nouveau, Italian furniture design or ancient Japanese theatre, documentary photography or lichen. Each subject is studied closely and used as a lens through which to understand the world.

Asked about her sources of inspiration, Hamilton has frequently mentioned the French writer Antonin Artaud and his idea of a “physical knowledge of images.” It is this bodily response to an idea or an image that she wants us to experience when we encounter her work and its use of unexpected materials, scale and humour; like the off-kilter proportions of the various elements, they attest to the fine sense of humour that sustains her art. Many of her installations incorporate objects that caught her attention because of their tactile qualities or fascinating oddness. Other works grow out of autobiographical references and allusions to Hamilton’s own body; cut-outs of her legs have come to be regarded as a leitmotif in her oeuvre.