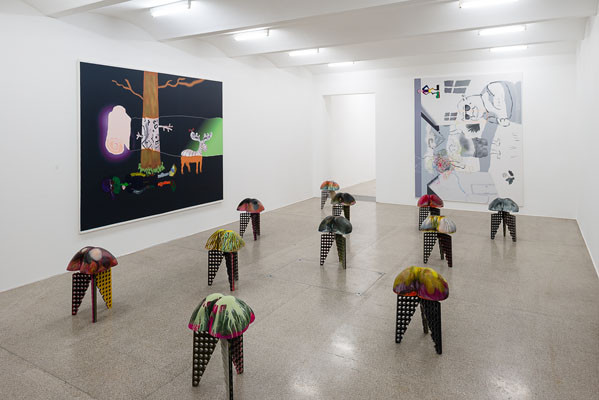 poets and artists express a view of the world as a collage of passing fragments.
there is no bigger picture or a linear logic here, only transitory images and words,
seen as if rushing past the windows of a train.
(Ugo Rondinone)

Ugo Rondinone is not only one of the most successful Swiss artists working today; in recent years, he has also made a name for himself with curatorial projects that he conceives primarily as an extension of his artistic practice.

After the third mind (Palais de Tokyo, Paris, 2007) and the spirit level (Gladstone Gallery, New York, 2011), Artists and Poets is Rondinone’s third exhibition dedicated to a wide-ranging exploration of the relationship between visual art and lyric poetry and the articulation of his conviction that the arts possess a spiritual and transcendental power. Rondinone takes it for granted that “art” and “poetry” naturally go together, emphasizing what both lines of work have in common: he firmly believes that creativity, whether it takes the form of a poem, a sculpture, or a painting, can affect us deeply.

Yet the visitor to Artists and Poets will look (almost) in vain for a “literal” implementation of what the title proposes. With the exception of John Giorno’s Dial-A-Poem, the exhibition features neither works of concrete poetry nor other linguistic or textual pieces. As in his earlier shows, Rondinone postulates that works of art—like poems—can be understood through feeling, intuitively, and require no prepackaged interpretation.

any explanation will reduce the poem and the artwork to the sayable,
and every poem and artwork holds what is essentially unsayable.

His emphasis is on the showing of art, as the generously spaced presentation makes clear: each artist is represented by a sizable ensemble of works, and the placement of the art in pairs encourages dialogue between the oeuvres and a larger conversation throughout the exhibition.
In picking the fifteen artists, Rondinone relied on his intuition and subjective preferences, and the resulting selection defies geographical limitations as well as conventions of periodization. Masterworks of British 1970s Minimal art by Bob Law (1934–2004) meet the monumental concrete sculptures of the young American Justin Matherly. Heimo Zobernig’s early cardboard sculptures from the mid-1980s, meanwhile, are teamed with the painted stamps from fictional countries by the short-lived American artist Donald Evans (1945–1977). Gerwald Rockenschaub—like Zobernig, he is a leading representative of the New Geometry and was instrumental to the renaissance of the Viennese scene in the 1980s—is represented by a series of geometric paintings in small formats in colloquy with Fritz Panzer’s fragile sculptures, in which the line is the dominant element. Colorful works on canvas by Giorgio Griffa, a cofounder of the Pittura Analitica movement in 1960s Italy, appear side by side with assemblages of materials cast in synthetic resin by the German artist Michaela Eichwald. Recent experimental paintings by the New York-based artist Michael Williams, which operate on the intersection between digital and analogue technologies, are in communication with Andra Ursuta’s casts of her own behind, which she painted in luminous colors. The largely forgotten Austrian sculptor Fritz Hartlauer’s (1919–1985) cosmological sculptures vie with Tamuna Sirbiladze’s dynamically expressive large formats. And Andrew Lord’s three-dimensional interpretations of vessels and objects he lifted from Paul Gauguin’s paintings bring Gustav Klimt’s (1862–1918) Beethoven Frieze, on permanent display in the Secession, back into the contemporary conversation.

With Artists and Poets, Rondinone also offers his take on a local context: he studied at the University of Applied Arts in Vienna from 1986 until 1990, and the city still occupies a special place in his heart. Hence also the adaptation of the American performance artist and poet John Giorno’s poetry installation Dial-A-Poem for the exhibition – in collaboration with the Vienna Poetry School, thirty poems by Austrian writers have been recorded for this unusual “telephone service”.
www.secession.at