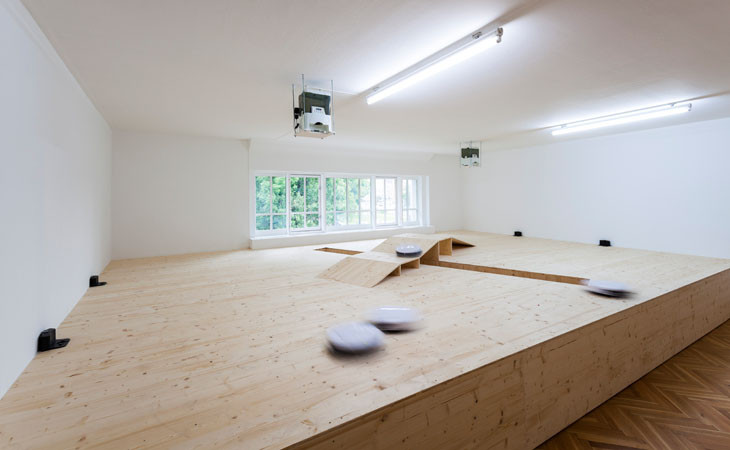 Cao Fei is one of the most outstanding Chinese artists today. Her artistic approach is characterized by a high degree of innovation and her love of experimentation, and her work reflects this in its variety. She produces multimedia installations, videos, and large-format photography. In her most encompassing work to date, RMB City (2008–2011), Cao Fei constructed a complex virtual city full of iconic architect-tures on the Internet platform Second Life as an environment for her avatar China Tracy. The works the artist has conceived for the Secession show a new turn in her oeuvre, integrating sculptural installations and performance elements.

Born in Guangzhou in 1978, Cao Fei belongs to the first generation to grow up in post-communist China. In her work, she explores the condition of this society characterized by rapid transformations of the urban habitat, its fears and lost dreams, its fantasies and strategies to overcome or escape reality, gaming culture being one of these. In so doing, she uses the (stylistic) means of social critique, conventions of documentary film, and the aesthetics of popular culture. Having been raised in a region of booming development, the Pearl River Delta, the artist shows a special interest in new urban centers, whose radical transformation illustrates the contradictions of modern China, and which often serve as a backdrop for her works.

For her exhibition at the Vienna Secession, Cao Fei has produced four complex new pieces, which are on display along with five selected key works. In the outdoor installation Splendid River (2015), four Chinese characters temporarily decorate the Secession’s façade, replicating a replica of the Secession building in Cao Fei’s hometown of Guangzhou, where the building houses the offices of a real estate business. Copying is a common phenomenon in China, where anything from popular brand-name products to icons of Western architecture or even whole towns are faked, as in the case of the Austrian village Hallstatt. Splendid Mirror (2015) similarly addresses the relationship between original and replica. A large number of fake mirrored aviator sunglasses are arranged in a showcase as if for sale. The mirrored glass not only reflects what is regarded as fashionable and ‘cool’; with its one-way visibility, it also alludes to modes of concealing and revealing one’s identity on the Internet.

In her 4-channel video installation Strangers (2015), Cao Fei uses an online dating platform as a space for small, performative interventions for ‘random strangers’ to watch: a random shadow play in front of a city skyline; a Buddha figure smiling into the camera; a person asleep in bed. Users log in from around the world—usually expecting to find sexual attraction, distraction from their everyday routine, or simply driven by curiosity. While individuals seem to become more and more detached from their immediate fellow citizens and surroundings, dating platforms are becoming increasingly popular. Their approach toward human interaction in virtual reality is a strongly consumerist one: the passive voyeur zaps from one stranger to another, like zapping TV channels. Cao Fei’s subtle interventions deliberately do not meet users’ common expectations and the bored gaze of the stranger turns to the next channel, but they nevertheless have the power to surprise, to entertain, and to question.

In her video Cosplayers (2004), the artist examined how the virtual world of gaming culture overlaps with reality. The protagonists are young people who, dressed as their favorite characters from video games, stage (fantasy) plots in the urban surroundings, whereas the isolation and alienation of these young Chinese people becomes clearly palpable in the domestic environment of their parents. Haze and Fog (2013), a recent film project, portrays residents and service workers in a modern apartment building living alienated from one another. The members of the new Chinese society, which has lost its traditions in the course of modernization and whose everyday rituals have changed, symbolically turn into zombies in a dystopian setting. Yet the film’s point of view is not nostalgic; rather, it inquires into the possibilities that may open up when inflexible, fixed models of life are left behind. In the installation Rumba (2015), automated performances take place according to a fixed schedule: household robots perform a kind of random choreography. Triggered by an invisible signal, four cleaning robots start to circle around a stage with barriers and bridges, as if dancing with joy over the conveniences that automation offers the newly rich and middle class.

By invitation of the Board of the Secession
www.secession.at