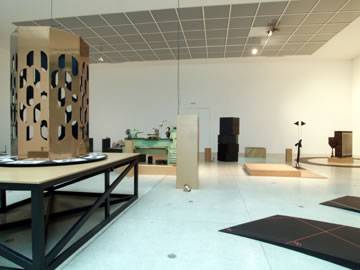 Individual experience and statistical calculation—these are the poles between which a debate took place at the end of the 19th century whose influence extended beyond its philosophical content to the political thought of its time and to the triumph of Modernist art. When Clegg & Guttmann reconstruct this discussion at the Secession using the positions of Ernst Mach and Ludwig Boltzmann, there is a direct link with the institution’s history—not in the sense of a retrospective representation, but as an invitation to expose oneself in the flesh to aspects of the debates conducted by the Vienna Circle: eight stations propose exercises dealing with problems whose scientific, historical and intellectual background is explored in an artist’s book.

The exhibition carries on from earlier works by the artist duo in which the functions and utilizations of historical, public, and institutional spaces intersect. Whether they are recreating structures from the first international Zionist congress, developing a Monument for Historical Change for Berlin, or creating libraries with uncontrolled access, they always actively involve the viewer in appropriating these works as historical and public places.

The same applies at the Secession: the exhibition by Clegg & Guttmann is what Ernst Mach might have referred to as a conceptual construction, consisting of a spatial and temporal composition in eight parts. From the point of view of Ludwig Boltzmann, on the other hand, it might be understood as a sequence of exercises in perception inspired by early Modernism that aim to encourage cognitive and emotional reconciliation with chaos. The installation can be understood as an obstacle course: some of the exercises address themselves to individuals, who are asked, for example, to play drums either to or against the rhythm of a machine; others are designed for groups, as when the “Prisoner’s Dilemma” is staged using one’s own body as a gaming piece.

The Secession itself has links with the debates that form the subject of this exhibition: by tracing out the discussions between Mach and Boltzmann, Clegg & Guttmann are also referring to the Modernist contexts that took shape as a rejection of the society of the Austro-Hungarian monarchy and which also led to the artistic splitting-off to which the Secession owes its existence. In this respect, the exhibition and its venue can be read as a historical drama, as an animated presentation of the emergence of early Modernist philosophy as a highly significant episode in Viennese history. In addition, a special look is taken at the design, architecture, and institutional history of the Secession, presenting a context in which members such as Klimt, Schiele, and Hoffmann developed their artistic idiom. As well as the installation, Clegg & Guttmann will show several videos featuring readings of texts by Mach, Boltzmann, Weininger, Kafka, Musil, Kraus, Loos, and other Viennese cultural personalities of the period.

The consequence of contradictory and nonetheless correct descriptions of reality is a range of modes of perception and corresponding decision-making structures that determine the way actions are taken both in politics and in everyday life. On this subject, Clegg & Guttmann write: “A hundred years or so after the beginning of modernism we find ourselves deeply uncertain about what answers to give the most basic questions of ethics, aesthetics and politics. The existing ideologies seem unsatisfactory, leaving too much unsaid, the cultural agenda, conflicted and inconclusive. Perhaps an act of self-reflection on the origins of the current state of affairs might bring us closer to an insight concerning our identity thus providing us with invaluable tool to investigate where to go next.”