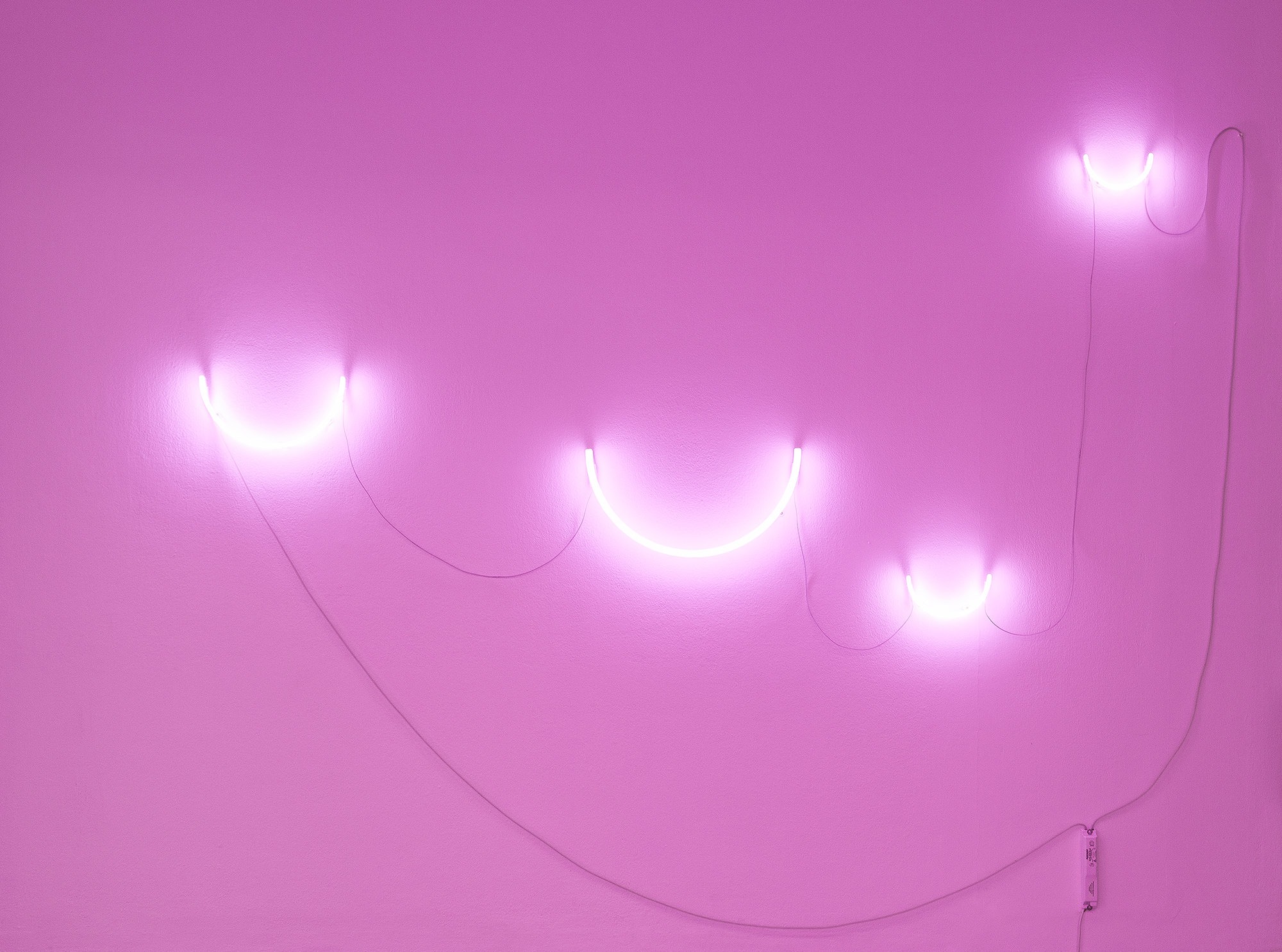 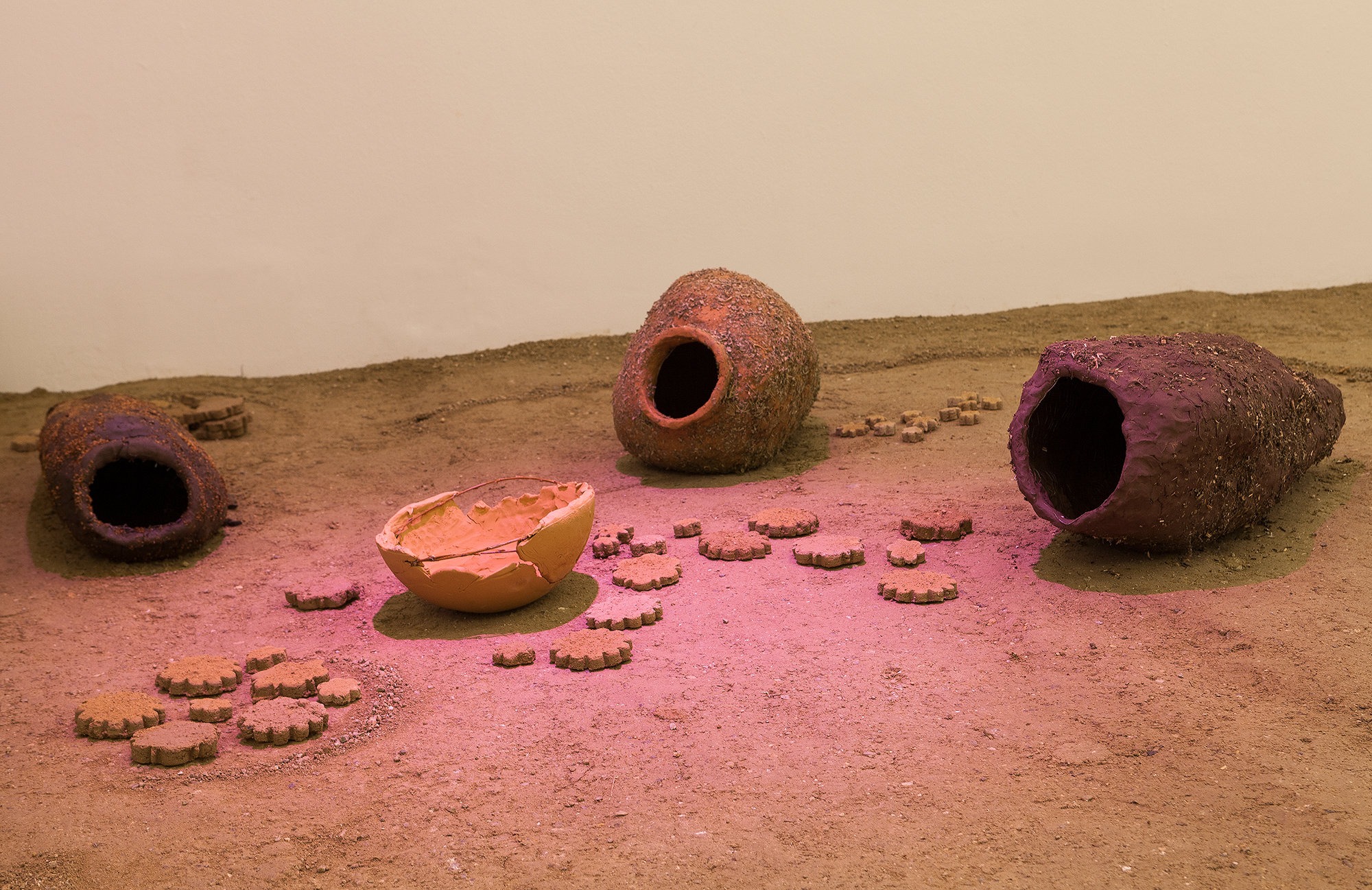 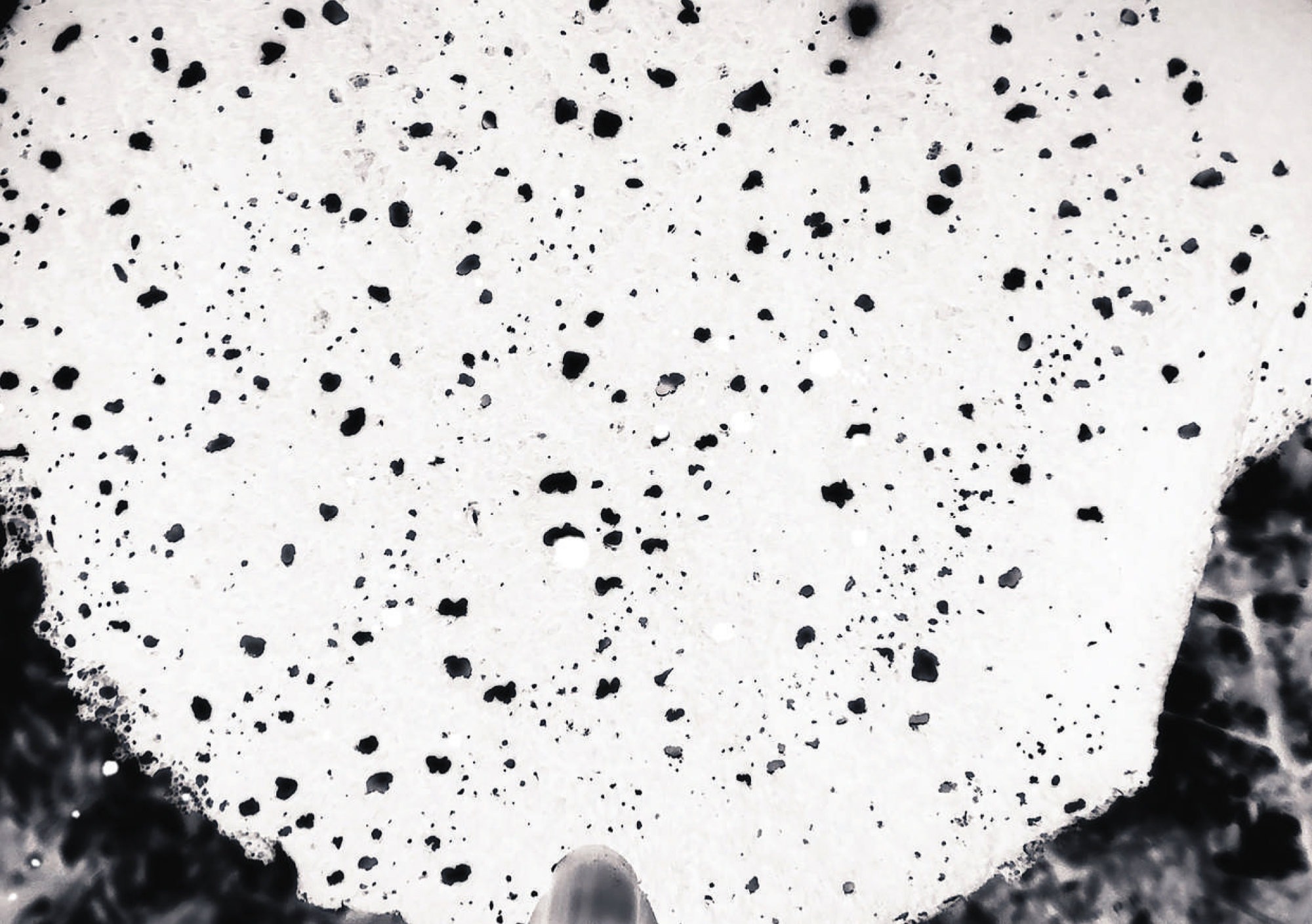 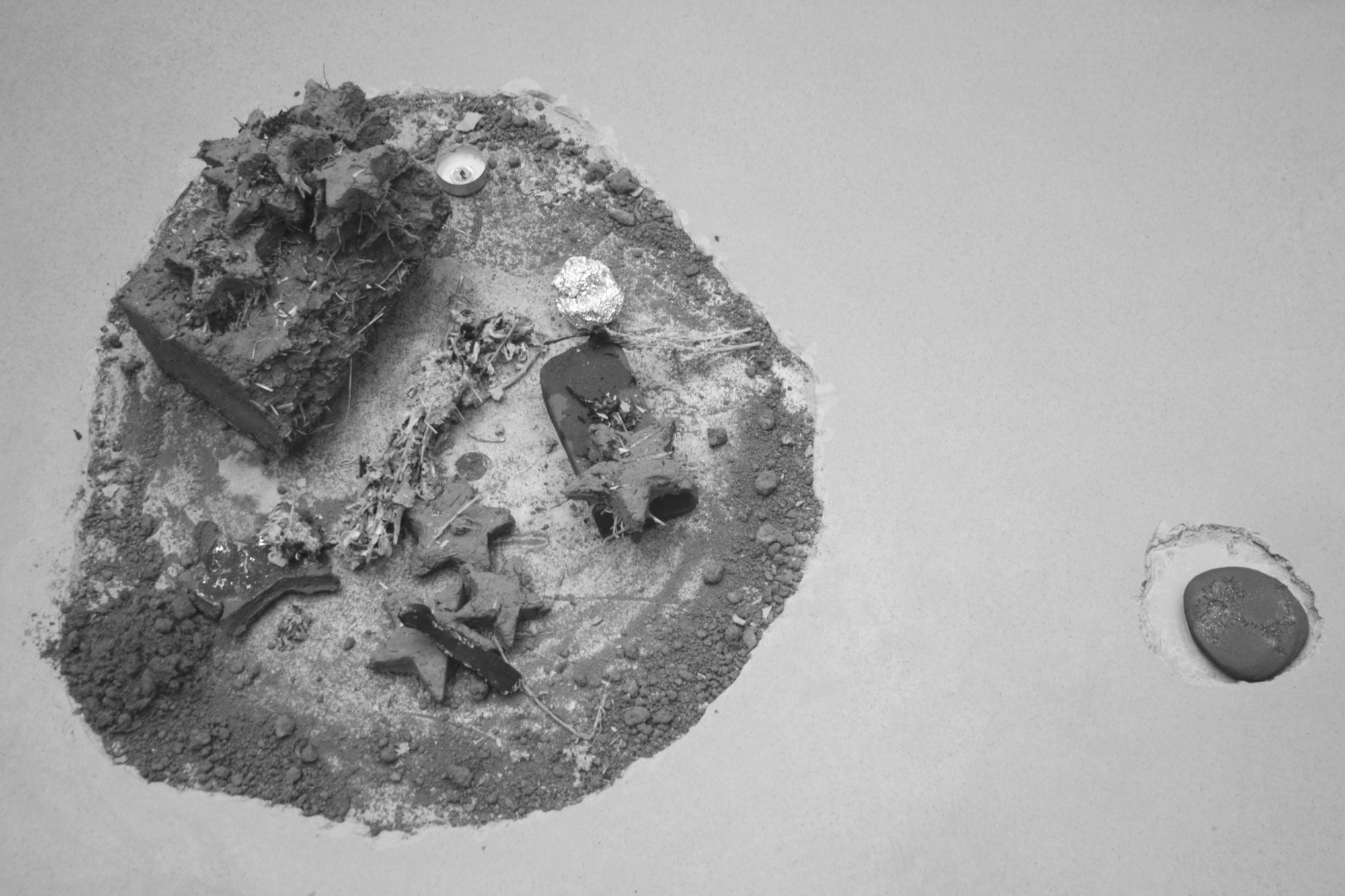 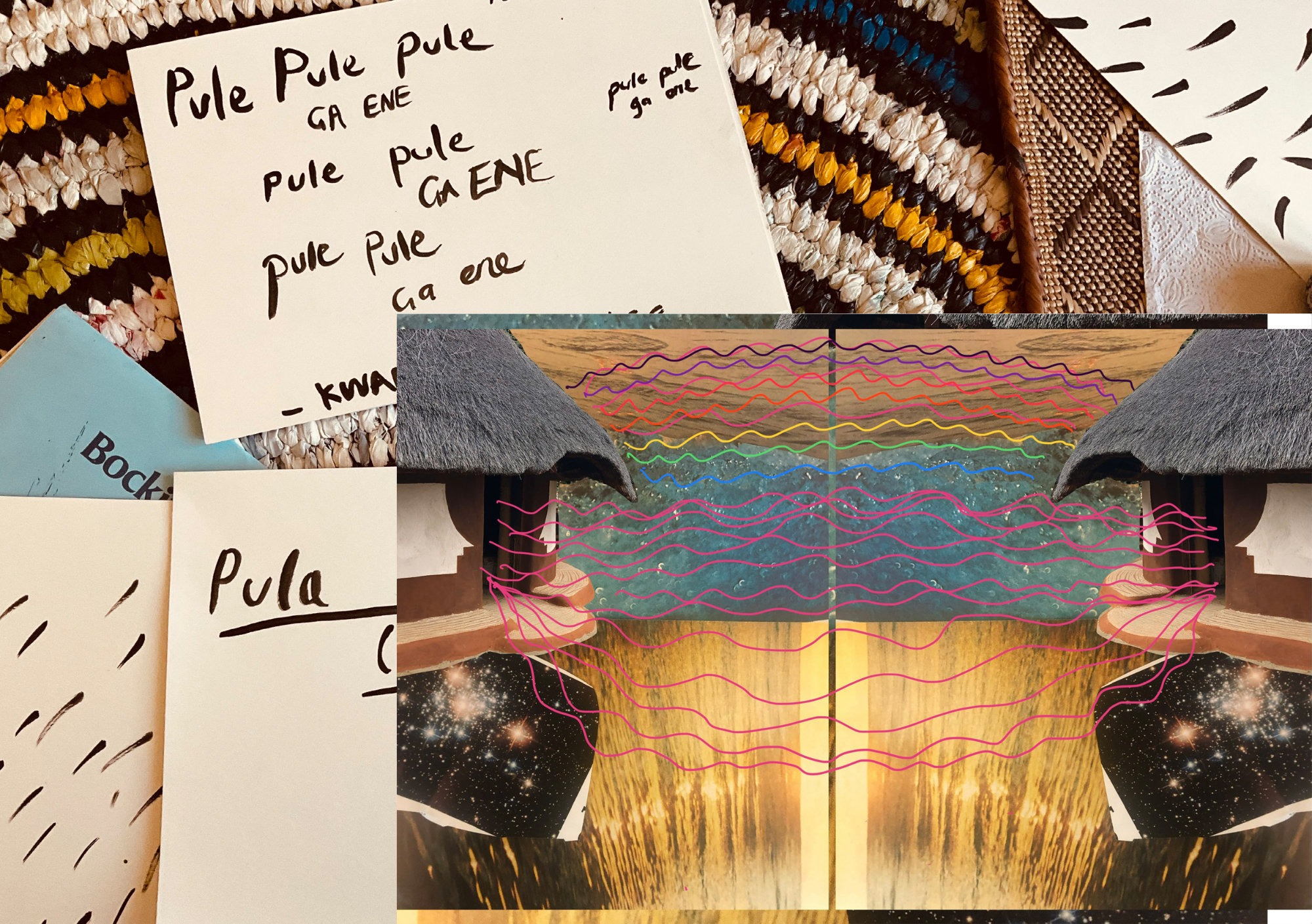 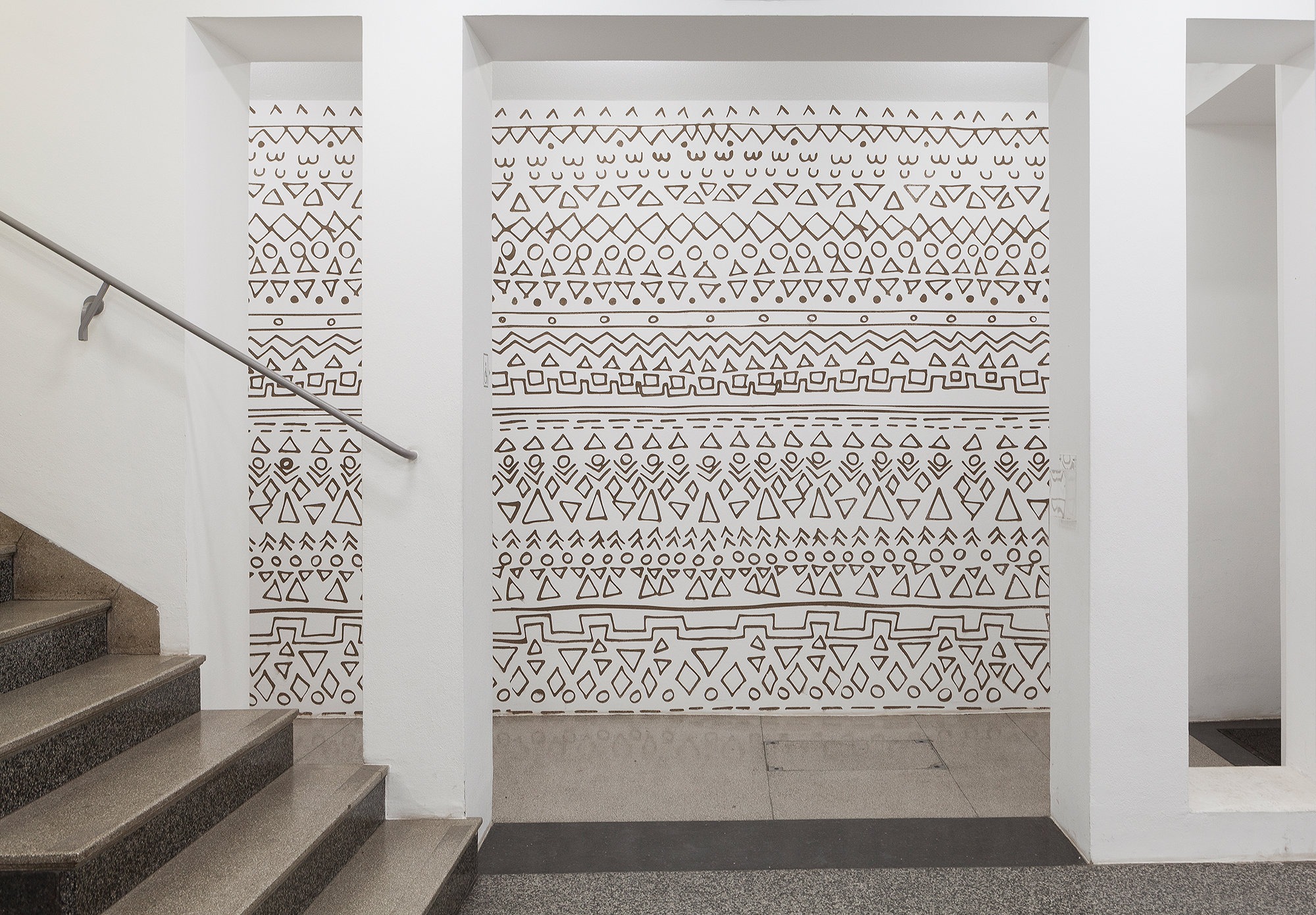 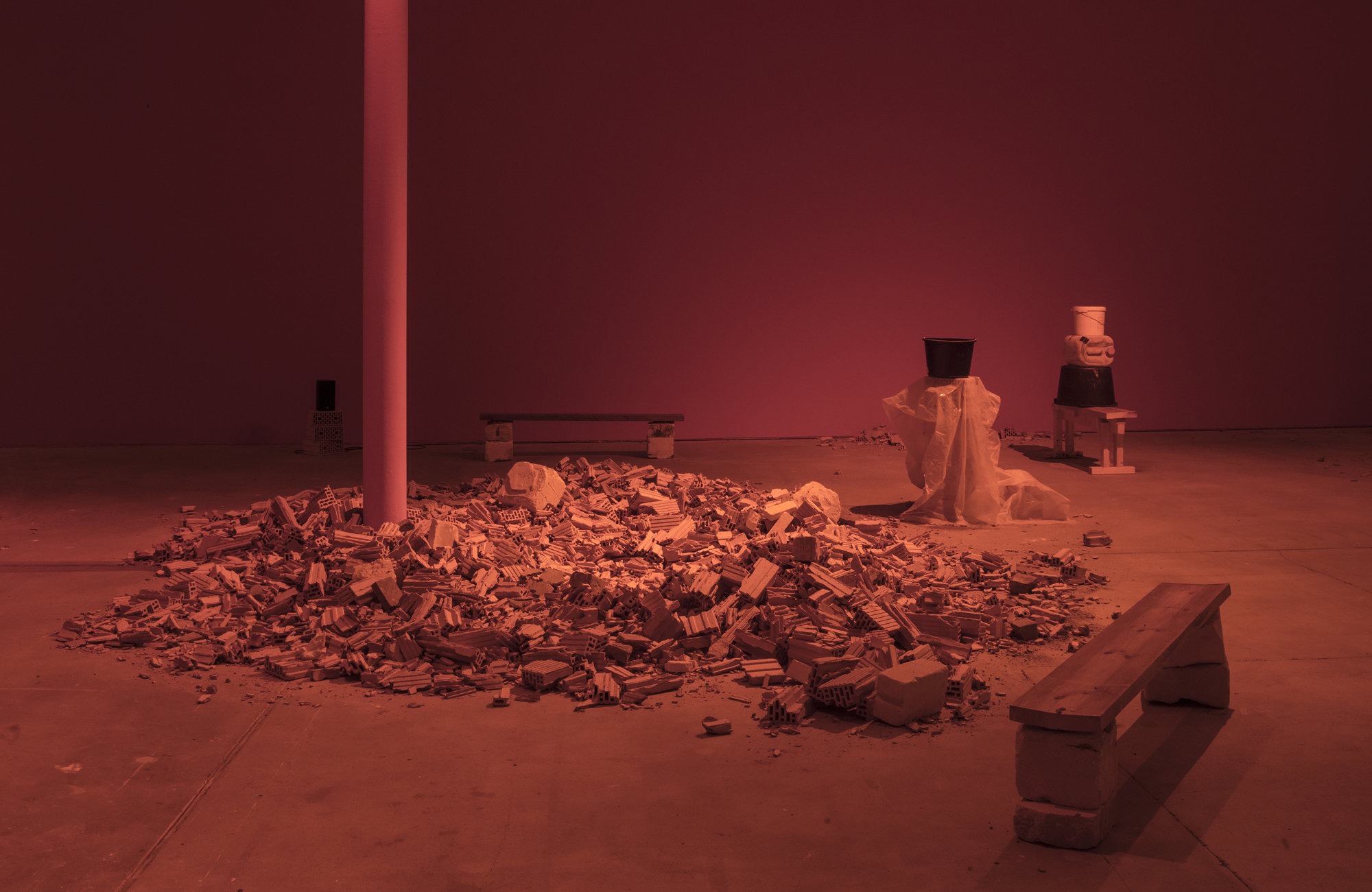 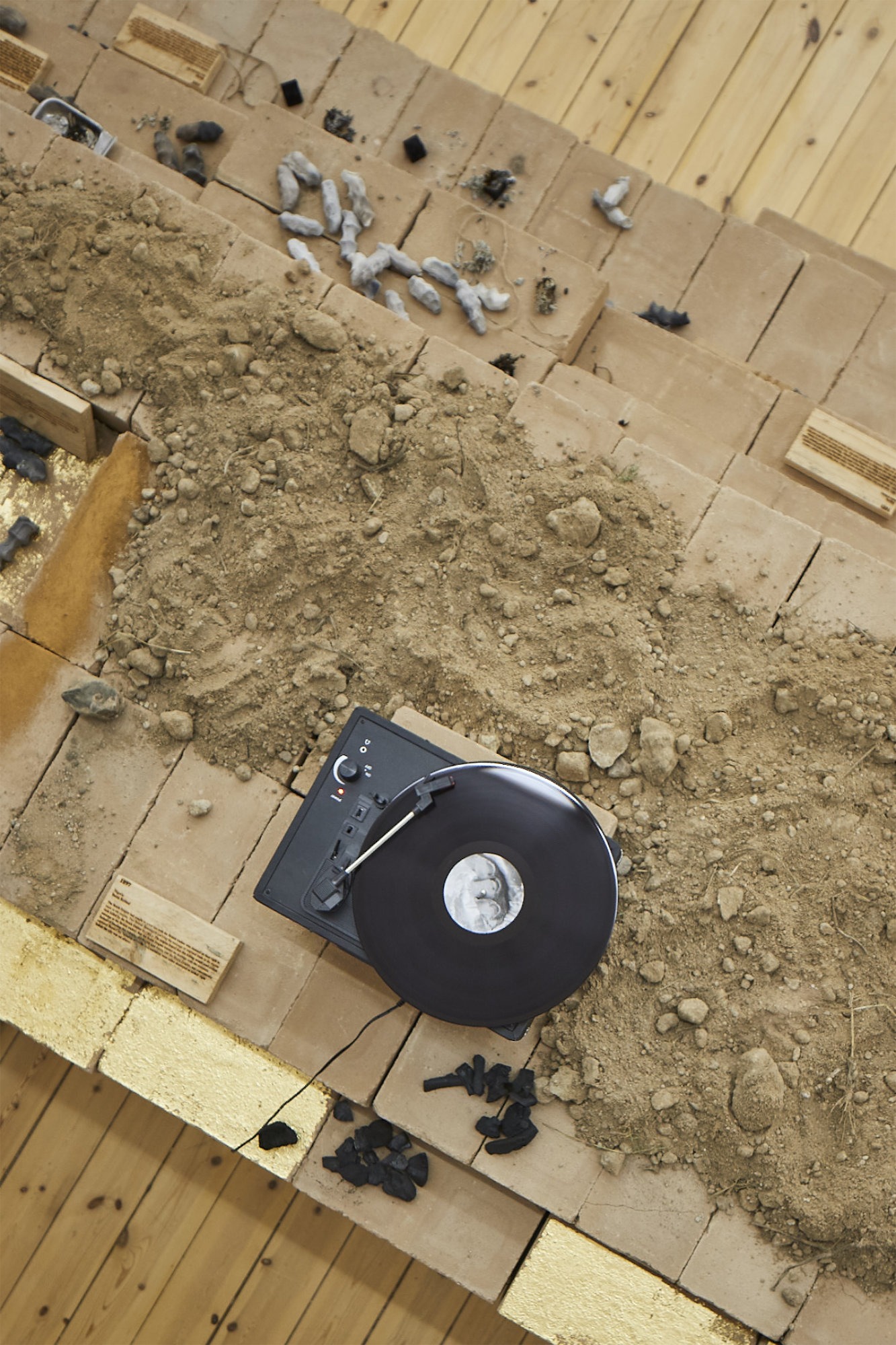 Dineo Seshee Bopape, footnotes (The struggle of memory against forgetting), 2018, installation view, Galerie Sfeir-Semler, Courtesy of the artist and Galerie Sfeir-Semler
In Dineo Seshee Bopape’s haunting installations and videos, the history of her native South Africa prompts reflections on memory and hegemony over land and bodies in relation to the lived experiences of African people (and also a beauty). Her work is informed by her quest for a visual, acoustic, and material language that evokes an autochthonous aesthetic. It articulates (particularly) the African diaspora’s peoples’ resilience and healing as well as their sustained energies of resistance to and emancipation from and traversing ‘through’ the violence of the white supremacist capitalist patriarchal matrix. Bopape makes art out of carefully selected everyday materials such as soil, clay, fabric, plants, containers, paint and digital media. Their material and symbolic properties often appear in conversation with ideas about politics, aesthetics, the metaphysics of self/thing/spirit and relationality , sovereignty, presence, home, land and waters, language, song, and memory ...

At the Secession, Dineo Seshee Bopape has developed a new site-responsive installation that transports visitors with its intense physicality. The exhibition space is kissed with pink light and filled with the buzzing of honeybees. Cupolas and knee-high walls made of pressed clay speak the language of that ephemeral thing brought forth and housed through form via the architecture of open-air enclosures/courtyards in some traditional African villages (reception area, courtyard, court, outdoor prayer enclosures). These create a flowing spatial spiral movement and structure between inside and outside, to the work’s center, and offer an entrance ... a portal. Circular depressions in the floor at one of the centers of the ensembles mirror a cosmic constellation and form linkages to earlier generations of works by Bopape. Like the clay bowls and vessels they act as containers, receptacles, orifices or invocation instruments and monuments to invoke amongst others, ideas of the feminine and ... satellites (of home: home ground/ home soil).

Bopape’s constellation of elements is fraught with social, political and symbolic signification. Among the different knowledges she draws on is the ancient Southern African creation story that, when rock and fire collided, water was born. The story, like much indigenous knowledge and modes of being, became besieged and suppressed during Western Imperialist colonization/colonial eras and was read to be contesting the rational/European Enlightenment project, the Modern, the ‘Christian’ ... Western European political identity ... Like any creation story, it is a source for identity and orientation towards the world. How does one translate this story of the beginning of the world to the now? Bopape’s approach as an artist is an intuitive journey through it, focusing less on representation but ‘relations’ at play. To her it presents possibilities to read and ‘revision’—dream anew events—in the layers between the sky and the earth ...

In her installation, Bopape creates an interchange of experience and meanings as springboard of another rationality as well as medicine for the feminine ... The multiple connections of matter, life and spirit are sung through the exhibition title Lerato le le golo (... la go hloka bo kantle) [a big love (... that has no outside)]. The poetic line in SePedi—Bopape’s mother tongue of Southern Africa—refers to the relation between things—an unconditional love ... A feeling overflowing in the smell of rain on heat-soaked African soil ... Pula (Rain), precious in the land of her birth, is synonymous with life, fertility and wealth. In SePedi, it is often eulogized in songs as a comforting presence/witness, event (pula ya medupi). There is a sensuality of it oft referenced in coming-of-age ceremonies ... and those celebrating land and fecundity ... also in dialogue with various indigenous stories, an expression of the fertilization of the ground by the sky via rain, and often involving the serpent of creation ... something about regeneration is at play here.

Dineo Seshee Bopape was born in 1981(1974 in the Ethiopian calendar), the year of the golden rooster, on a Sunday. If she were Ghanaian, her name would be Akosua/Akos for short. During the same year of her birth, there were perhaps 22 recorded Atlantic Ocean hurricanes and 4 Indian Ocean cyclones close to Mozambique. The Brixton riots took place; the song “Endless Love” is popular on the airwaves; Umkhonto We Sizwe performs numerous underground assaults against the Apartheid state. The Boeing 767 makes its first air flight, Zaire is the premier producer of the world’s cobalt, Winnie Mandela’s banishment orders are renewed for another 5 years; in Chile, the Water Code is established, separating water ownership from land ownership; two people were injured when a bomb exploded in a Durban shopping center; Bobby Sands dies; there was an earthquake that killed maybe 50 people in China; an International NGO Conference on Indigenous Populations and the Land is held in Geneva, the name “internet” is mentioned for the first time; there is a coup d’état in Ghana; Princess Diana of Britain marries Charles; Bob Marley dies; an annular solar eclipse is visible in the Pacific Ocean. Apartheid SA invades Angola; AIDS is identified/created/named; Salman Rushdie releases his book “Midnight’s Children”; Greece is struck by three earthquakes over a period of 11 days; the slave trade is officially abolished in Mauritania; the remains of the Titanic are found; Muhammad Ali retires; the USA and Japan are in the leading position in the seabed-mining industry, the 15th IVF baby is born, Thomas Sankara rides a bike to his first cabinet meeting; Machu Picchu is declared a heritage site; there is a drought in Chad, New Zealand recognized 16 rivers and lakes as “outstanding” and protected them in perpetuity. Her paternal grandmother dies affected by dementia; MTV is launched; it is said that right whales born in that year are taller than right whales born since. Other concurrent events of the year of her birth, and of her lifetime, are perhaps too many to fully know; some things continued, some transformed, some shifted, others ended (?), some began... The world’s human population was then apparently around 4.529 billion ... today she (Bopape) is one amongst 7 billion—occupying multiple adjectives.

Programmed by the board of the Secession
Curated by Annette Südbeck
www.secession.at