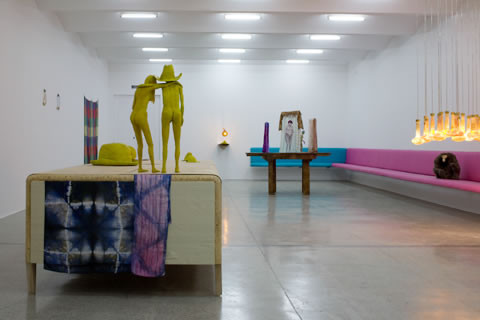 Francis Upritchard creates sculptural installations in which human figures, painted in bright colours, inhabit a world replete with found objects and everyday items, modified to meet their needs. The inhabitants and their objects are shown on specially produced or found pieces of furniture. Paying as much attention to the furniture, to its careful refurbishment as to the figures themselves, her work gives equal weight to art, craft, and display: the design and staging within the exhibition space is an integral part of the work.

Upritchard suspends the usual attributions of value to specific materials and contexts; her figures, whose age, cultural origin and hierarchy is unclear, question the viewer's perceptions and preconceptions about worth. Her arrangements form artificial universes in which the figures embody the human condition in all its diversity – appearing introverted, cheerful, miserable, or uncomfortable. Upritchard cleverly perverts the usual view of products of human civilization by transforming everyday items from Western culture into instruments of cult ritual for fictitious archaic peoples, with badminton rackets as scepters and industrial imitations of Victorian vases as urns

For the Secession, Francis Upritchard is developing a new installation whose themes include the exhibition history of the institution as well as Hippie or New Age counter-cultures. With her installation IN DIE HÖHLE in the gallery space, Upritchard questions hegemonic attitudes of mainstream culture, and its definition, for example, of the ‘exotic’, or the differentiation between ‘critical’ and ‘decorative’.

By freely mixing up times and cultural references, Upritchard is interrogating the idea of popular art: Confronting banal notions of ‘culture’ with its counters and opposites, the tyranny of common-sense fragments to many possible readings and interpretations. It's all in together, lit by chandeliers modeled on the designs of Wiener Werkstätte - figures prised from their contexts (and sometimes from the grip of their original works, like Gustav Klimt’s Beethoven Frieze or Sol LeWitt's wall paintings), then loaned new stories: Maoris in Tartan, waiting for the End; imaginary members of the long-forgotten cult of a family member; sacred regalia rendered in spent cigarettes, Japanese and Indian traditions merged (as they have in the past) with Hippies; Cowboys hunting for the right hat; our beautiful dropouts and dregs, facing down the divine.

Francis Upritchard (*1976 in New Zealand) lives and works in London.