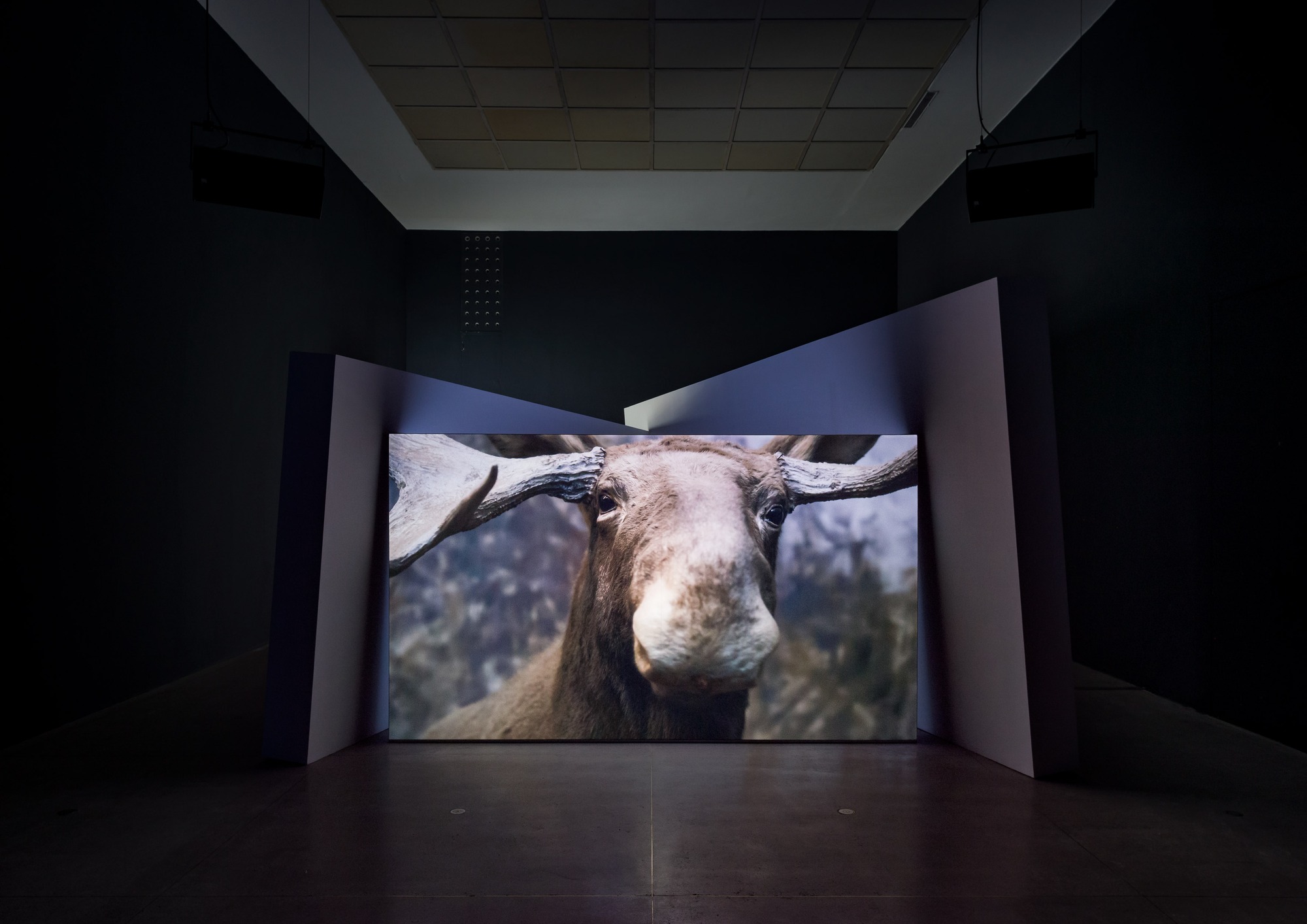 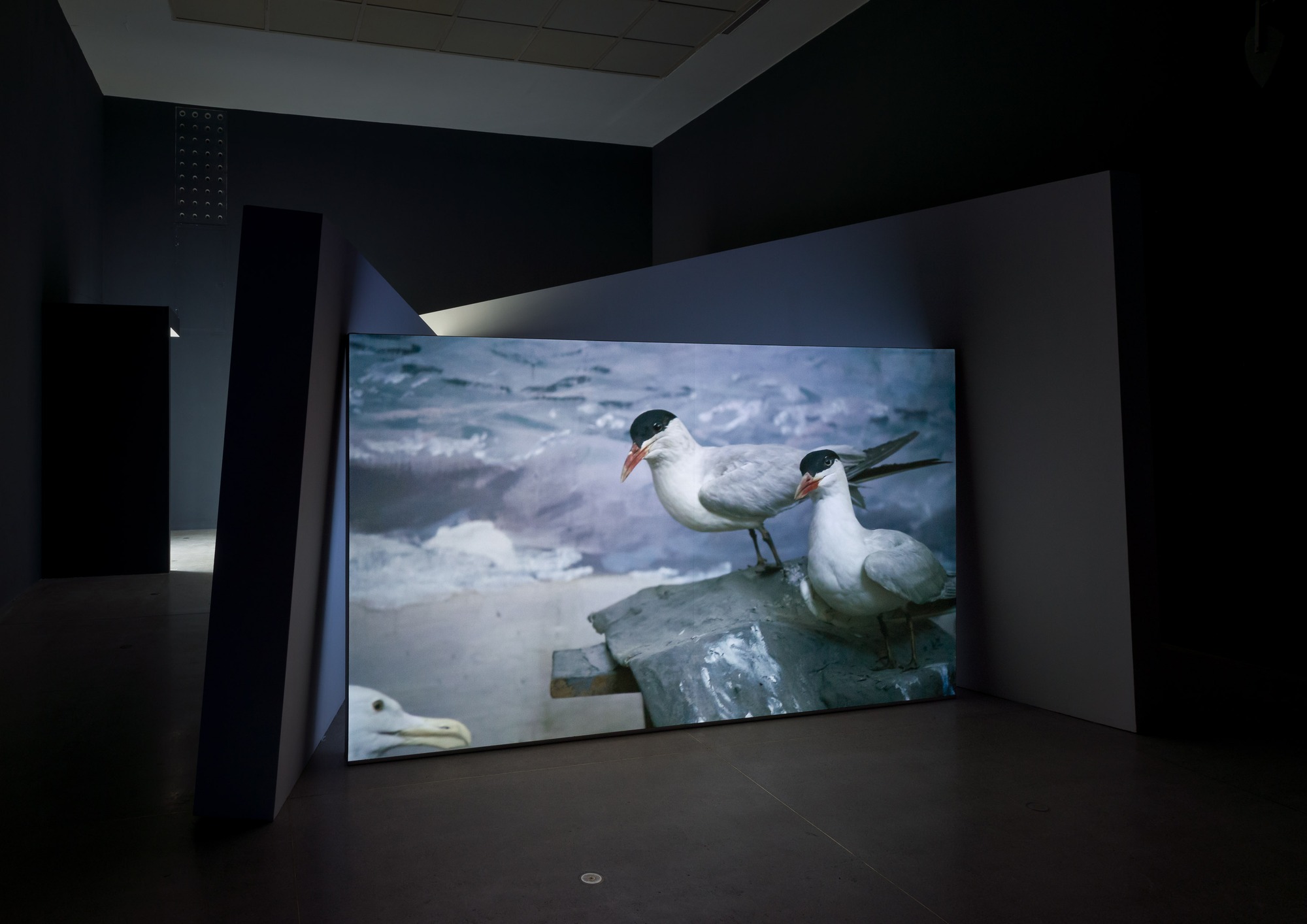 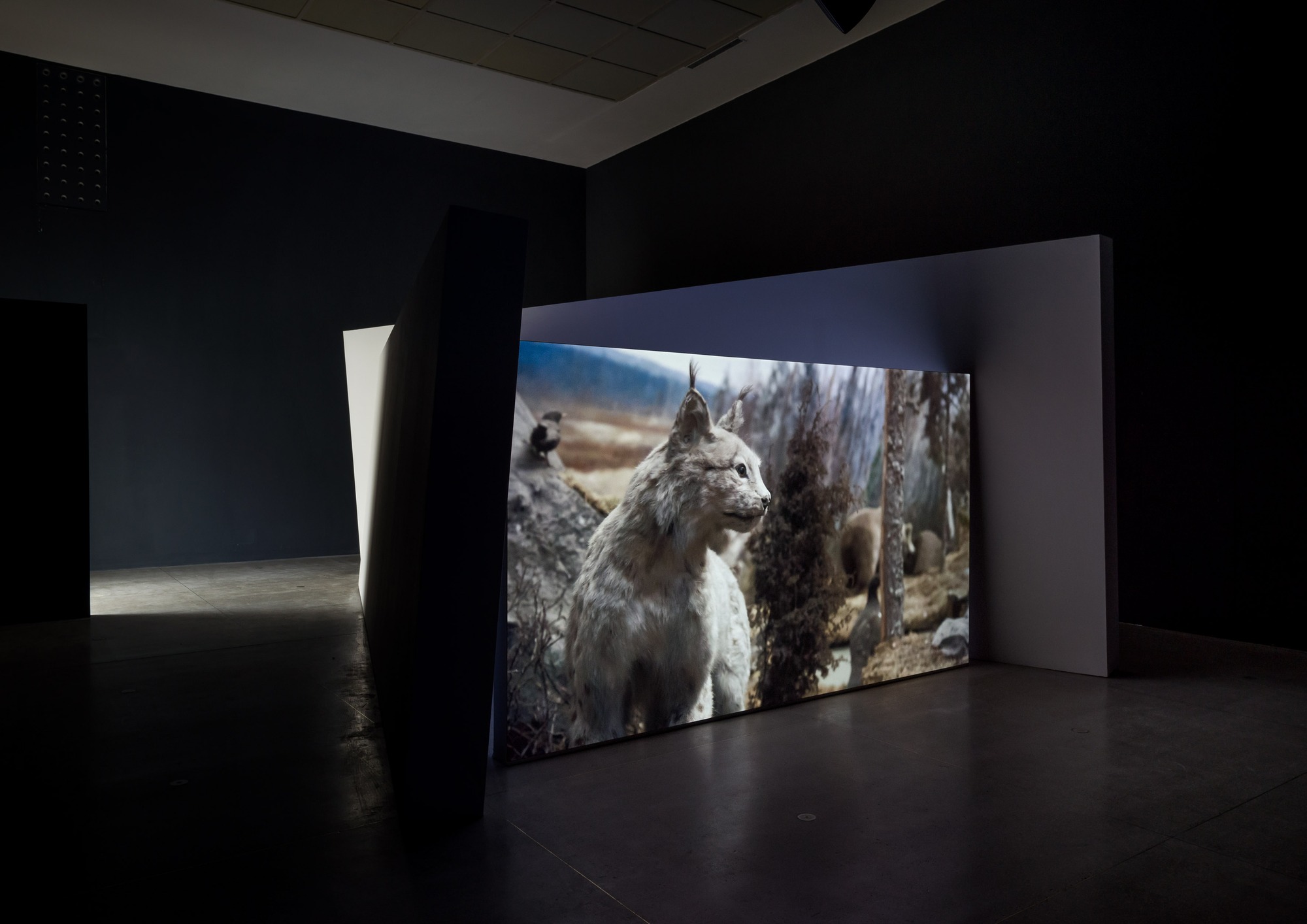 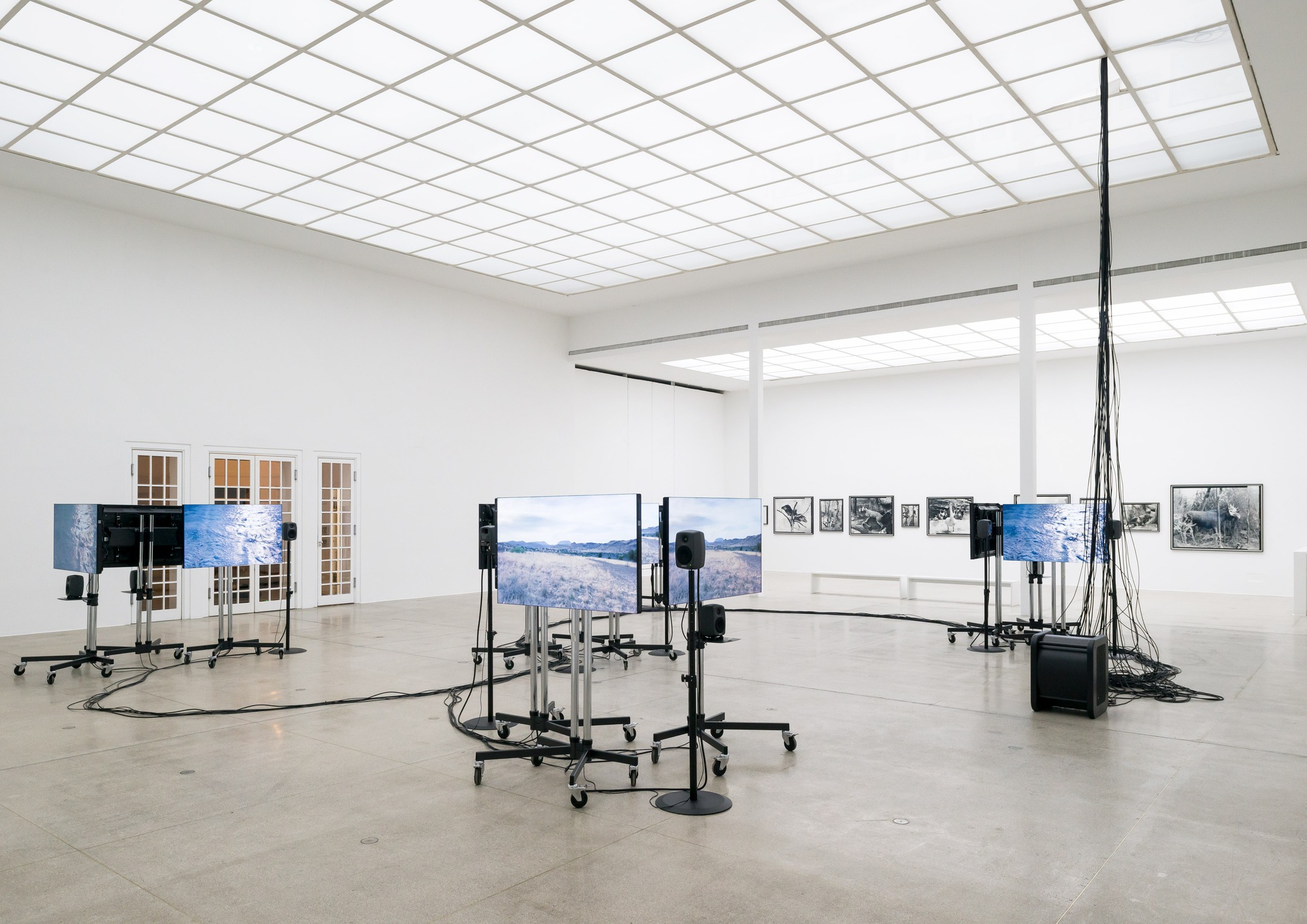 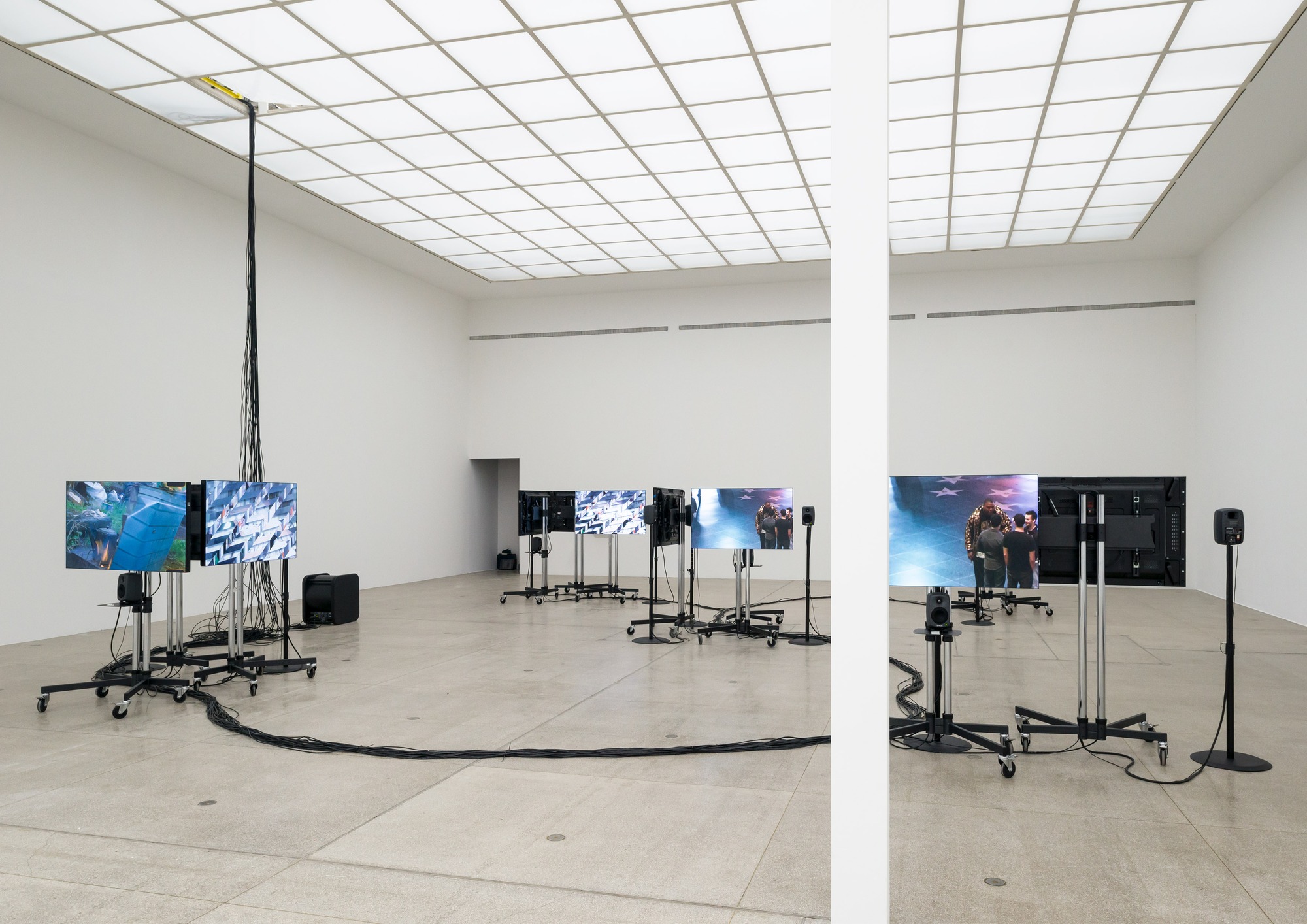 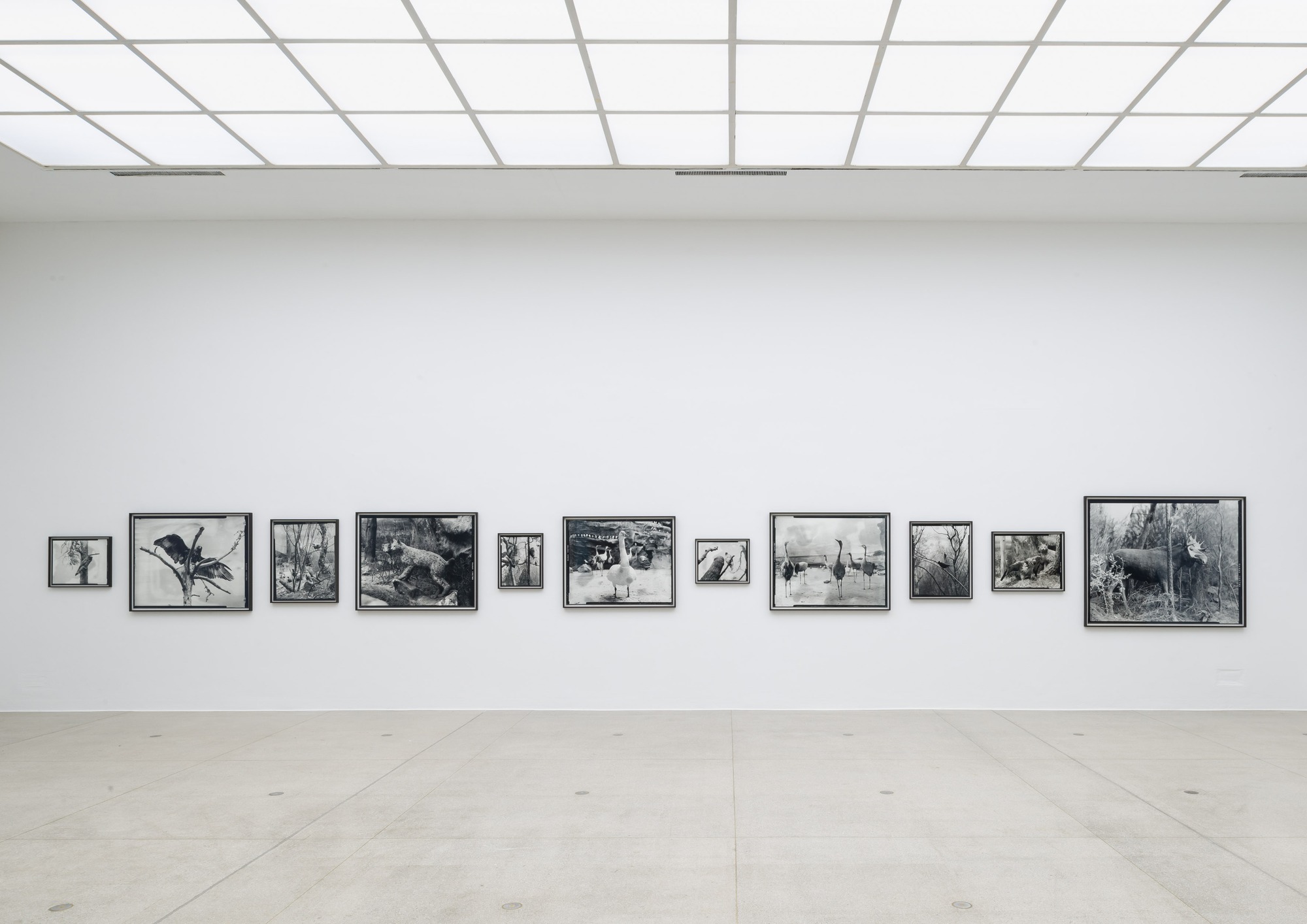 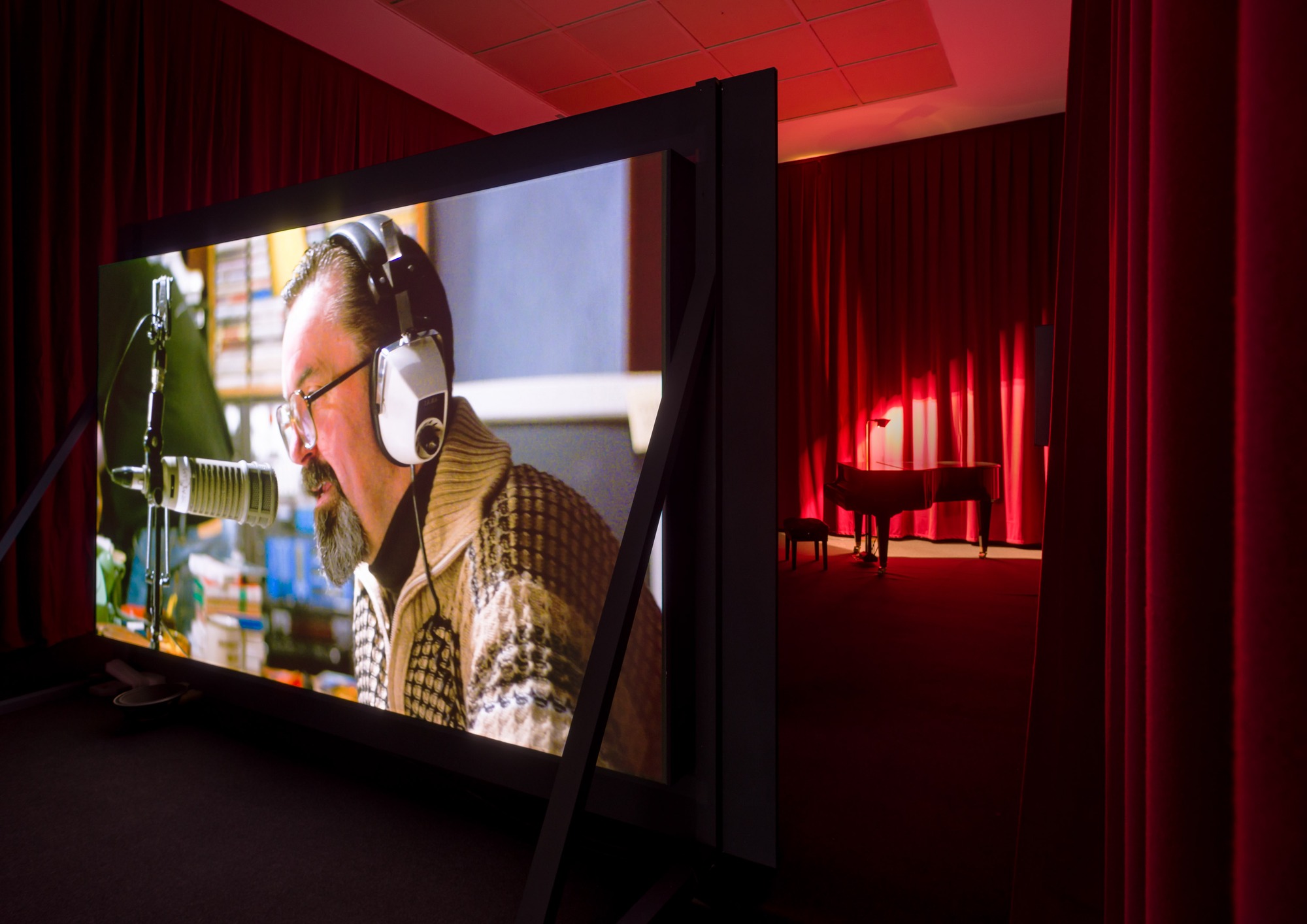 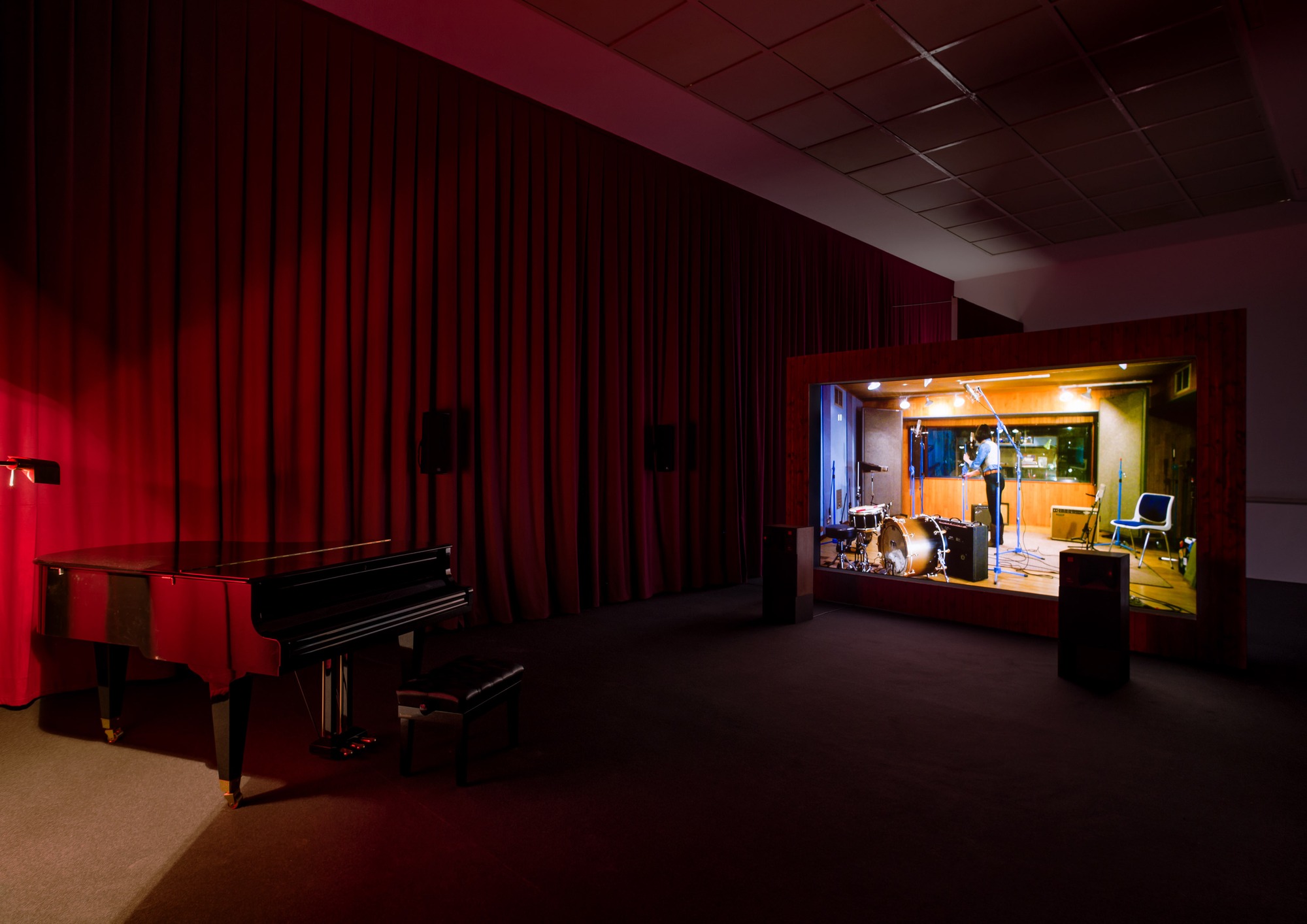 Gerard Byrne uses video, film, photography, and performance art to address fundamental questions concerning the relationships between images and time. His exhibitions play with display formats and reflect on the changing technical and cultural realities underlying his work and its presentation. Upon all the living and the dead gathers Byrne’s most recent works for the first time, activating a dialogue between the proto-cinematic moment of Jielemeguvvie guvvie sjisjnjeli (2016), the evasive temporality of In Our Time (2017), and A Visibility Matrix (2018), a new work co-authored with the artist Sven Anderson that borrows aggregation methodologies from early media art and cybernetics to picture current conditions of visibility. Across the works, underlying patterns and recurring interests become visible.

Each of the three video works in the exhibition occupies time in a non-narrative way, permuting, in perpetual oscillation, between the specificity of the photographic subject depicted and the generalized conditions of its reproduction. The works’ playback in the gallery has the tempo of noisy, relentless machines; their durations are oblivious to the viewer’s stamina. In contrast, the photographic work Beasts is testament to in-animation; each print pictures the carefully poised relationship between photography and deadness. Upon all the living and the dead. places these different works in direct, dense proximity.

Jielemeguvvie guvvie sjisjnjeli (Film Inside an Image) (2016), the earliest work on view, is a single-channel video that combines attributes of film, still photography, and sculpture. It was filmed in the Biologiska Museet in Stockholm. Adjacent to it is a series of black-and-white silver gelatin photographs entitled Beasts (2018) which were also made in the museum. The Biologiska Museet was conceived to house a building-size 360-degree diorama depicting a panoramic sweep of the Nordic wilderness, in an elaborate mise-en-scène combining taxidermy with a painted backdrop. The museum remained almost unchanged between 1893 and its unexpected closure midway through Byrne’s production, in 2017. The artist’s interest in the museum was first inspired by the peculiar visual appearance of the diorama, which, unusually, is illuminated solely by natural light entering from roof skylights. In winter, the museum could open for only a few hours around midday. For Byrne, this dependence on daylight blurred the distinction between museum and camera. With its skylights functioning as lens aperture and its diorama of taxidermy animals poised in frozen photographic stasis, the Biologiska Museet seemed as much a camera as anything else. Byrne made a film inside the diorama, which uses sound and motion to ponder such photographic attributes as stasis itself, seamlessness, dust, and the shifting historical contingencies that determine what is a photograph at a given cultural moment. The installed work comprises a film made inside a still image, presented in the gallery as an object. The work’s title, in South Sami, an indigenous language of the wilderness depicted, reveals a peculiar doubling, as the native word for “film” literally translates as “life-image.”

In Our Time (2017), also a single-channel video installation, depicts a U.S. commercial radio studio of the 1970s or 80s. An elaborate multi-channel soundtrack accompanies the video. The “on-air” sound—what listeners would hear on their radios—plays on two vintage speakers set in front of the projection, while the “off-air” soundtrack is supplied by speakers surrounding the room, engendering a doubled acoustic space. Additional props such as a piano, microphone stands, and a floor lamp mirror this doubling and heighten the sense that the space the work occupies is not easily defined.
In ways In Our Time ties in with Byrne’s well-known “magazine works” such as 1984 and Beyond (2005– 2007) and New Sexual Lifestyles (2003): he recruits actors and gathers costumes and props to create painstaking reconstructions of a particular moment in time, mostly from the period between the 1960s and the 1980s. In all of these works, he references popular culture to pose questions about communality—what, if anything, do we share? In the earlier works, this period mise-en-scène was often unexpectedly interrupted by Brechtian disjunction. With In Our Time, the illusory sanctuary of the gallery itself is breached by a simple device—as the radio DJ depicted goes about his broadcast routine of talk, music, and occasional time-checks, it becomes clear that the fictional time he occupies directly syncs with the real time of day at the Secession, provoking questions about the form and boundaries of the work itself. Classic broadcast radio produced an indiscriminate communality among listeners; that is no longer the case in the age of social media and targeted advertising. In Our Time reminds us that the gallery space still retains the capacity of undifferentiated appeal to a communality amongst its audience.

Similar themes are also in play in the exhibition’s most recent work, A Visibility Matrix (2018), a multi- screen video installation by Byrne and his frequent collaborator Sven Anderson. The work returns to the instincts of abandoned art and technology projects from the 1960s–1980s, which explored visual excess and hyperstimulation decades before the Internet and before multi-screen video displays expanded into the vernacular backdrop of everyday public and private life. The installation speculates on an alternative to the composite formed by subject, smartphone, and online video-sharing platform that has come to represent the current standard of visibility. The work is assembled from video material compiled through an associative network of over seventy collaborators including artists, visual anthropologists, cinematographers, and documentary filmmakers from around the world. A Visibility Matrix manifests as a network of screens and spatial gestures in which images are duplicated, mirrored, and displaced. These gestures unfold over the duration of the exhibition, pursuing both repetition and re-assembly, revealing a system that speculates on the possibilities of video not as passive image but as active signal and on the gallery as a site of condensation.

Upon all the living and the dead. is both intricate and generous, an archaeology of the dynamic relationship between images and time.

A Visibility Matrix was supported by Arts Council of Ireland / An Chomhairle Ealaíon.
www.secession.at