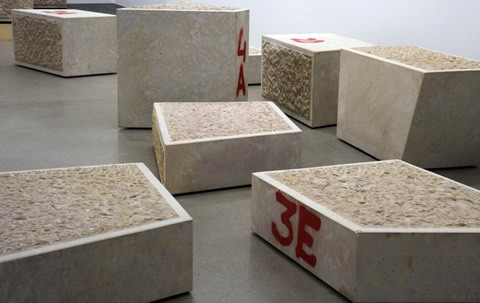 Ibon Aranberri's art presents a critical exploration of the complex interconnections between aesthetics, history, and politics. He devotes particular attention to the exhibition format, which he regards as highly significant aesthetic and spatial event that functions like an organism: the autonomy and individuality of the various works is subordinate to the interplay of the interconnections, affiliations, and contradictions between them.

In his exhibition Finite Location at the Secession, Aranberri slips into the role of curator to implement a reconfiguration of existing works. With a view to the idea of an imaginary landscape, he sets up the large-format photography installation Política Hidráulica (Water Policy, 2004–2010) face to face with the sculpture Found Dead (2007) and the empty casting mold for a bronze sculpture of an "unknown philosopher". The common denominator of these three works lies in their original readings, in which they revolve around themes of the landscape, the monument, and the representation of power. The title Aranberri has chosen for the exhibition, Finite Location, emphasizes the temporary nature of this installation, which contains the seeds of its dismantlement even at the moment it is put together. In designing the presentation, he creates a complex whole that sublates the original contexts and intentions of the individual works while also undermining the cycle of the production, presentation, and commercial valorization of works of art.

Ibon Aranberri was born in Itziar, Basque country, in 1969 and lives and works in Bilbao.

Invited by the board of the Secession
www.secession.at