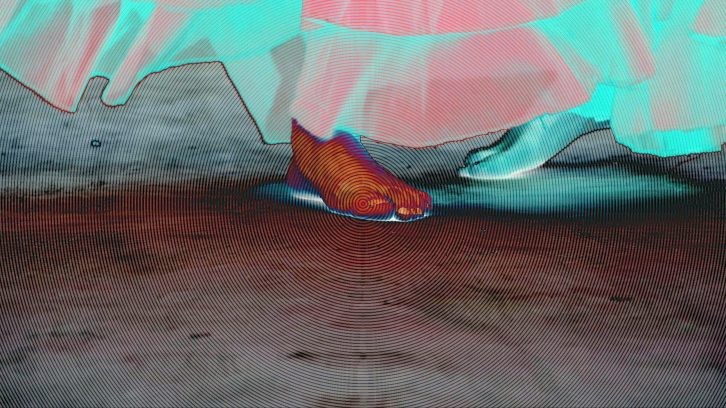 Belonging to two distinct artist generations and contexts, James Richards and Leslie Thornton developed their first collaborative project Crossings in 2016. This video installation materializes an intense phase of exchange between the artists, both enabled and limited by exchanging footage via online sharing platforms. Thornton, a media artist who herself was influenced by Paul Sharits, Yvonne Rainer, and Joan Jonas often deploys projections complicated by ample sound-image interactions. Likewise, musical composition is key to Richard’s practice. Both artists’ work is motivated by their understanding of cinema and video as original languages and forms of thinking.

The work’s title evokes the artists’ mode of working together, traversing their practices and sharing their views. Equally, it alludes to CROSSROADS (1976), a short film by Bruce Conner that reworks footage of the U.S. 1946 nuclear tests in the Bikini Atoll. Conner confronts the viewer with slow-motion imagery which is at times out of sync with a soundtrack composed by experimental music pioneers. Similarly, the strictly organized frame of Richard and Thornton’s video allows the artists to juxtapose, modulate, and iterate recurring image fragments and sonic impulses. Assembled from both found material and original footage from their own extensive archives, Crossings moves through multiple stages and eventually morphs into an audiovisual note on artistic production and collaboration. (Text: Christoph Chwatal)

Leslie Thornton born in 1951 in Knoxville (Tennessee), lives and works in New York.
James Richards (born 1983) is a British artist who lives in Berlin and London.
www.secession.at