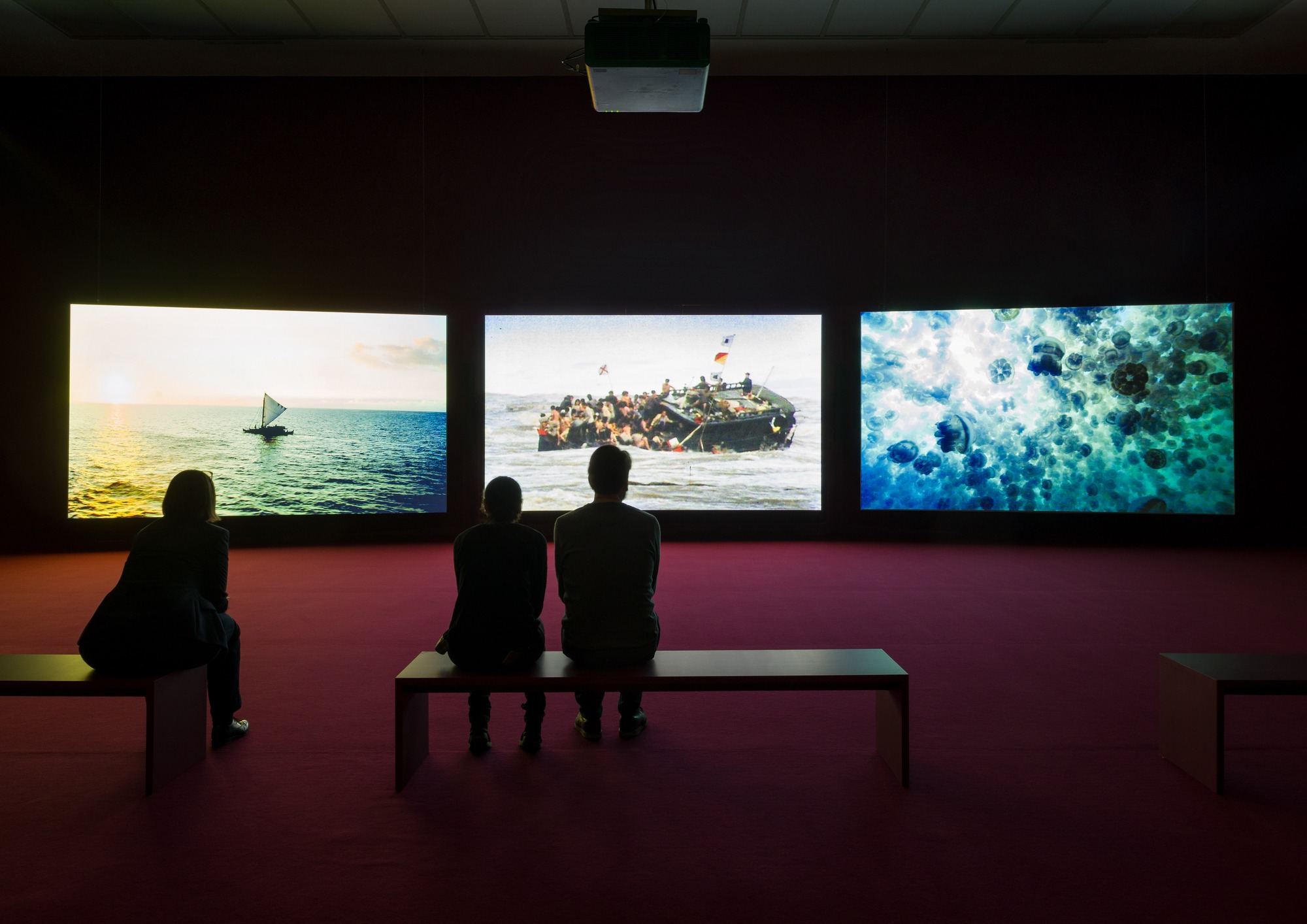 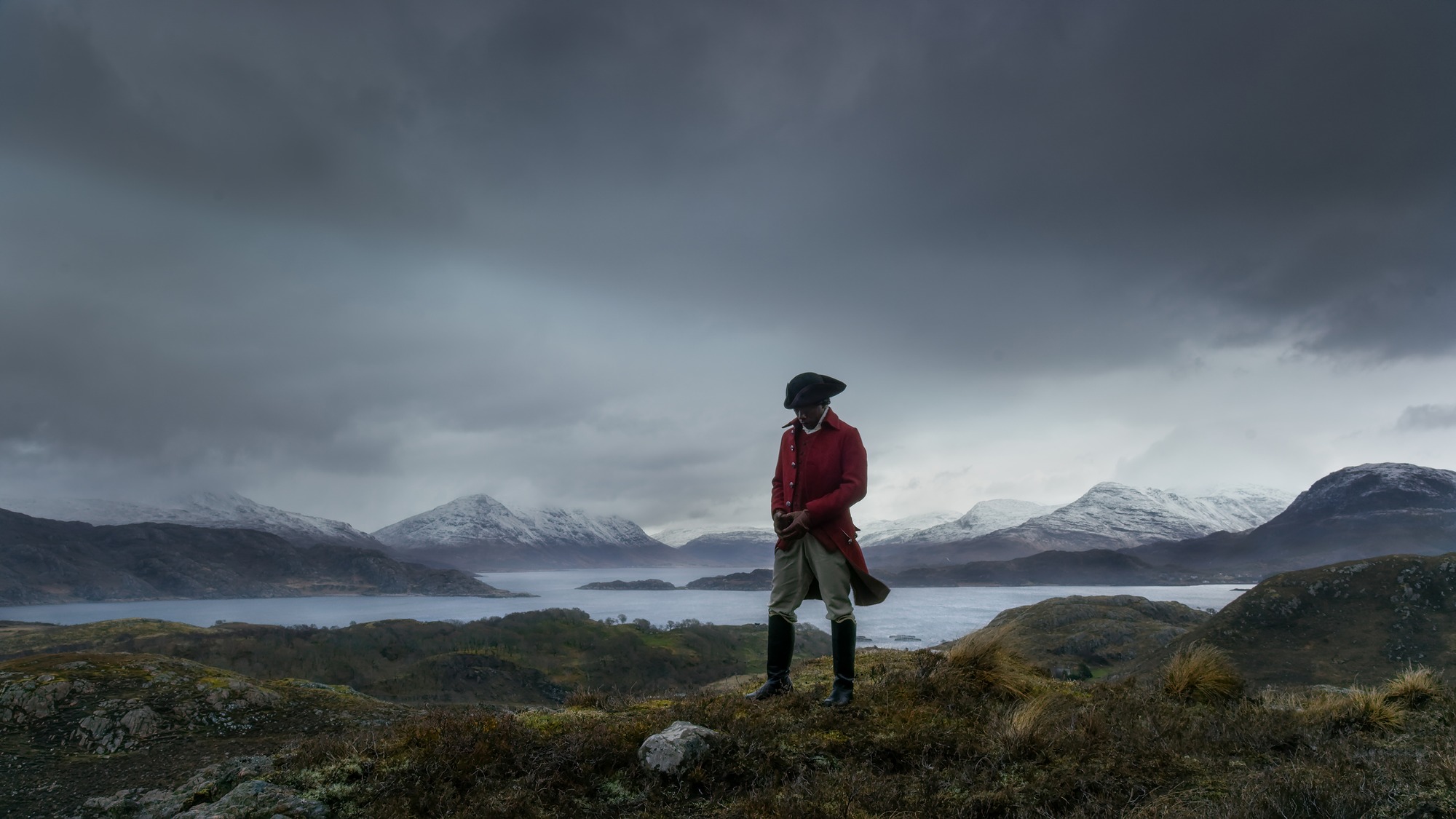 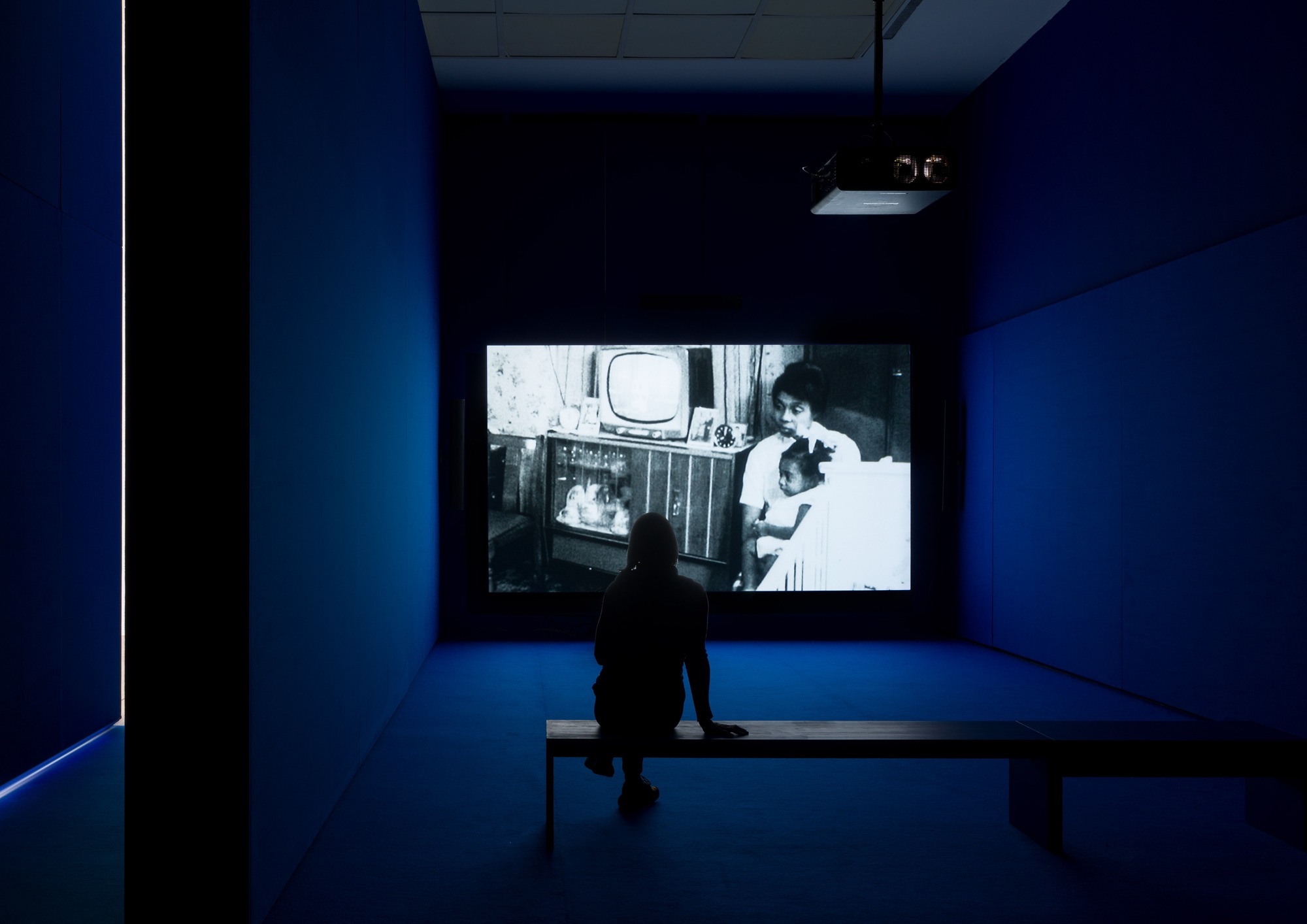 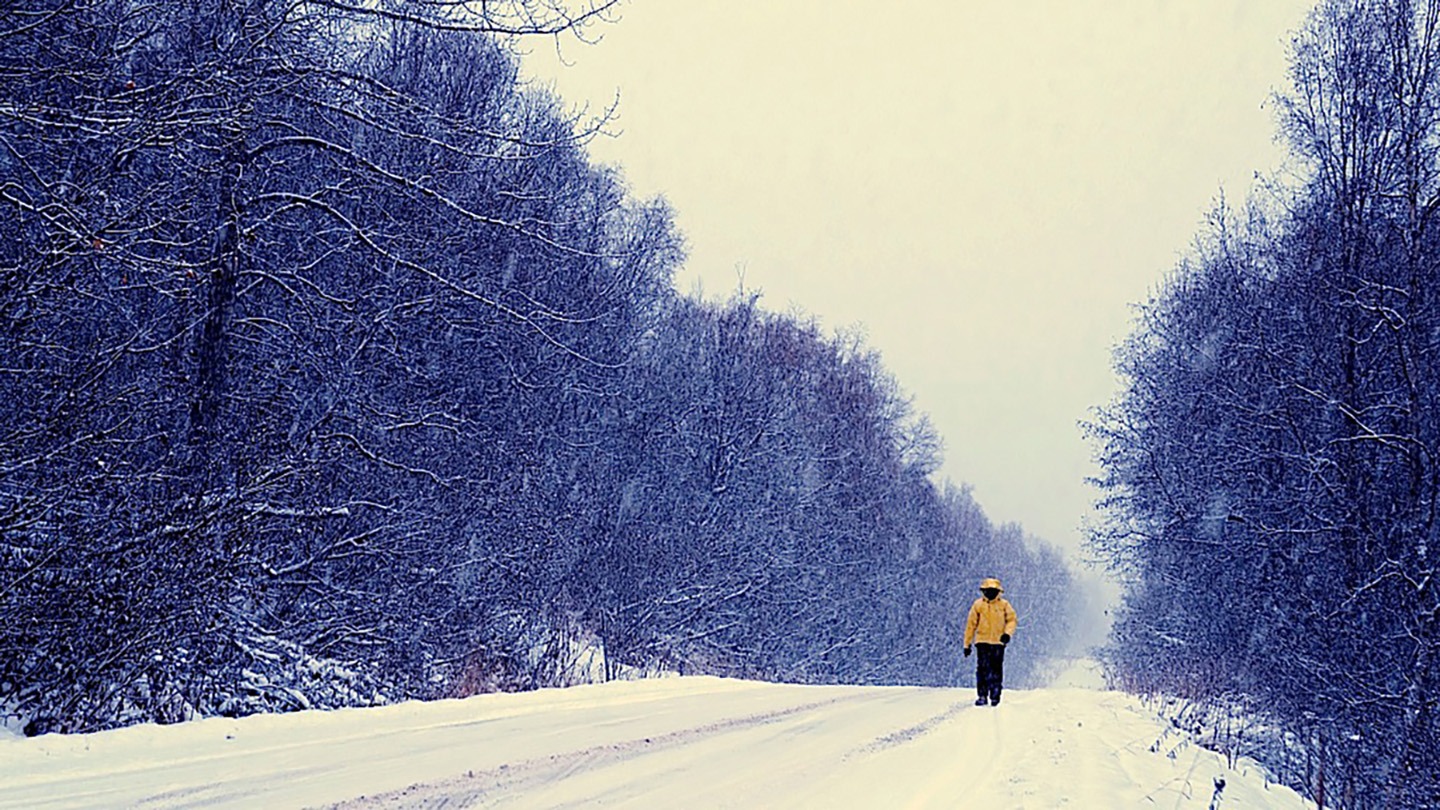 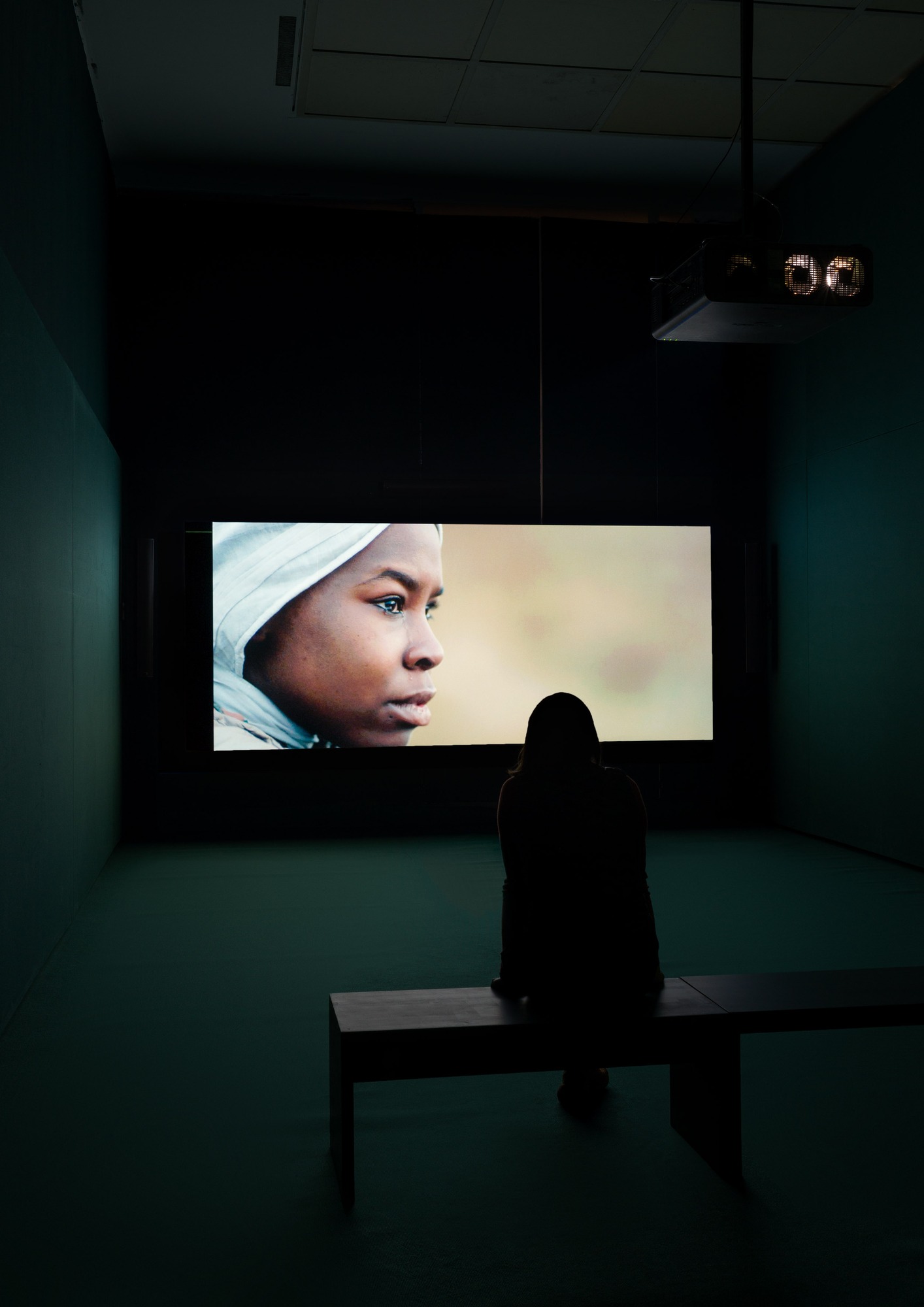 The filmmaker and screenwriter John Akomfrah’s atmospheric films probe the structure of memory, the diasporic experiences of migrants, and the historical, social, and political roots of postcolonialism. A founding member of the influential Black Audio Film Collective (1982–1998), he continues to work with his long-term creative partners David Lawson and Lina Gopaul. Early on in his career, he established the multifaceted visual style of his filmic essays, for which he combines archival material from different periods of history, writings from literary and classical sources, and newly shot sequences in distinctive and poetic montages. His editing consistently defies monolithic narratives and historical chronology. Many of the artist’s immersive video installations are multichannel visual compositions, unfolding contrasts and dialogues between image and sound to explore the implications of various junctures and stories.

At the Secession, John Akomfrah presents three film installations whose themes complement one another: the three-channel projection Vertigo Sea (2015) and the two single-channel pieces Peripeteia (2012) and Mnemosyne (2010). A recurrent motif in his art that connects all three works on film is water, which acts as a reservoir of recollections; in the immensity of the ocean, it also marks the scene of the colonial conquests and the transatlantic slave trade as well as contemporary migrant flows.

In Vertigo Sea, the artist moreover brings climate change into focus, scrutinizing the complex interconnections between humanity’s devastation of the natural world and its self-destructive impulses. Stunning footage of natural scenes serves as the backdrop for a multifaceted reflection interweaving history, fiction, and philosophy.

The palette of images includes found material from the BBC’s archive of nature films as well as excerpts from TV reportages on the whaling industry and refugees on the Mediterranean Sea, plus new footage that the artist recorded on the Isle of Skye, the Faroe Islands, and in northern Norway. The montage is rounded out by a soundtrack mixing whale songs, music for string orchestra, and the noise of gunshots and explosions with readings of masterworks of literature in which the sea plays a salient role such as Herman Melville’s Moby Dick, Virginia Woolf’s To the Lighthouse, and Heathcote Williams’s poem Whale Nation.

One character who appears again and again is a man in a historic uniform. He is an embodiment of Olaudah Equiano (1745–1797), a slave who became a freedman, a leading champion of the anti-slave trade movement, and the author of an autobiography that was widely read in his time. Born in the Igbo region in today’s Nigeria, he was sold to slave traders when he was ten, shipped to America, and resold several times before managing to buy his freedom when he was in his early twenties. Determined to choose his own path, he worked on various merchant vessels, participated in an expedition to the Arctic, and spent his later years in England. Akomfrah renders him as a lonely and forlorn figure gazing out at the sea, a compositional type that is reminiscent of the romantic paintings of Caspar David Friedrich and makes Equiano a potential figure of identification for the audience. Following his gaze, we contemplate the vast complexity of the reality the work portrays, in which sublime beauty coexists—indeed, coincides—with existential terror.

Nimbly juxtaposing what would seem to be incompatible narrative threads, Akomfrah’s Vertigo Sea limns unimagined interpretive horizons. As the title suggests, the different strands coalesce in a dizzying maelstrom that surges across time and space to expose interconnected geopolitical conflicts, the history of colonialism, slavery, and migration, which has lost none of its power to inflict pain, and the subjugation of nature at the hands of the modern capitalist society.

The two other films, Mnemosyne and Peripeteia, are meditations on life in diasporas and the facets of recollection or, then again, of historical oblivion. Akomfrah’s point of departure in Peripeteia are some of the earliest depictions of Black people in Western art, such as Albrecht Dürer’s character studies Portrait of an African Man (1508) and Portrait of Catherine (1521). Inquiring into the fates of the sitters and reimagining their stories, he shows the anonymous figures’ wanderings: wet to the skin and seemingly lost, they trudge through a desolate landscape. The film reminds us of the countless Black lives that went unrecorded and unremembered, an obliteration of identities reflected in the longstanding marginalization of images of Black people in the historiography of art.

Mnemosyne, meanwhile, delves into the stories of postwar immigrants to Great Britain. Akomfrah divides the film into nine chapters, each of which is dedicated to one of the muses. In Greek myth, the muses are the daughters of Mnemosyne, the goddess of memory. Creatively reassembling archival footage from a wide range of sources, the artist probes the nature of memory and urges a writing of history that takes into account both personal and communal recollections. He combines the historic material with shots showing Black people in snowy sceneries. Like Equiano in Vertigo Sea and the anonymous characters in Peripeteia, they appear in places where, even though we know better, we do not expect to see them. Underscoring the experience of dislocation and the loss of all personal moorings, Akomfrah spells out the ambition of his project: to resurvey and re-present Western cultural history from the migrant perspective.
www.secession.at