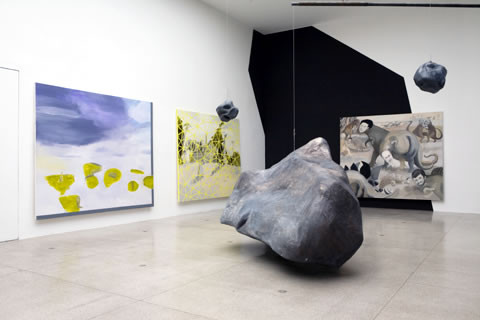 The predominant subject of the exhibition Human or Other by Katrin Plavčak in the main room of the Secession is the conquest of new spaces and the concomitant conceptions and fantasies of the other. The specially developed works include, in addition to numerous painted pictures, a series of moving objects, an outdoor work, and the video No New Colonies in cooperation with Johanna Kirsch, a music clip for the two artists’ song of the same name.
Contrary to the presumptions inherent in painting and its history in the twentieth century, often claimed to have ended, Katrin Plavčak works towards removing the boundaries of the medium. On the one hand she keeps painting open towards the mediatised environment, on the other she develops space-dominating pictorial concepts by means of juxtaposition and contrast, increasingly expanding painting into the realm of sculpture.
Katrin Plavčak stages her works at the Secession to create an ensemble that combines the colonisation of foreign countries, science-fiction space travel, human and extraterrestrial elements to create new narratives. The centrally positioned helium balloon, for example, is a reference to the pioneer of space travel Joe Kittinger, who ascended to a height of 35km in a balloon in 1960, returning to the ground in a free fall, while the steel-tube sculptures entitled Dreibeinige Herrscher / The Tripods go back to the figure of machines brought to life in the 1980’s science-fiction television series. In the painted pictures she combines a number of political allusions with the fantastic metaphors of modern-day chimeras and hybrid technology. Others are covered with abstract blinds, grids and webbed structures that prevent the accustomed, visual appropriation and require the viewer to redefine his position.
The tour in the Secession kicks off with an outdoor work on the façade: Plavčak puts a giant moustache on the building. An emblem of male power and a comedic accessory at one and the same time, the moustache – in the form of a quick and simple scribble on posters – is also one of the “primal interventions in the public space” (KP).
Katrin Plavčak’s images are characterised by a play of the inevitability of associations. In a free process, she transforms collected media finds and observations, combining them with her own inventions, distorting and remixing them. Characteristic of her depictions is an effect between realism and abstraction, vision and banality, fantasy and caricature.

Exhibition discussion
Thursday, March 12, 2009, 6.30 p.m.
with Katrin Plavčak and Silke Otto-Knapp
An Event by the Friends of the Secession

Katrin Plavčak (b. in 1970 in Gütersloh) lives and works in Berlin and Vienna.