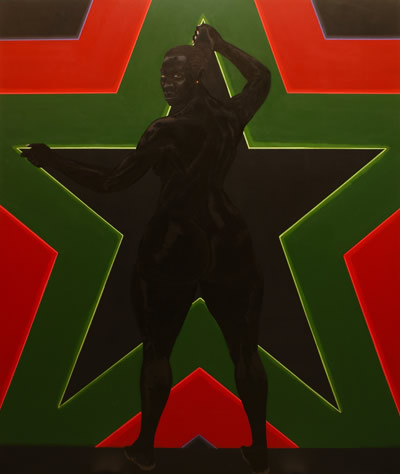 In his figurative pictures, many of which work with the conventions of history painting, the American artist Kerry James Marshall addresses the social and cultural experiences of African Americans and, more generally, the variety of ways identities are coded and marginalized within a dominant culture. His depictions of everyday life in urban housing projects (Garden Projects series, 1994–95) and middle-class living rooms decorated with pictures of revered civil-rights heroes (Souvenir series, 1997–98) as well as his double portraits in historic garb (Vignettes, 2003–07) pay homage to the utopias of the civil-rights movement and bring a confident and reflective approach to defining shifting ideas about integration and history, of individual fulfillment and freedom. The ambiguity of the scenes Marshall depicts and the way he depicts them always also raise the question of how we read images and what our judgment is based on.

Building on the logic of collage, Marshall has developed a complex pictorial language that crosses cultures by fusing references to Western art history with stylistic elements of a Black aesthetics. His art is also shaped by his painterly interest in the formal qualities of flatness. He has found a way to translate the reality of Blackness into his paintings by using shades of black that make figurative elements appear almost abstract, while his textures of drippings, spatterings, and brushstrokes disrupt the classical conception of spatial depth, suggesting a break with reality and the naturalism usually associated with history painting.

Kerry James Marshall, who was born in Birmingham, ALm (USA), in 1955, lives and works in Chicago (USA).
www.secession.at