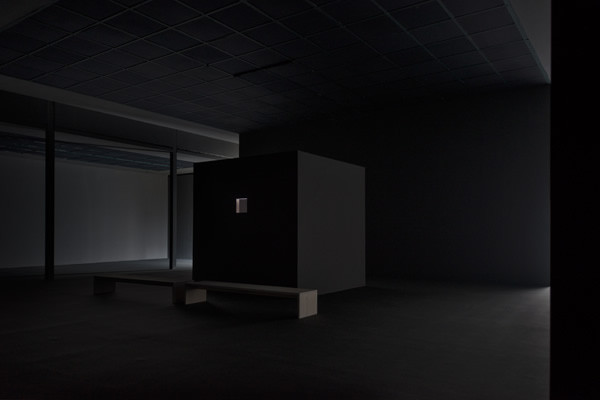 Mathias Poledna deals in his work with connections between art and entertainment, modernism in architecture, fashion and design, the language of film and the history of exhibition-making, often taking the specific historicity of these phenomena as his point of departure. Most recently, he has been producing extremely concentrated cinematic installations that develop complex tensions between their subject matter and the associated references and cultural notions. The artist’s interest in different ways of expressing modernity manifests itself in the special, often highly diverse subjects in his work, ranging from post-punk music to a rain forest in Papua New Guinea, and in the aestheticism and extreme reduction of their formal idiom. Though always new and in many cases created jointly with professional collaborators, they often give the impression of found material, seeming to draw on the visual language of the collective imagination of the past and the present.

Poledna’s approach is characterized by a concise handling of cultural references and historical connections combined with elements of repetition, shifting, compression, and omission. Recurring motifs in his film works include the suggestive impact of the projected image, the tension between image and sound, and the complex interplay of popular music and cinematic language. Linking to his interest in the Institutional Critique of the 1960s and 1970s, his precise interventions in the exhibition space often place constituent and auxiliary elements of exhibiting—architecture, design, publication—at the center of his practice.

For his solo show in the Secession’s Hauptraum, Poledna has developed an installation of his film work A Village by the Sea (2011). His spatial concept takes the symmetry of the historical architecture and amplifies it by configuring the structure of the Hauptraum as an apparatus of seeing, comparable with the inside of a camera. In stark contrast to this rigorous arrangement, A Village by the Sea recalls an American musical in the style of the 1930s. For this black-and-white film shot in 35-mm, a set was built on a sound stage in Los Angeles in the style of an apartment of hotel suite interior of this period.

n a series of tracking and static shots with a classic feel, A Village by the Sea presents two characters, a woman and a man, who appear to be connected by an ambivalent, possibly romantic past. The motifs of memory, nostalgia, and lost love that reverberate in the script and in the restrained interaction of the two actors imply a world of extreme artificiality, melancholy, and sentimentality that is only broken for moments by a almost comedy-like ambiguity.

The song performed by the two characters is based on a chanson by French composer and singer Charles Trenet that was specially rewritten and arranged for this purpose as a duet in the style of the American songbook tradition. The character and instrumentation of the original were much altered, extended to an orchestral version with harp, woodwind, and brass. The piece was recorded with a 30-piece ensemble on the scoring stage at Warner Brothers, one of the few surviving recording studios from this period of the film industry. While A Village by the Sea is motivated primarily by Poledna’s interest in the American studio system during the Great Depression, the film also refers to other aspects of popular culture, including the concepts of “New” or “Intelligent” pop in early-1980s Britain, or the reception and appropriation of American film studio productions from this golden age by French film d ́auteurs in the 1960s.