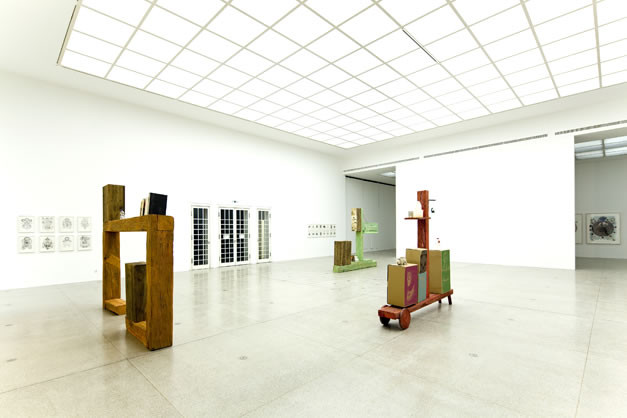 Mutatis Mutandis brings together a number of works that explore the complexity of contemporary events, materiality, history, and memories, and propose possible re-presentations. Discontinuous narratives as well as formal and mental strategies for re-editing information and images question the functioning of visible and invisible structures and networks. They also challenge—through the sometimes paradoxical use of modern and traditional media—the complexities of contemporary subjectivities.

Babak Afrassiabi is working with various formats such as video, objects, and text. He often collaborates with Nasrin Tabatabai; they also produce a bilingual magazine in Farsi and English. Under the name Pages, Afrassiabi and Tabatabai have been realizing joint projects since 2004 which are based on research into the historical conditions of politics and cultural production and their re-articulation through art.

Based on a true story, Thicker than Paint Thinner is a film about Hossein, a former drug addict turned revolutionary who sets fire to the Rex cinema in Abadan (Iran) a few months prior to the 1979 revolution, causing the death of nearly 400 people. The film also makes reference to Seyyed, the protagonist of The Deer (Masoud Kimiai, 1974), the movie that was being screened in the cinema when the incident took place. This movie within the movie is also about a drug addict who gets involved in political activities against the regime; he dies in a gun battle with state police. The structure of the film remains fragmentary, moving between pieces of recollection held together by the character of Hossein and his tape recorder. It is a film about history, martyrdom, truth and the political unconscious of Iranian cinema.


EDGAR ARCENEAUX
Born 1972 in Los Angeles (US), where he lives and works.

He is manager of the Watts House Project, L. A., which focuses on renovating residential properties and providing programs for community involvement in the neighborhood.

"Based on his interest in multiple reference systems, Edgar Arceneaux constructs in his drawings, installations and video and film works a complex network of associations, connotations, and altered levels of meaning to undermine any conventional and linear narration. In an experimental field of comparisons, fractions, and combinations of various perspectives, generally accepted codes are questioned and usual patterns of perception destabilized. Arceneaux explores the limits of our knowledge and seeks possibilities of extending them. He tries to explore the conditions of what it means to be human precisely at the interface of the lasting and the transitory, image and text, abstraction and figuration. His associative approach to such large and inscrutable topics often assumes fantasmatic forms and grotesque combinations. Thus he creates space for the beholder to participate actively in the search for the deeply rooted connections between ancient, universal, and contemporary history."
Nikola Dietrich, press release for the exhibition Hopelessness Freezes Time—1967 Detroit Riots, Detroit Techno and Michael Heizer's Dragged Mass

Edgar Arceneaux about his work at Secession: "The most fruitful way of exploring this installation, Hopelessness Freezes Time is to jump from work to work across the room and parallels and patterns in the various subjects will emerge that describe the totality as well as the intricacies of their historical connections. Drawing connections and expressing affinities between seemingly disparate histories reveals truths of modern reality, as evidence to both our transient present as well as to our primitive past."

With a sculptural practice grounded in the process of casting, Hany Armanious meticulously remakes everyday objects out of unexpected materials. The resulting forms are mostly made of polyurethane resin and capture the wear and tear of the original objects' past lives. By prioritizing process and tactility over aesthetics, he uses casting as a method to reproduce unique items, while the originals are often being destroyed. Arranged in idiosyncratic assemblages, they are meant to encourage prolonged viewing.

"Despite the primacy of the selection and labour-intensive casting process, Armanious' sculptures manage to look as if they pre-exist, the chosen objects having found their way together on their own in some other, metaphysical space. They do this whilst embodying the inherent improbability in what is assembled and the contradictory material truth of what appears to be presented – they remain an approximation of that which they represent. Armanious' practice has an affiliation with traditional concerns of painting, the representation of forms from 'real life' [...]."
Excerpt from the press release for the exhibition The Plagiarist of my Subconscious, May 24 – June 20, 2012, Southard Reid, London

Louidgi Beltrame's work unfolds around a deconstruction of the formal and narrative structures of cinema. He combines documentary, fiction, and architecture, while elaborating on a system of analogies between architectural and cinematographic language. His projects have led him to explore sites of architecture resulting from nuclear disaster (Hiroshima) or from architectural and urban utopias (Brasilia, Chandigarh).

Cinelândia (2012) was filmed in the jungle of Tijuca near Rio de Janeiro, where Oscar Niemeyer built the Casa de Canoas (1951–53) as a home for his family which, however, they abandoned after only a few years of occupancy. The well-preserved glass pavilion is here conceived of as a projection screen for the architect's projects and for fictions of the jungle and its mythologies. The main structure of the film is provided by the voiceover, which reads fragments from Tecnicamente Dolce, an unrealized script by Antonioni from the 1970s.


ELISABETTA BENASSI
Born 1966 in Rome (IT), where she lives and works.

Memorie di un Cieco (Memories of a Blind Man) is based on a modified microfilm reading machine standing on a 1960s Olivetti office table from the ARCO series, designed by the BBPR studio. The surrounding space is painted gray and seems to have been recently emptied out; it looks as though everything around the machine had suddenly vanished. We, i.e. the spectators, and the film provide the only elements of color.

"All I Remember (2010) takes its title from an unpublished novel by Gertrude Stein, mentioned on the back of a photographic portrait of the writer. It tells the story of the twentieth century through notes, stamps, and signs on the reverse side of archival images taken from the archives of newspapers or agencies—which have been carefully copied by hand by the artist in collaboration with a banknote designer.""All I Remember", interview by Cloe Piccoli, in All I Remember, exh. cat. Magazzino d'Arte Moderna, Rome, May 11–July 31, 2010.

Andrea Branzi is one of the most important avant-garde artists in the field of industrial and experimental design and in Italy's radical architecture movement. In 1964 he co-founded Archizoom Associati and in the 1980s he was associated with Studio Alchymia and the Memphis group. His work also relates to architecture, urban planning, and theory.

Grandi Legni (2009) is a group of assemblages which continue Branzi's exploration into the environmental archetypes that characterize the complexity of the contemporary world. His works, which are halfway between architectural installations and everyday objects, deal primarily with historical iconography, technology, and the meeting of modern and ancient.

Luke Fowler's installations explore the historical complexities of location, sound, and film, questioning if it is possible to create a meaningful dialogue between looking and listening; in his work he often explores the limits of documentary filmmaking, combining new and archival footage, interviews and photography, yet paying close attention to sound and its social significance.

All Divided Selves concentrates on archival representations of the famous psychiatrist R. D Laing and his colleagues as they struggle for social environment and disturbed interaction in institutions to be acknowledged as significant factors in the etiology of human distress and suffering.


SUZANNE TREISTER
Born 1958 in London (GB), where she lives and works.

"She was a pioneering digital artist, always interested in the science-fictional possibilities of computers and computing, and in 1995, she developed an avatar called Rosalind Brodsky [...]. Paranoid structures are notoriously difficult to disentangle from rational forms of interpretation, as both Freud and Lacan commented in their psychoanalytic studies. In the era of the internet, Treister's combination of interests in the history of technology, the military-industrial complex, and magical thinking about occult inter-connectedness makes her work an important reflection on our weird and wired condition of being."
Introduction to "What Happens in the Gaps: An Interview with Suzanne Treister" by Roger Luckhurst, 2009
http://ensemble.va.com.au/Treister/info/Interviews/Treister_Luckhurst.html

... the Alchemy series:
A series of works which transcribe front pages of international daily newspapers into alchemical drawings, reframing the world as a place animated by strange forces, powers and belief systems. These works redeploy the languages and intentions of alchemy: the transmutation of materials and essences and the revealed understanding of the world as a text, as a realm of powers and correspondences which, if properly understood, will allow man to take on transformative power.

... HEXEN 2.0:
HEXEN 2.0 looks into histories of scientific research behind government programmes of mass control, investigating parallel histories of countercultural and grass roots movements. HEXEN 2.0 charts, within a framework of post-WWII U.S. governmental and military imperatives, the coming together of scientific and social sciences through the development of cybernetics, the history of the internet, the rise of Web 2.0 and increased intelligence gathering, and implications for the future of new systems of societal manipulation towards a control society.

HEXEN 2.0 specifically investigates the participants of the seminal Macy Conferences (1946-1953), whose primary goal was to set the foundations for a general science of the workings of the human mind. The project simultaneously looks at diverse philosophical, literary and political responses to advances in technology including the claims of Anarcho-Primitivism and Post Leftism, Theodore Kaczynski/The Unabomber, Technogaianism and Transhumanism, and traces precursory ideas such as those of Thoreau, Warren, Heidegger and Adorno in relation to visions of utopic and dystopic futures from science-fiction literature and film.

Based on actual events, people, histories and scientific projections of the future, and consisting of alchemical diagrams, a Tarot deck, photo-text works, pencil drawings, a video and a website, HEXEN 2.0 offers a space where one may use the works as a tool to envision possible alternative futures.

HEXEN 2.0 is the sequel to HEXEN 2039 which imagined new technologies for psychological warfare through investigating links between the occult and the military in relation to histories of witchcraft, the US film industry, British Intelligence agencies, Soviet brainwashing and behaviour control experiments of the U.S. Army.

... HEXEN 2039/REMOTE VIEWING DRAWINGS:
A series of HEXEN 2039 remote viewing drawings were made using Dr John Dee's scrying crystal at the Science Museum, London. The alchemist John Dee was 'Queen's Intelligencier' to Elizabeth I and a close associate of Sir Francis Walsingham, founder of the British Secret Service. The crystal was originally used by Dee in the 16th Century to foretell and provide political and military intelligence.

CATHERINE DAVID
From 1994 to 1997 Catherine David was arts director of Documenta X in Kassel, and from 2002 to 2004 director of Witte de With Centre for Contemporary Art in Rotterdam. After studying linguistics and art history, she worked as a curator at the Centre Pompidou (1981–1990), before moving to the Jeu de Paume (1990–94), both in Paris. Since 1998 she has been head of the Représentations Arabes Contemporaines project, which takes the form of exhibitions, seminars and publications in various European cities. In 2005–06 Catherine David was guest researcher at the prestigious Wissenschaftskolleg in Berlin, where she continued her work on the Arab world. In 2007 she organised the interdisciplinary event Di/Visions: Culture and Politics of the Middle East at the House of World Cultures in Berlin and Bahman Jalali retrospective at Tapiès Fondation in Barcelona. In 2009 David was curator of ADACH (Abu Dhabi Authority for Culture and Heritage) pavilion at the Venice Biennal. Her last publication is Hassan Sharif. Works 1973-2011 (Hatje Cantz).
www.secession.at