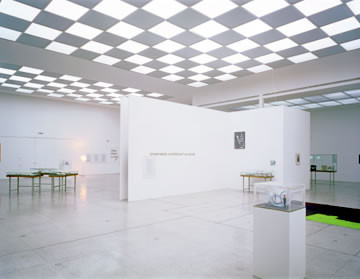 The exhibition Shandyismus. Autorschaft als Genre refers to Laurence Sterne’s novel The Life and Opinions of Tristram Shandy, Gentleman from the 18th century. It will focus on Shandyism as a phenomenon or position, reflecting the diversity of points of contact with the media. A number of existing art works will be shown that express the methodological idiom of Shandyism. At the same time, artists have been invited to develop a “Shandyesque intervention” for the exhibition.

„Shall we for ever make new books, as apothecaries make new mixtures, by pouring only out of one vessel into another?” Laurence Sterne, 1760

In Laurence Sterne's 18th century novel The Life and Opinions of Tristram Shandy, Gentleman, there are black and marbled pages, missing chapters, free space for the reader to include their own versions of events, any number of inserted diagrams that either serve to clarify the performative aspect of the narrative or to illustrate the novel's extremely complex narrative structure. Individual letters are emphasised typographically so that they can no longer be articulated. The narrative thread develops from a great many deviations, and ends before the novel began. The reader is frequently addressed, either as a man or as a woman. Tristram Shandy, the dramatised narrator, is presented less as the protagonist in the story than as the author of the novel that one is reading.

The book as a medium has hardly ever been addressed with more self-reflective humour and irony, culminating in the question why so many books are written. In a sense, just this one could have been sufficient. At the same time, this approach goes beyond a domestic tradition of Modernism beyond all traditions of genre and lines of intellectual approach. Elements of Shandyism can be found in all artistic disciplines, but there are also traces of it in philosophy and politics. Its influence on art in particular has hardly been studied to date.

The exhibition Shandyismus, Autorschaft als Genre attempts to focus on Shandyism as a phenomenon/position, taking into account the historical dimensions and a new contemporary strategy to be rediscovered here. Aspects of a thematic exhibition will thus be related to a contemporary group show. Here, a number of works will be shown in which the methodological idiom of Shandyism is expressed primarily as a construction of authorship and readership. These exhibits will be accompanied by several thematic blocks focusing on narration and diagrams of a more historical nature to be presented in glass show cases, addressing the media and the interface with art, literature, film, comics, philosophy and record covers. At the same time, a number of artists will be invited to “intervene Shandyesquely”, i.e. to conduct themselves in a particular manner towards the exhibition. Even the design of the exhibition is based on Shandyesque elements, referring to earlier exhibitions in the Secession, such as Joseph Kosuth’s 1989 Wittgenstein exhibition and more recent exhibitions, e.g., Michael Krebber, Christopher Williams and Constanze Ruhm’s Fate of Alien Modes.

Helmut Draxler, born in 1956, is professor for art theory at the Merz-Akademie in Stuttgart, author and curator, lives and works in Berlin.
www.secession.at