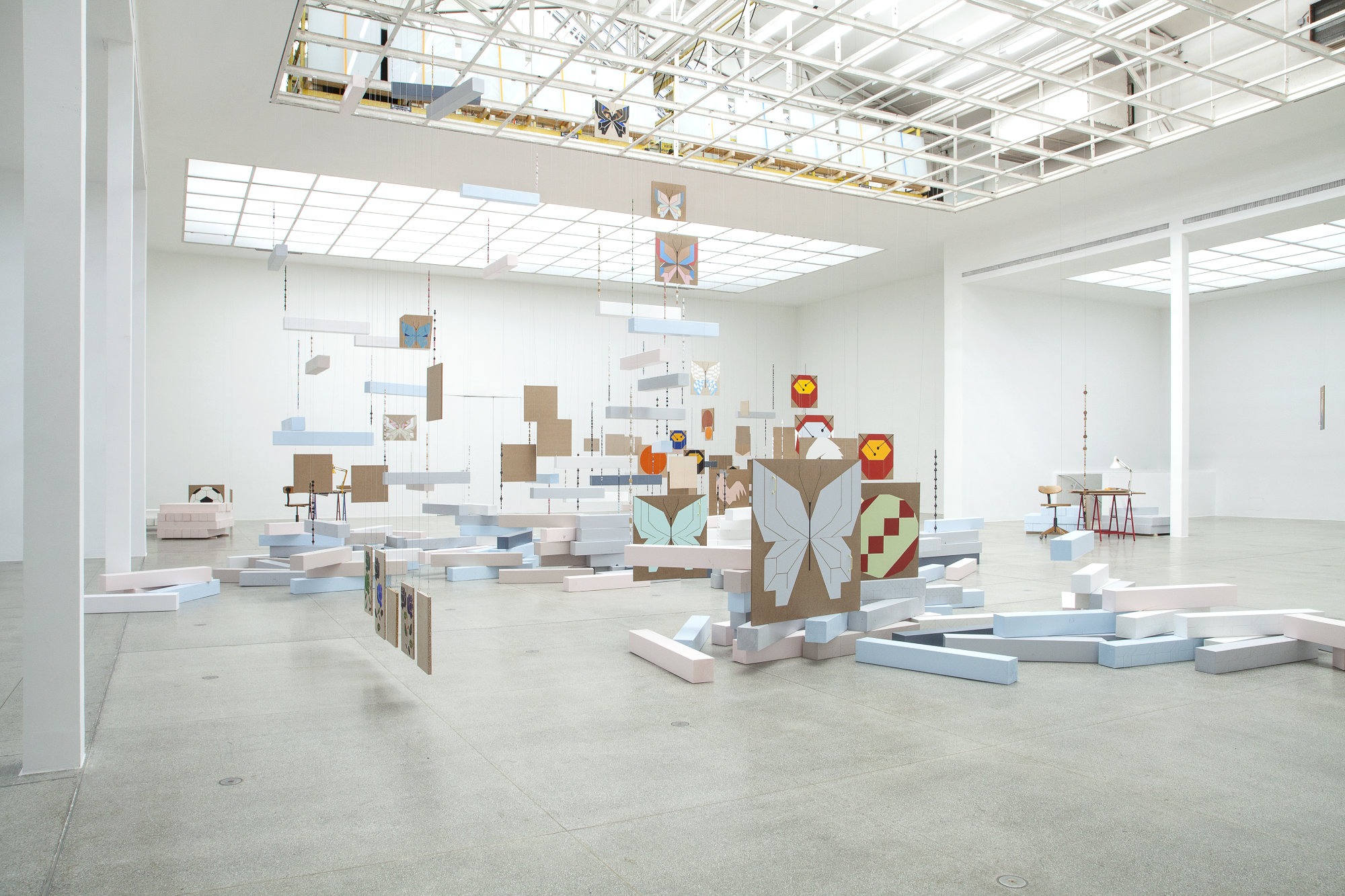 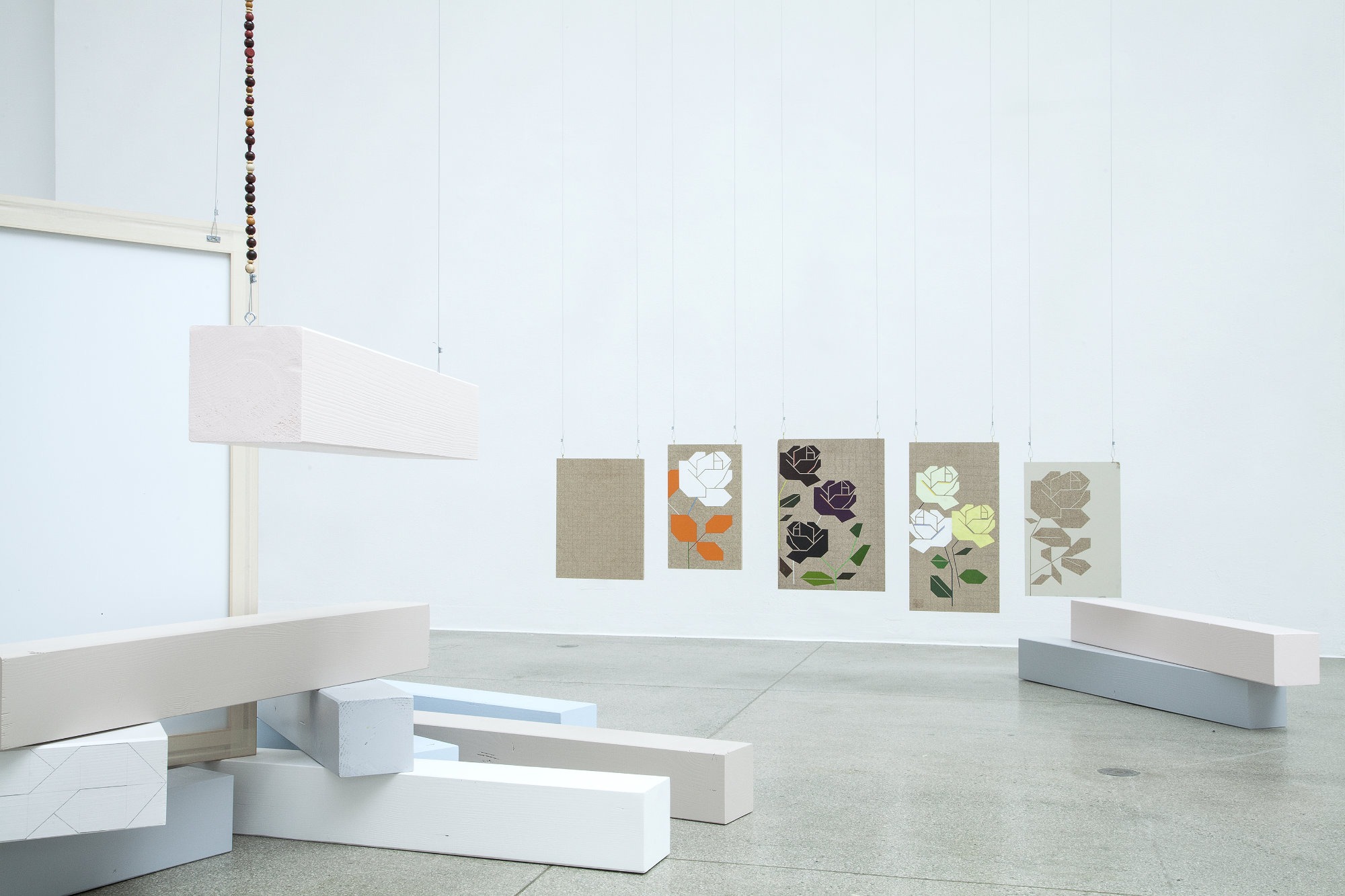 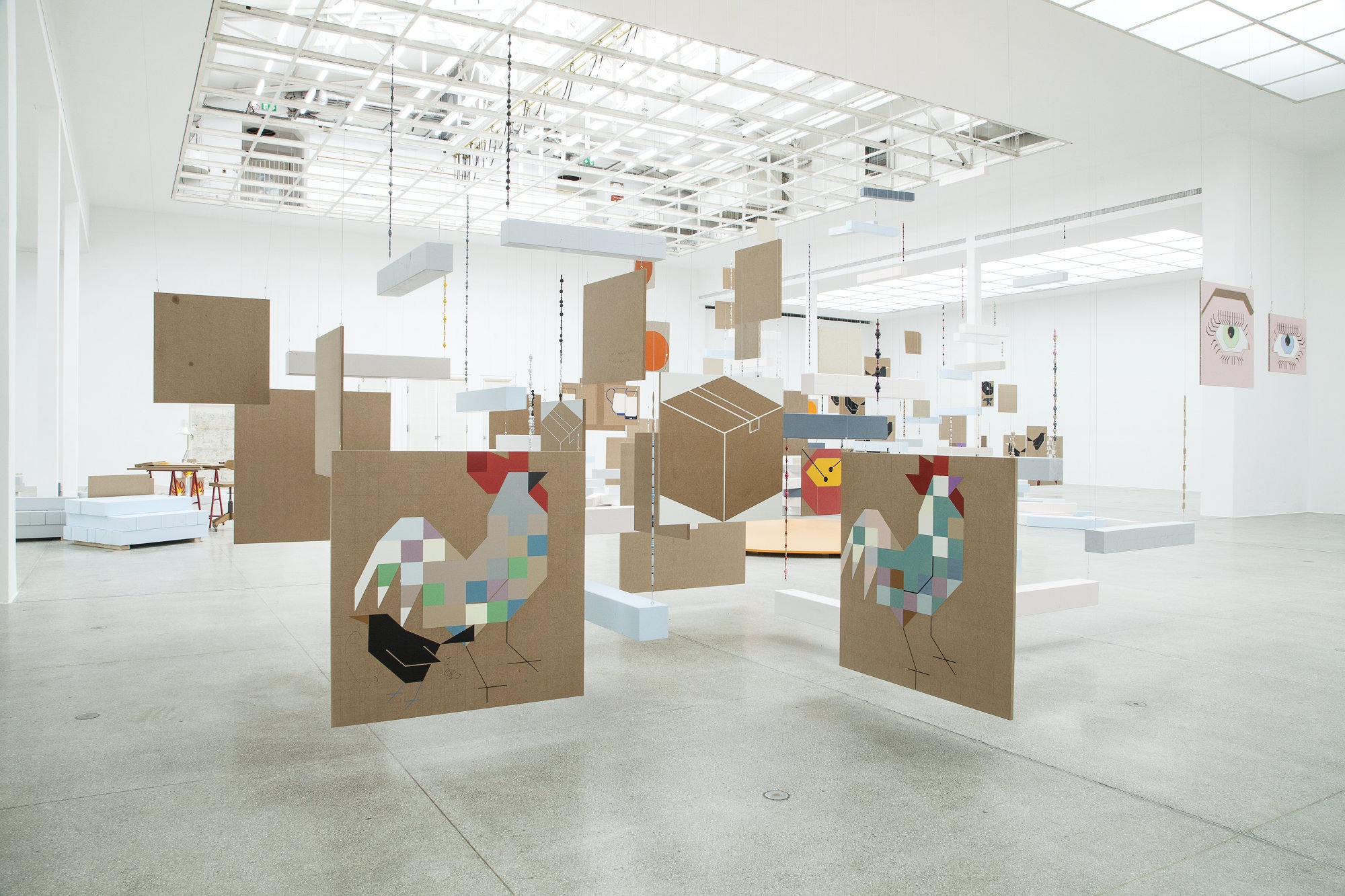 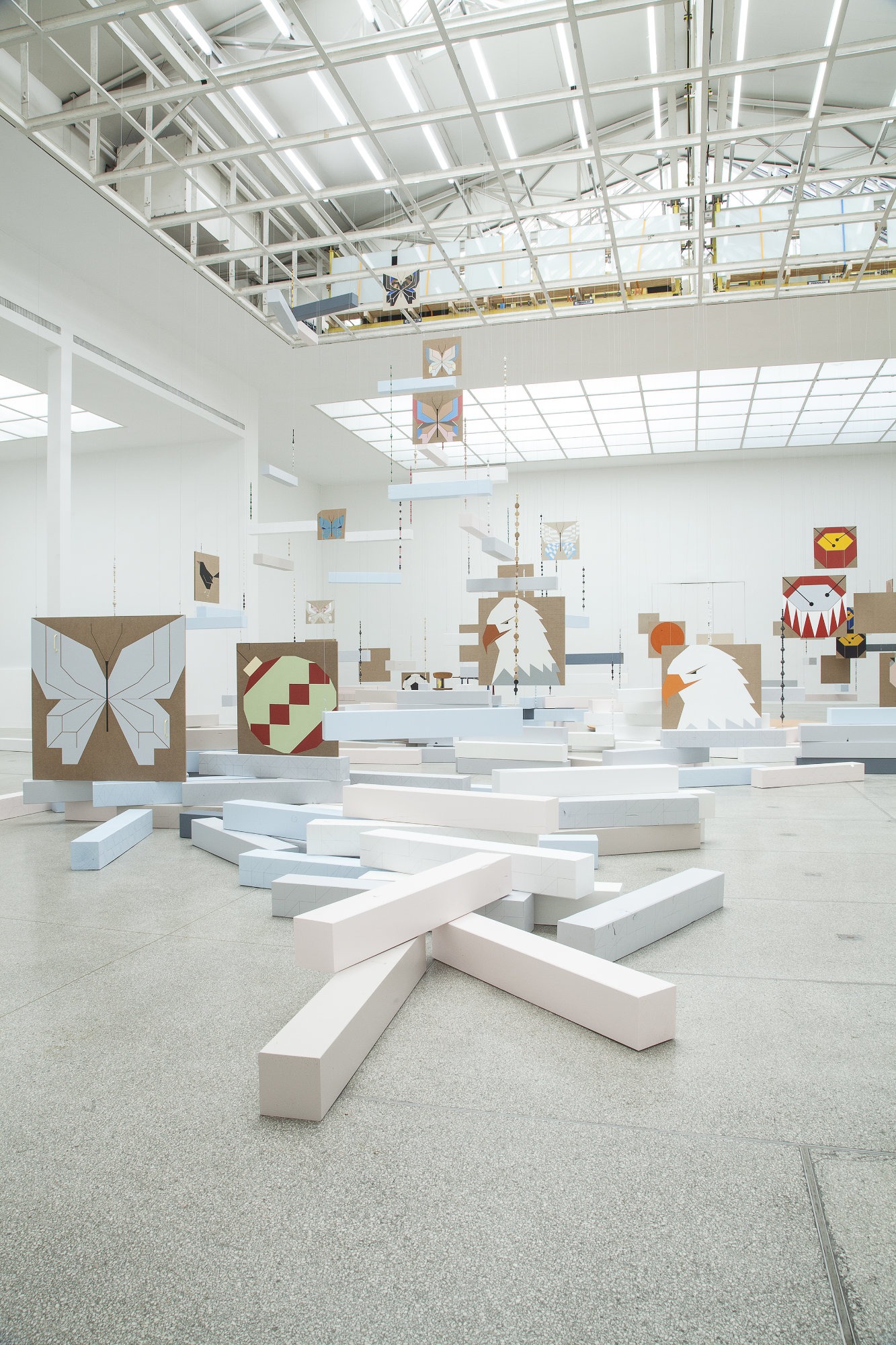 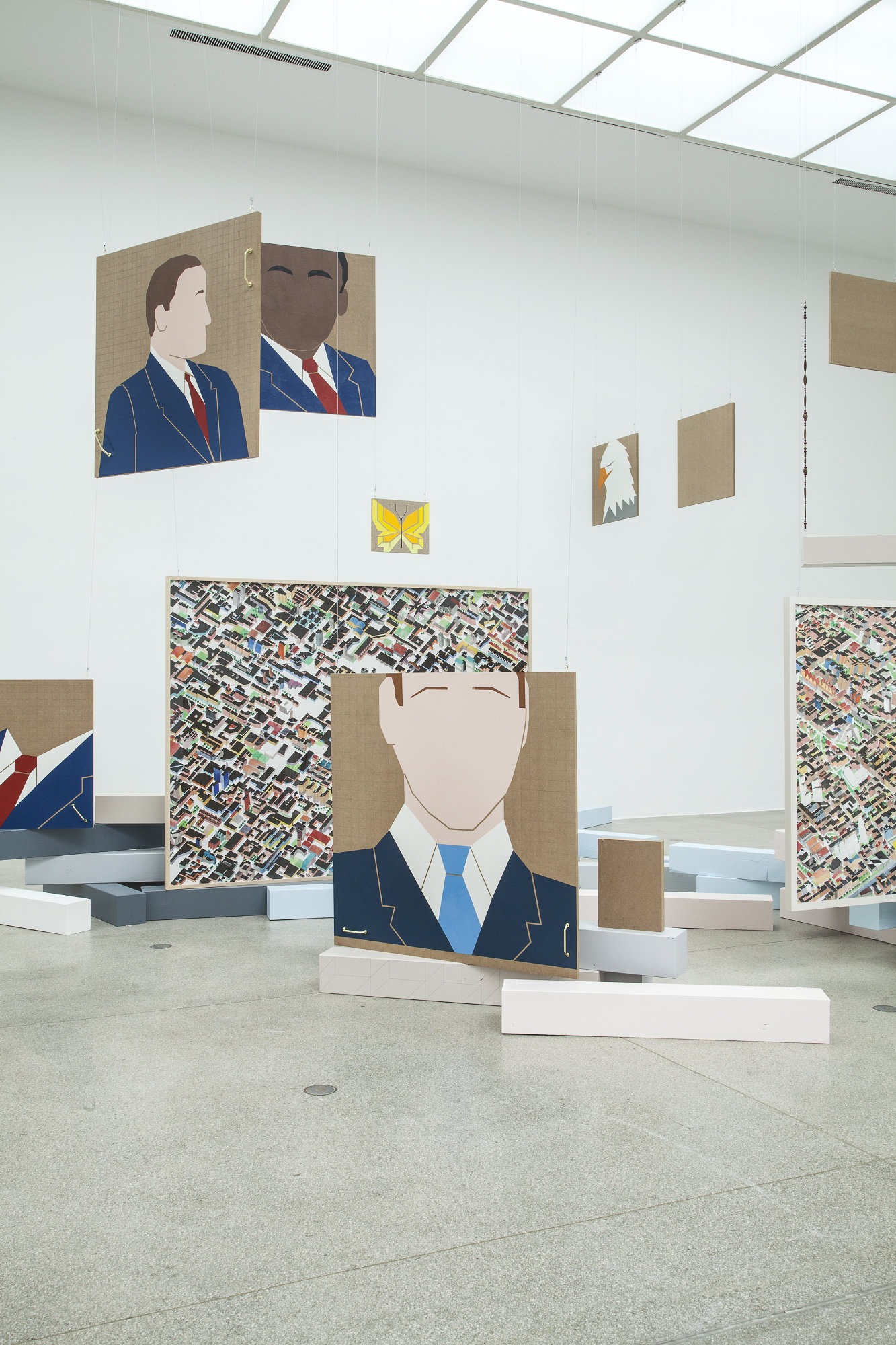 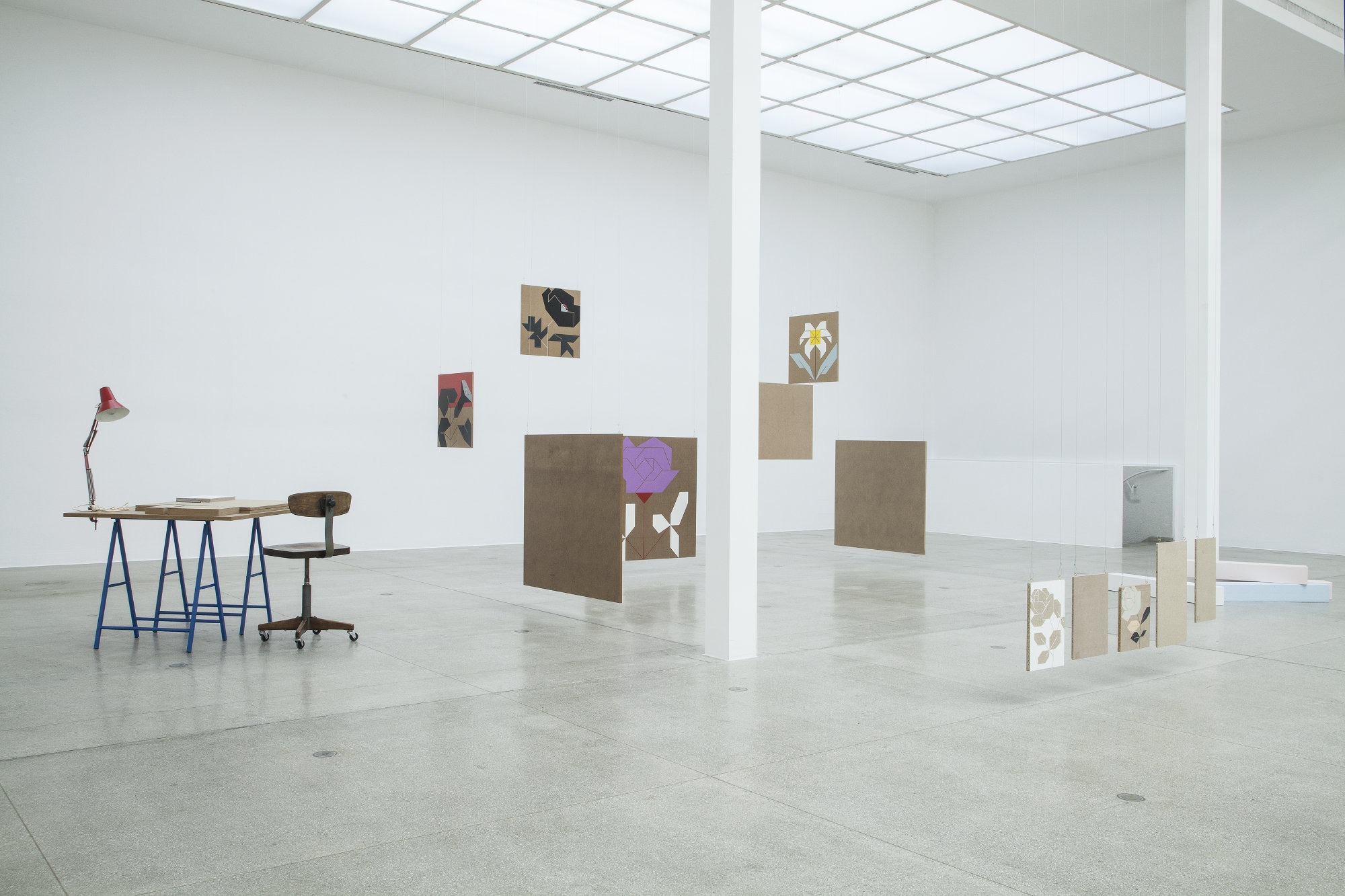 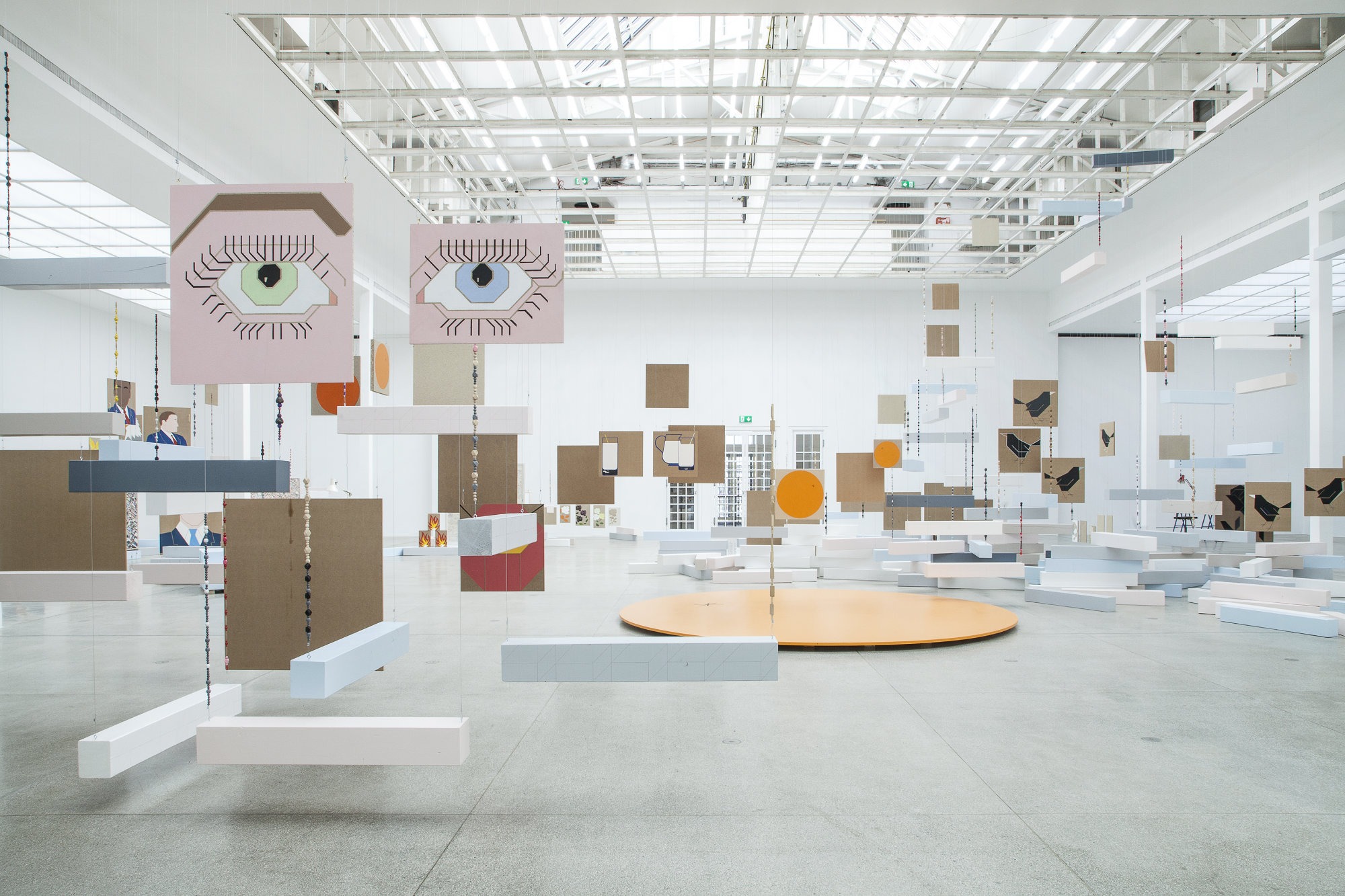 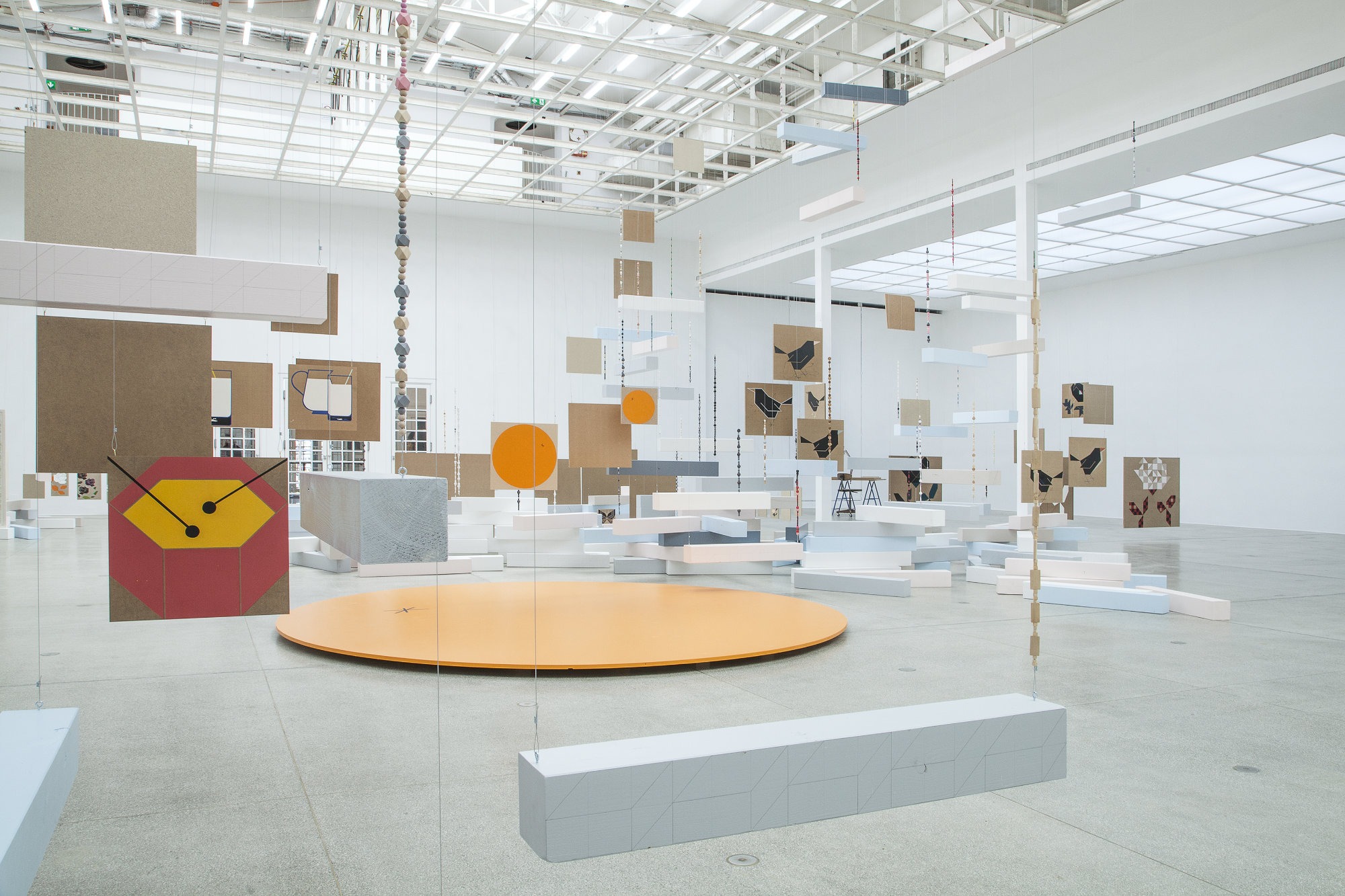 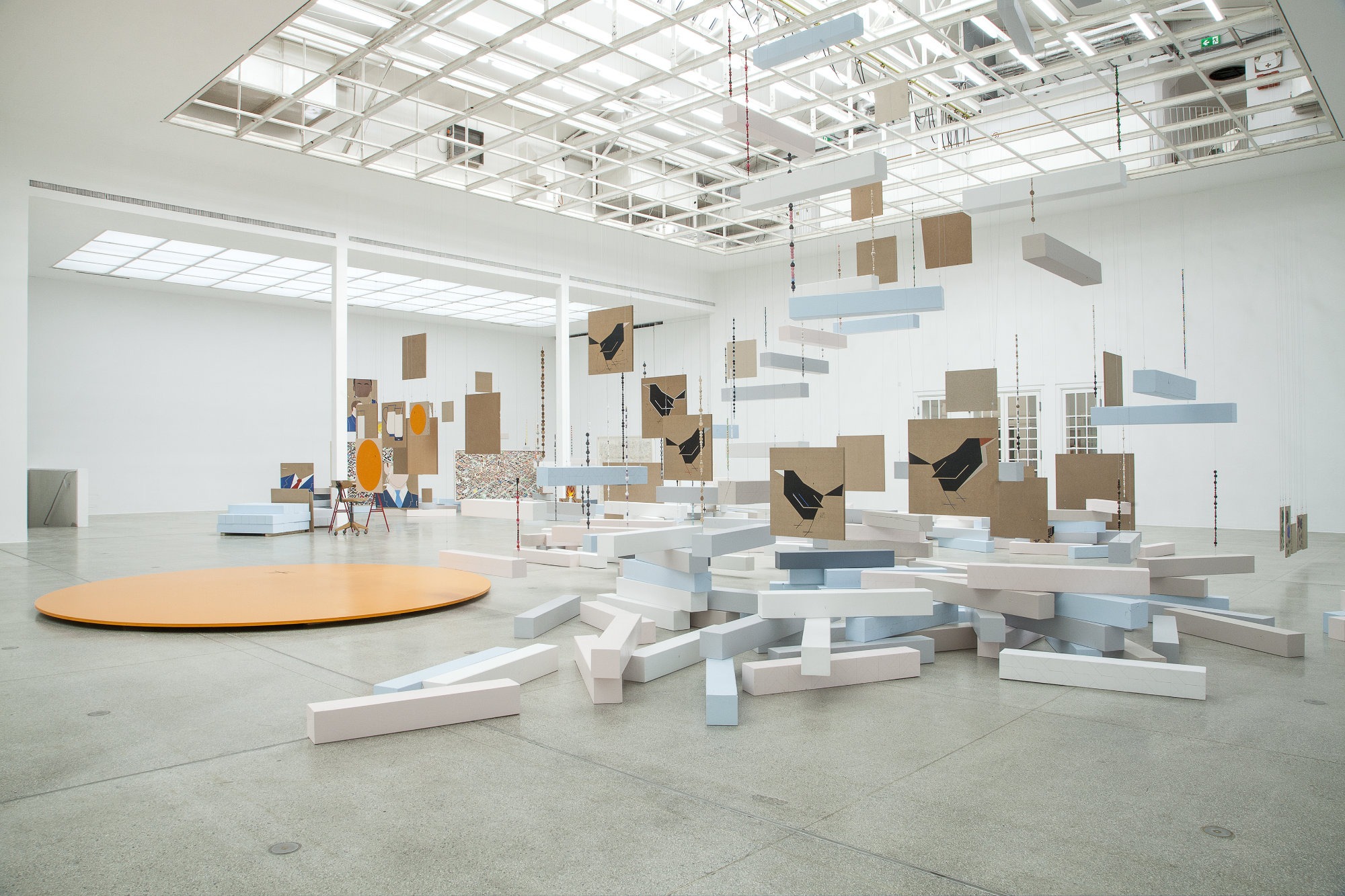 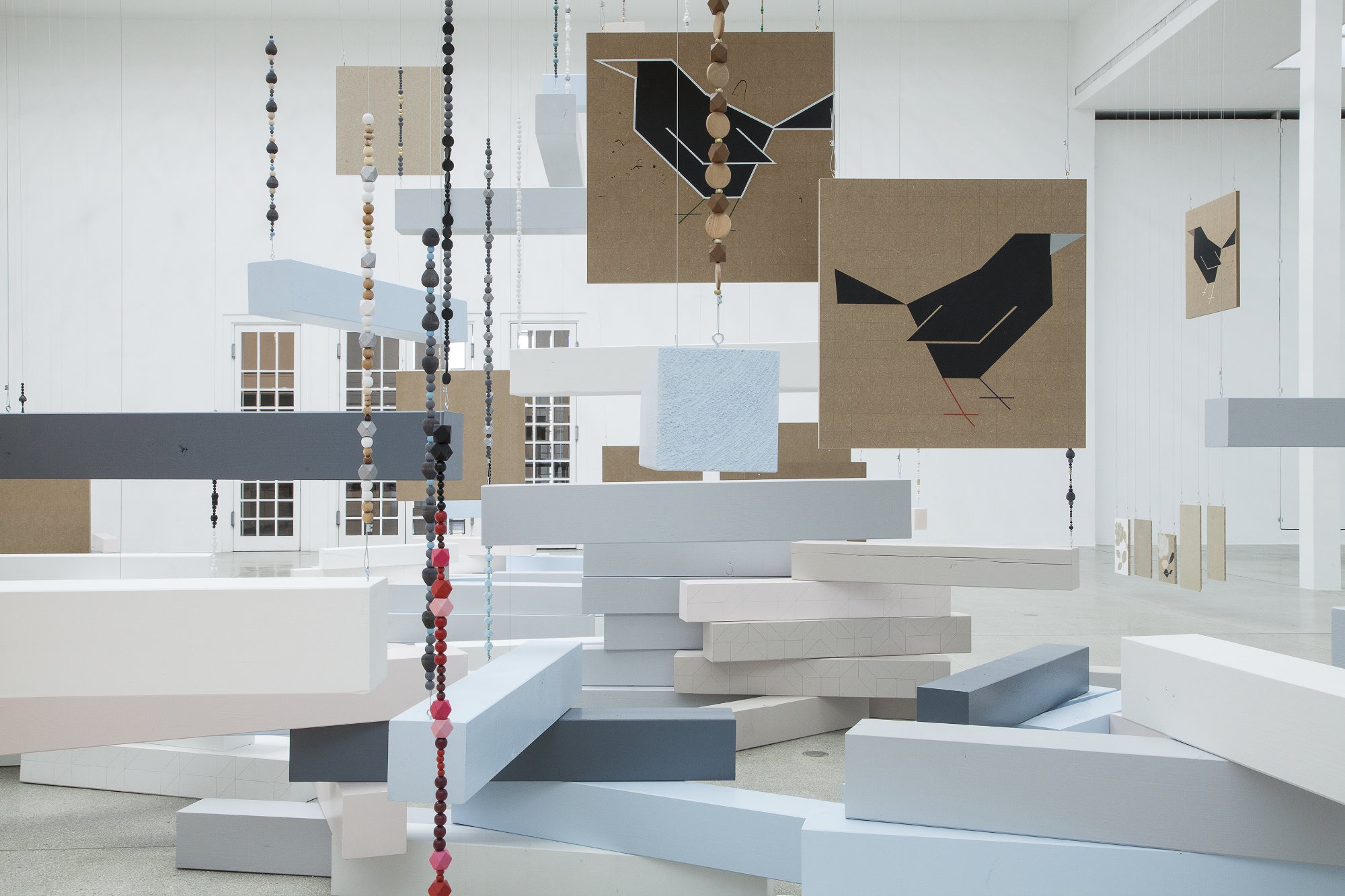 Siggi Hofer, Still Life, installation view, Secession Wien 2022, photo: Michael Strasser
In Still Life, Siggi Hofer has conceived an immersive installation in dialogue with the Secession’s characteristic architecture: we enter a large tableau composed of numerous and diverse works that in many ways reflects the baffling complexity of our contemporary reality. Having come to look and moving about the room, we find ourselves cast as actors and co-creators of the exhibition; we need to get our bearings, make sense of the arrangement, tease out interconnections and meanings. Still Life builds directly on the earlier exhibition gift basket, in which the titular object served Hofer as a metaphor for his reflections on relationships, family, identity, and recollection. In the still life genre, the artist once again chooses a universally familiar trope. Even more than the gift basket, which complements the handsome gesture with a handsome presentation shaped in part by pragmatic considerations, the still life is defined above all by aesthetic questions of composition and color: Which objects make interesting neighbors, what fits with what, and what happens in these various constellations, what happens when one changes them?

Hofer’s versatility is evident in the diverse media, details, small gestures, and subtle creative choices in the exhibition, which gathers works from different periods in his oeuvre, as well as an installation outside the Secession and an artist’s book in the form of a newspaper (the “Deutsch-Gotisch” typeface is a nod to the daily “Dolomiten,” which the artist grew up reading) with contributions by Hofer himself. The literary writings he produces as he works on his exhibitions bring into focus the significance of autobiographical reflection—searching meditations on memory, childhood, identity, and emancipation—in his art. Alternating between sober-minded analysis and humor, the texts are unsparingly candid while leaving room for doubt. Playful self-reference and quotes that link the presentation to earlier works are recurring motifs throughout the exhibition.

Together with the new pictures, altogether four hundred wooden beams painted in pastel shades constitute the presentation’s core. No component touches the building’s shell, the walls—everything is suspended from the ceiling or rests on the floor. Not for the first time, the artist toys with conventions of exhibition-making and the ways in which art is staged and showcased. Every hook, every grommet was chosen with care and is part of the installation. Echoing the style of graphic design and executed in grid patterns, the pictures in loud colors show animal and plant motifs and mundane objects. Visual axes shift, adjacencies are reshuffled with each step we take inside the installation; new visual compositions emerge suggesting new readings and contexts of meaning. The motifs are drawn from various sources: self-quotes are interspersed between visuals inspired by the works of other artists. Some, like the men’s suit, the soccer ball, the eagle, may be read as gesturing toward patriarchal and nationalist stereotypes; others, meanwhile—the butterfly, the rose, but also the soft hues chosen for the exhibition display—hint at an alternative vision. The artist does not tell us what to make of all this. A line from the writer and artist Herbert Achternbusch—“Kunst kommt von kontern,” roughly: “It’s called art because it’s a retort”—underscores Hofer’s recalcitrant attitude.

Illustration templates on graph paper are a peculiar format some visitors may remember from childhood: patterned trims and decorative moldings as well as depictions of animals and other popular subjects that can be easily reproduced even by untrained young artists thanks to the grid overlaid on them. For Hofer, working with grids is also a strategy of deliberate unlearning that shifts attention away from displays of artistic bravura and toward the content. Meanwhile, some of the one-meter construction timber beams painted in cheerful colors are enhanced by decorative pencil designs, and compositions made of wooden beads embellish the steel suspension cables: further instances of strategic crossover between high and low and the artist’s resolve to confront the media and materials of art with those of the technical trades, do-it-yourself practices, and the hobby-art industry. By reiterating, superimposing, camouflaging, and recombining motifs, he weaves a dense web of references that deftly challenges the reduction of what is seen to straightforward meanings (or solutions). The installation of three workplaces that will be in active use from time to time—new works will be completed and added to the presentation—adds a performative dimension to the show.

The built environment, and especially the city as a complex social fabric and embodiment of utopian visions, a scene of grand hopes and safe haven, a place that beckons with diversity and freedom, is a motif that appears in the artist’s work early on. Even as a child he was drawing himself out of the mountains around his hometown in the Alps and into the big city—as an early drawing by the future artist on view in the exhibition demonstrates. It is shown side by side with later depictions of fictional cities, created, one might say, in a dialogue between the grown-up artist and his much younger self.

One picture that appears only on the invitation card and the cover of the artist’s book is a kind of secret key to the show: an illustration from a children’s encyclopedia that has Hofer spellbound even after decades. It is an apocalyptic scene, an illustration of the aftermath of an earthquake, with burning buildings and cars being swallowed up by the earth. The picture spells out what is actually the keynote of the exhibition, although the latter’s show of playfulness might suggest otherwise: “Disaster strikes somewhere else”—but strike it does.

Programmed by the board of the Secession
Curated by Bettina Spörr
www.secession.at