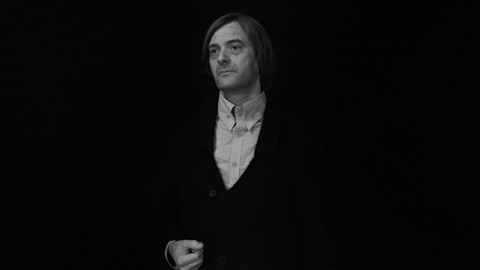 There is something subtly mysterious about the films and photographs of the Danish artist Ulrik Heltoft. Drawing on literary narratives or scientific sources, his works often explore the conceptual and aesthetic potentials of specific technologies. Despite his experimental use of his media, his photography evinces a uniform clear and brilliant quality.

In his show at the Secession, Heltoft presents his new film Kabinet, which combines animated sections with live-action sequences to stage the protagonist's triple encounter with his own spirit in the past, present, and future—in other words, with himself as a young man, his present self, and what the future may bring. The film is based on a piece of social critique that has been adapted for the screen many times: Charles Dickens's novella A Christmas Carol (1843), in which the confrontation with the ghost inspires the old and stingy businessman Ebenezer Scrooge to open his heart and change his ways. Kabinet was produced in the high-resolution format 4K, whose crystal-clear the depiction of details creates an almost uncanny realism. As in earlier works, Heltoft uses technology to build ambiguities and construct moments that hover between reality and dream, between phantasms and disillusionment. "The reality of dreams is what interests me," as Heltoft puts it.

Ulrik Heltoft, born in 1973, lives and works in Copenhagen.

The exhibition is accompanied by an artist book with a text by François Piron.
Invited by the board of the Secession
www.secession.at