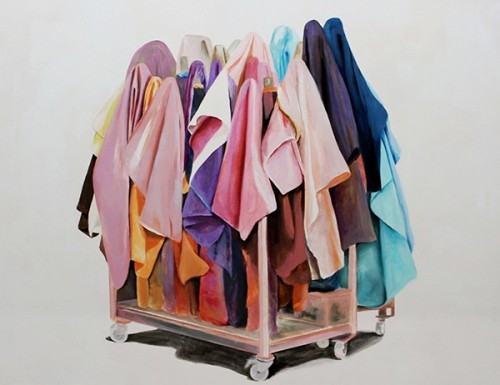 We are pleased to open our new gallery space in Blumenthalstrasse 8 in Berlin Schöneberg with Kerstin Drechsel’s fourth solo show at SEPTEMBER, I Love Feminism. At the same time, we’re opening our new showroom SEPTEMBER/CONTAINER at the same location, where we will be showing current and applied arts, furniture, ceramics, textiles, jewelry, and objets trouvés.
The opening presentation consists of works by Bettina Allamoda, Ursula Döbereiner, Kerstin Drechsel, Larissa Fassler, Carsten Fock, Henry Kleine, Les Paruriers, Stefan Thiel, Nikolaus Utermöhlen, and Elmar Vestner.
With I Love Feminism, Kerstin Drechsel continues the painterly investigation into feminist and “queer” themes that was also central to her last project, Wärmespeichersysteme (2012). Point of departure for the current exhibition is a recent survey on the public image of feminism among British teenagers. When the students were asked how they imagined feminists to be, the associations were almost always: big, fat, lesbian, and hairy.
Drechsel took these clichés as an occasion to create an image archive, a personal atlas that is about images and representations of feminism and femininity, classifications and norms, standards of beauty. Nearly four decades after the emergence of the women’s movement, the journey leads us into a homogenized culture that might seem liberated, but hardly allows for any differentiation or gray areas regarding female role models.
Drechsel’s watercolor series I Love FEMINISM features the nostalgically charged stickers and banners of the 1980s as well as the masks and clothing styles of the post-feminist protest culture of globalization’s opponents. Drechsel also portrays types of women from a wide variety of cultural and ethnic backgrounds, of all ages and walks of life. In these subjective portraits,
painterly gestures, transparency, density, and gradation of color convey particular feelings or political stances—severity, grief, refusal, humor, disdain, vulnerability. Drechsel samples and varies her motifs, approaches them using various contrasts and gradations, emphasizes or retouches individual details, and works with dried marks and water edges. Her works are always about painting itself: the process of painting, painterly decisions, the construction of the image.
In this sense, Drechsel’s painting investigates both social and formal orders. She continually juxtaposes the rituals, gestures, and fashions of the women’s movement with views or close-ups of so-called “messie apartments”—rooms in which autonomous styles of organization, often looked down upon socially, have asserted themselves. Drechsel’s paintings, however, show these living spaces from a completely different perspective: as accumulated structures that not only speak of “disorder,” but also, in their compulsivity and beauty, embody a kind of resistance.
www.september-berlin.com