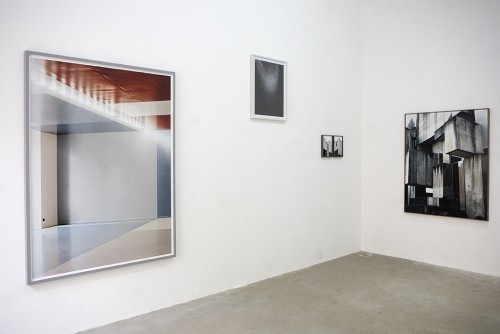 At SEPTEMBER, we are pleased to present the show WELTAUSTELLUNG with the Berlin artists Stephanie Kloss and Heidi Specker.
Over the past several years, both Kloss and Specker have taken photographs in the EUR (Esposizione Universale di Roma). The modern district in the south of Rome, built in a Fascist style, was planned in the late 1930s by Benito Mussolini as an arena for the 1942 World’s Fair in Rome. After World War Two broke out, however, the fair never took place. The district’s appearance is characterized by the reduced architecture of Razionalismo and by the use of building materials considered revolutionary at the time, such as reinforced concrete, steel, and glass. The style also bears neo-classical influences, with elements from ancient Roman architecture and Pittura metafisica—an Italian painting movement that formed around 1910, the main figure of which was Giorgio de Chirico.
The construction of worlds—whether megalomaniac, futuristic, utopian, intimate, or fragile—has occupied Kloss and Specker during their photographic excursions through a still unfinished history of modernism.
Even though the exhibition only includes a single photograph that Kloss took in EUR, the “Weltausstellung” or World’s Fair constitutes the associative motif of the exhibition at SEPTEMBER.
Theo van Doesburg also stands for the pioneering spirit of the modernist avant-garde. In 1928, together with Hans Jean Arp and Sophie Taeuber-Arp, he created the interior design for the Aubette leisure center in Strasbourg, whose foyer Stephanie Kloss photographed in 2013. This gesamtkunstwerk dedicated to making life more beautiful epitomized van Doesburg’s call to put people in the painting, instead of in front of it.
Kloss turns this around: she places people before the architecture, as with painting. She confronts the viewer with crops or set pieces of buildings or rooms oddly lacking in dimension, while scale and proportion dissolve into reduced, geometric, colorful compositions. In WELTAUSTELLUNG, she brings together a variety of very different motifs ranging from modernist architecture to brutal cement structures like the Wotruba Church in Vienna, built in 1976, to buildings of today. Included are the Piazza d’Italia, built after a painting by de Chirico on the occasion of the World’s Fair in New Orleans, or the IBA 87 Complex in Berlin by Oswald M. Unger, which is currently being demolished. The model-like quality and sobriety of Kloss’s images make them seem almost surreal: the empty, weathered, eroded, or restored architecture becomes an abstract skeleton for modernist dreams, utopias, and ideals.
In the work of Heidi Specker, architecture, interieurs, design, and style formulate the “first sentence” in an imaginary story. The artist follows traces that can be both iconic and personal. Buildings, interior decoration, worlds of things provide her with the impulse to reflect on matters both existential and banal.
The great designs and utopias of the 20th century are reflected in fragmentary ways in details: in the intimacy of an interior space, a book laid aside, the door handle to a discothek. Specker asserts that she is not a “flaneur” in the sense Walter Benjamin used the term, but a “passerby.”
Specker’s excursions begin with a certain distance that testifies both to a respect for and an ambivalence towards the subject of the photograph. In her contribution to WELTAUSSTELLUNG, she dedicates herself to the universe of a modern visionary—the Italian architect, designer, and dandy Carlo Mollino (1905-1973). With his futuristic designs for furniture, houses, racing cars, and his novels and other writings, Molino, a pioneering figure for the 20th-century avant-garde, worked in a wide variety of mediums. He was a master of the accoutrement and backdrop. He lovingly staged every detail in his apartment in Turin, from the leopard-skin-patterned wallpaper to the glass frames containing rare butterflies. The apartment became a stage for the Polaroids he made of acquaintances and prostitutes, whom he dressed up in his fashion designs. Today, the location is a private museum.
For her series “Überflüssige Abenteuer” (Superfluous Adventures), Specker takes two of Molino’s novel manuscripts as her point of departure, works written between 1930 and 1940 that remain unavailable to this day: SALDATORE DI TORINO and INUTILE AVVENTURA. Specker designed the unpublished books as an homage to Mollino. In the two book editions, Mollino’s unpublished designs for clothing and gloves are combined with Specker’s photographic essays: series from the Egyptian Museum in Turin, which was a place of longing for Mollino, and the interior of the dance hall “Le Roi,” which he designed and furnished in its entirety. Specker photographed her imaginary Mollino volumes in the style of the 1940s, in the place they were written: his apartment in Turin. For Specker, this temple of taste is also a funerary chamber she adds her own images to.
www.september-berlin.com