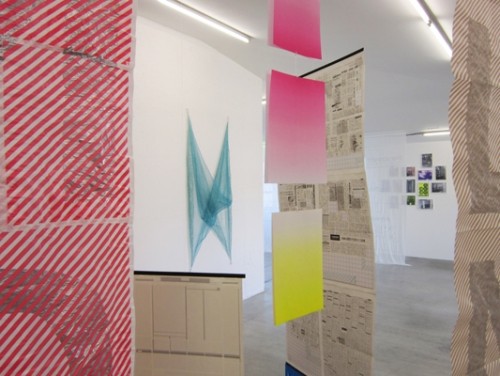 We are very pleased to announce the group exhibition Tender Buttons, which was conceived for SEPTEMBER by Ursula Döbereiner, Henry Kleine, and Oliver Koerner von Gustorf. The participating artists are Bettina Allamoda, Marc Brandenburg, Ursula Döbereiner, Henry Kleine, Kottishop, Karin Michalski, Thomas Rehnert, and Taocheng Wang.
The title of the exhibition refers to a book of the same name by Gertrude Stein, which was first published in 1914. The title is enigmatic, with various connotations. In her book, Stein devotes herself to three areas of daily life: “Objects,” “Food,” and “Rooms.” She uses language experimentally in the work, as material, similar to shape and color in abstract painting.
At the same time, the exhibition title refers to all of the delicate receptors via which we communicate with others, or via which artists communicate with their material. “Tender Buttons” is an exhibition about the possibility and impossibility of intimacy – with friends, strangers, other cultures, and thesociety in which we live and work. Additionally, it deals with the relationship between viewer and work, between the public and the art world. In a formal, sensory, discursive way, how do art and the artist become intimate with the viewer? How do they create distance? Where do they include people, and exclude them?
With her collages and pop-up collages, Bettina Alla Bettina Allamoda Bettina Allamoda takes the work on her project moda NO GO – THE EXORCIST REVISTED further. Allamoda transfers the notion of a “fabric of society”, with which networks, connections, family relationships, friendships, and society are intertwined, to the materiality of her works. The trauma of the war in Iraq and fear of outbreaks of violence and psychoses in familial and societal spheres are set against control and security mechanisms that are used in girl’s rooms and stadiums, on streets and battlefields: upholstery, protection, camouflage, and isolation.
Marc Brandenburg’s video film Marc Brandenburg’s “Friends”: 19 seconds about a beautiful, honest, sincere friendship...but no!

The motifs that Ursula Döbereiner Ursula Döbereiner Ursula Döbereiner mixed and sewed on a sewing machine for her fragile curtain stem from her “View-Fanzine”, which addresses our view of a burqa and the view of the burqa wearer, with all the implications: questions of identity, the public and private sphere, emancipation, reality, and projection. Döbereiner uses visual material she found on the Internet under various headings relating to burqa and subjects it to two contrary principles: veiling/anonymizing and capitalism’s compulsion to expose. She plays the two ideologically charged views off against each other and lets them switch roles. The exposed veils itself, the veiled exposes itself. The motifs she chooses for her veil curtain have very different origins, ranging from Internet forums in which burqa wearers present the interior of their apartments, to ads for projectors from the early 1970s.
Henry Kleine is showing a new series of paintings d Henry Kleine evoted to feelings of frustration, consumption, unfulfilled longings, and cryptic promises.
Kotti----Shop is a multifaceted project space in Berlin Kreuzberg which since December 2008 has offered a wide-ranging art program for friends, neighbors, and artists. Kotti-Shop houses and organizes workshops, participative projects, exhibitions, and other projects, and operates the Print Workshop Copy Robot. Kotti-Shop works with children and adults or schools from the neighborhood and artists from all over the world. For “Tender Buttons,” the operators Anette Knol Anette Knol Anette Knol and Stefan Endewardt are realizing a special Kottishop install Endewardt ation. Karin Michalski’s video work “ Karin Michalski’s The Alphabet of Feeling Bad” shows an experimental interview with the theoretician and activist Ann Cvetkovich. Cvetokovich’s moving performance, which is based on conversations with the filmmaker, explains from A to Z terms such as depression, everyday negative feelings like the idea of being in an impasse, feeling paralyzed, not being able to work, being overwhelmed by demands, not being good enough, not making any headway, and gives them new meanings. In the tradition of initiatives such as the SPC (Socialist Patient Collective) from the 1970s, negative feelings are not viewed as individual failure, mistakes, or illness. Rather, the question is raised of how they feel collectively as “public feelings” and how they can be politicized in the context of neo-liberal working conditions as well as homophobia and racism.
Thomas Rehnert presents an interactive machine for Thomas Rehnert “Tender Buttons.” The different parts of the installation (audio synthesizer, video synthesizer, light sensors, video camera, monochord) are connected in a complex way and react to one another, giving rise to a system that continually observes itself, which through feedback connections produces a chaotic and every-new audiovisual result. The installation, conceived as an autopoietic system in which auditory and visual signals influence one another, is not a closed system, though. It not only continually records its own sound, but reacts to the sound in the room and stimulates it in different ways. At the same time, the installation reacts to the movements of the viewer/listener. The viewer finds himself in the middle of a musical instrument, as it were, whose behavior he helps shape.
In Taocheng Wang Taocheng Wang’s and Patrick Banfield’s Patrick Banfield’s video “Practice of Dance”, the Chinese artist wears a traditional Chinese robe and dances in the morning hours from 4.30 to 8.30 a.m. from Frankfurt’s red-light district around the railway station through the bank district to Goetheplatz. During his dance, Taocheng encounters garbage men, drunks, and passers-by on their way to work. While costume and dance seem “Japanese” or “Chinese” somehow, they are both freely improvised – with no historical research having been done. At the same time, his performance blurs the boundaries between male and female roles. It seems arbitrary, playful, melancholy. At the end, the artist casts his self-made silver fan at the feet of the statue of Goethe: Was this drama planned or pure happenstance?