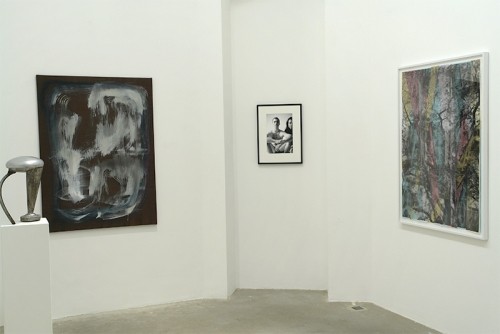 These are the days that Reindeer love
And pranks the Northern star –
This is the Sun’s objective,
And Finland of the Year

SEPTEMBERis pleased to present the group exhibition WINTER SHOW from December 13, 2013 to February 1, 2014, in the context of which the SEPTEMBER/CONTAINER will be restaged. The WINTER SHOW picks up on classical Christmas exhibition themes. As a counterpart to the White Cube in the front rooms, the back room will be furnished as a bourgeois salon in dark purple containing works of art, jewelry by the Parisian jeweler Les Paruriers, and a Christmas tree with handmade balls in Hermès Orange. At the opening we will be serving 5 kg of raw marzipan. We’re also looking forward to a premiere: the young Berlin designer Bobby Kolade presents selected pieces from his collection made in collaboration with the artist Uli Knörzer in the CONTAINER. The group Industrial Witchcraft has designed tree lamps especially for the salon, and in addition xxxx will be showing Murano glass lamps from the 1940s.

The exhibition comprises a kind of essence of the SEPTEMBER program. Works from Kerstin Drechsel’s painting series MITTELERDE will be on view, which the gallery first opened with in 2007.
Parallel to these, Larissa Fassler will show a large-scale drawing from her “Schlossplatz” series, which will be presented at SEPTEMBER after its completion in the beginning of May 2014.

All the gallery’s artists will be present with new or rarely seen works: Henry Kleine with new paintings, Ursula Döbereiner and Elmar Vestner with drawings and collages, and Bettina Allamoda with her “Alien Steel” sculpture from 1988. We’re especially pleased that SEPTEMBER now represents the British painter Flora Whiteley (born 1977), who is responsible for the WINTER SHOW’s YSL invitation motif. Whiteley shows a selection of paintings that explore memory and representation.
As guests, the London artist Nick Fox will show delicate gold dust works and the American art photographer Alyssa De Luccia an intimate double portrait.

SEPTEMBER would like to thank ALTE LAMPEN, Grossbeerenstr. 54, 10965 Berlin for the kind support. A big thank you also to Christian Neuendorf and RILLING INTERIEUR.
www.september-berlin.com