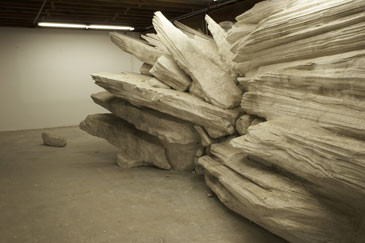 Clamor, 2006, a new work by leading artists Jennifer Allora and Guillermo Calzadilla exploring the relationship between sound, music and war, has its European premiere at the Serpentine Gallery.

A large sculptural chamber, which the artists have described as ‘resembling a bunker, a ruin, a cave, and a sound booth’, hosts live performance events from a musical archive of moments when music has been used in military and political conflict.
For the live performances, held during the opening evening and regularly throughout the course of the exhibition, duelling musicians hidden inside the work itself will play historic military songs creating a monstrous montage of war music, somewhere between a symphony and cacophony.

The artists have created a pre-recorded 40-minute soundtrack, which will be broadcast from within Clamor during the course of the exhibition. It samples music from the Janissary bands of the Ottoman Empire, the resistance hymns of the Viet Cong, the ballads of the October Revolution, as well as contemporary popular music such as Twisted Sister’s ‘We’re not gonna take it’ used by American forces during the Panama invasion in 1989. Clamor stages a musical and corporeal investigation into the nature of these songs in the context of today’s global wars.

Allora & Calzadilla have been collaborating since 1995 and their photographs, videos, sculptures, installations and performative works address the challenging and conflicting effects of globalisation. The artists live in Puerto Rico.

Clamor was commissioned in 2006 by The Moore Space