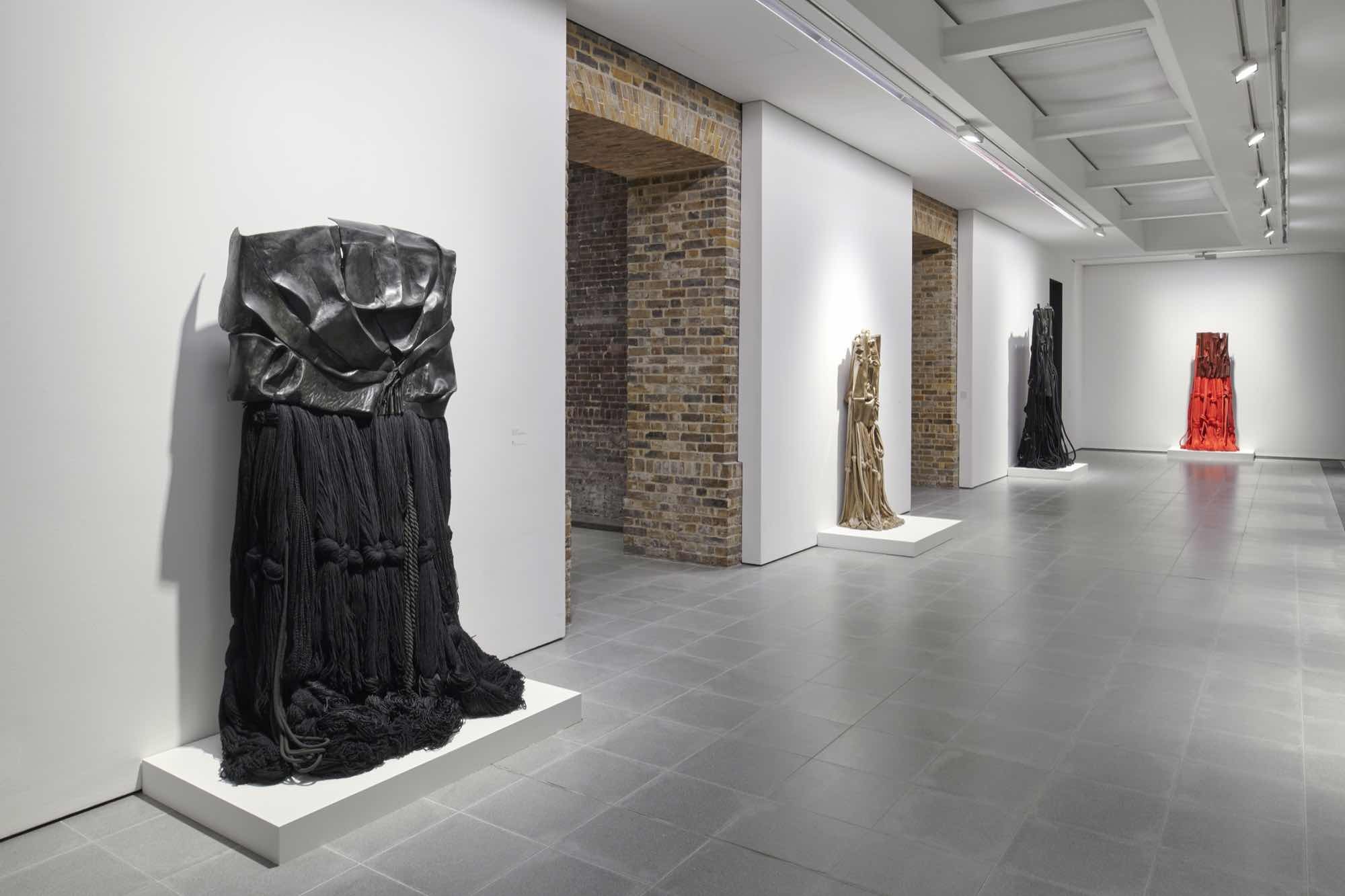 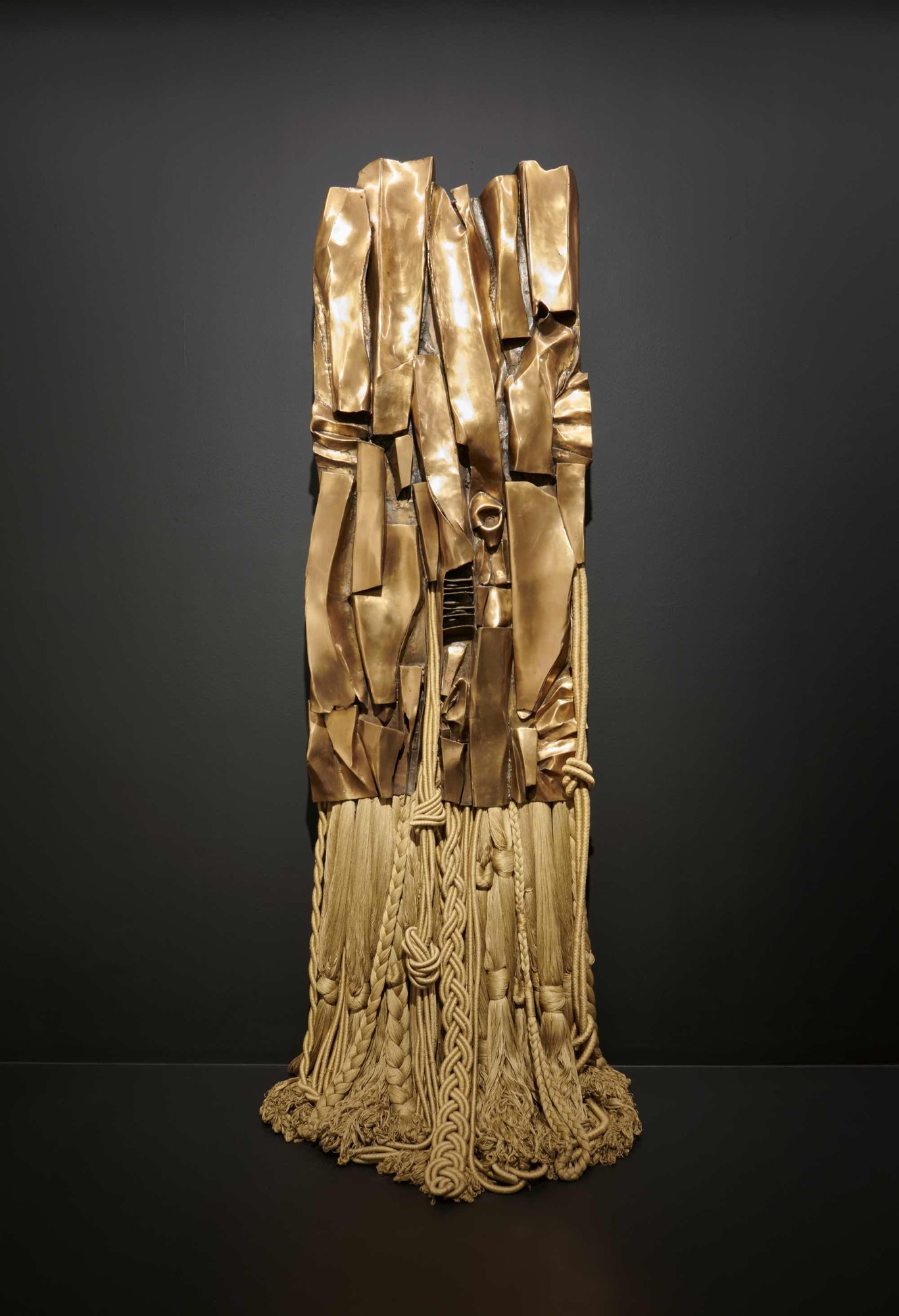 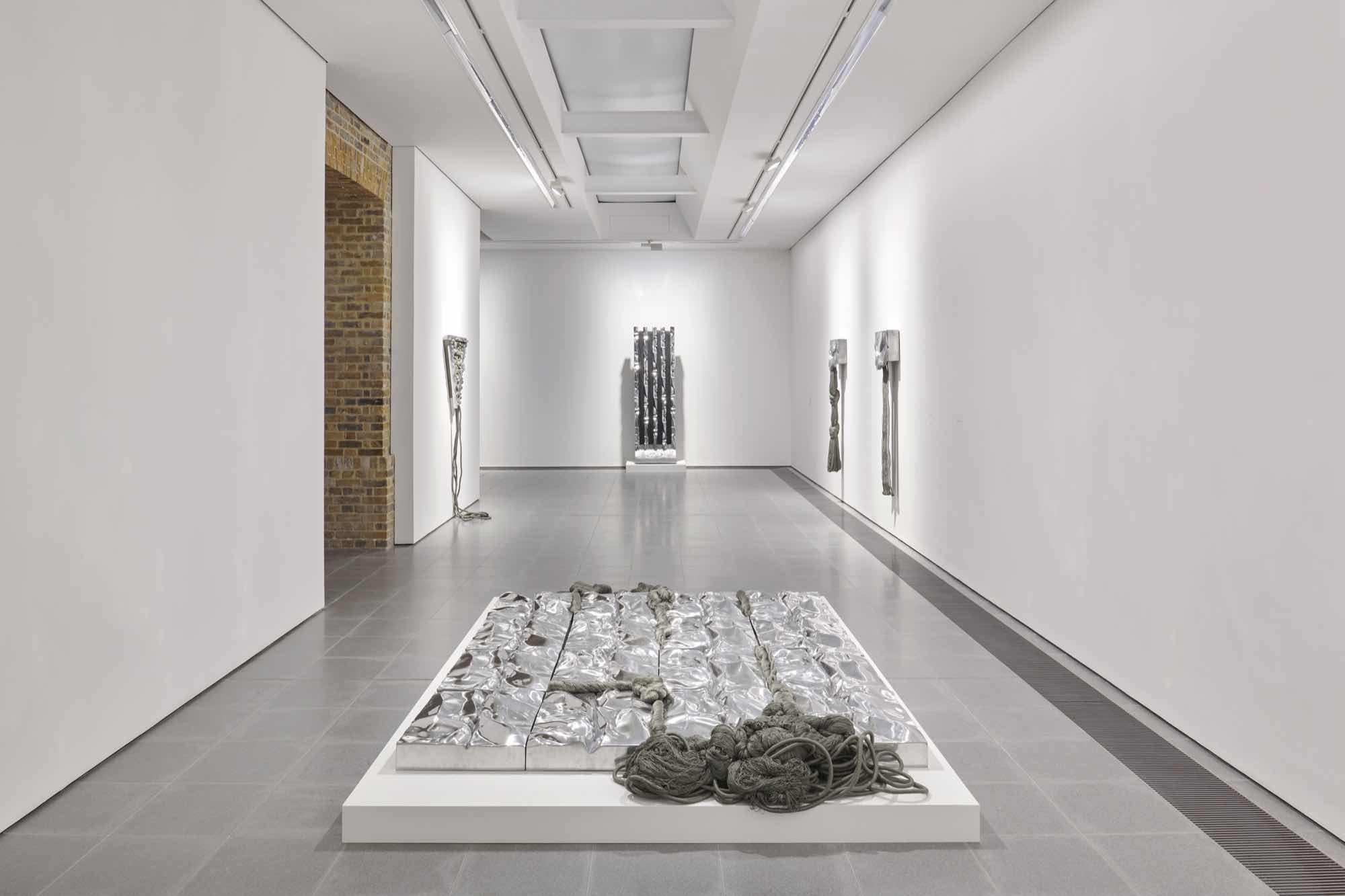 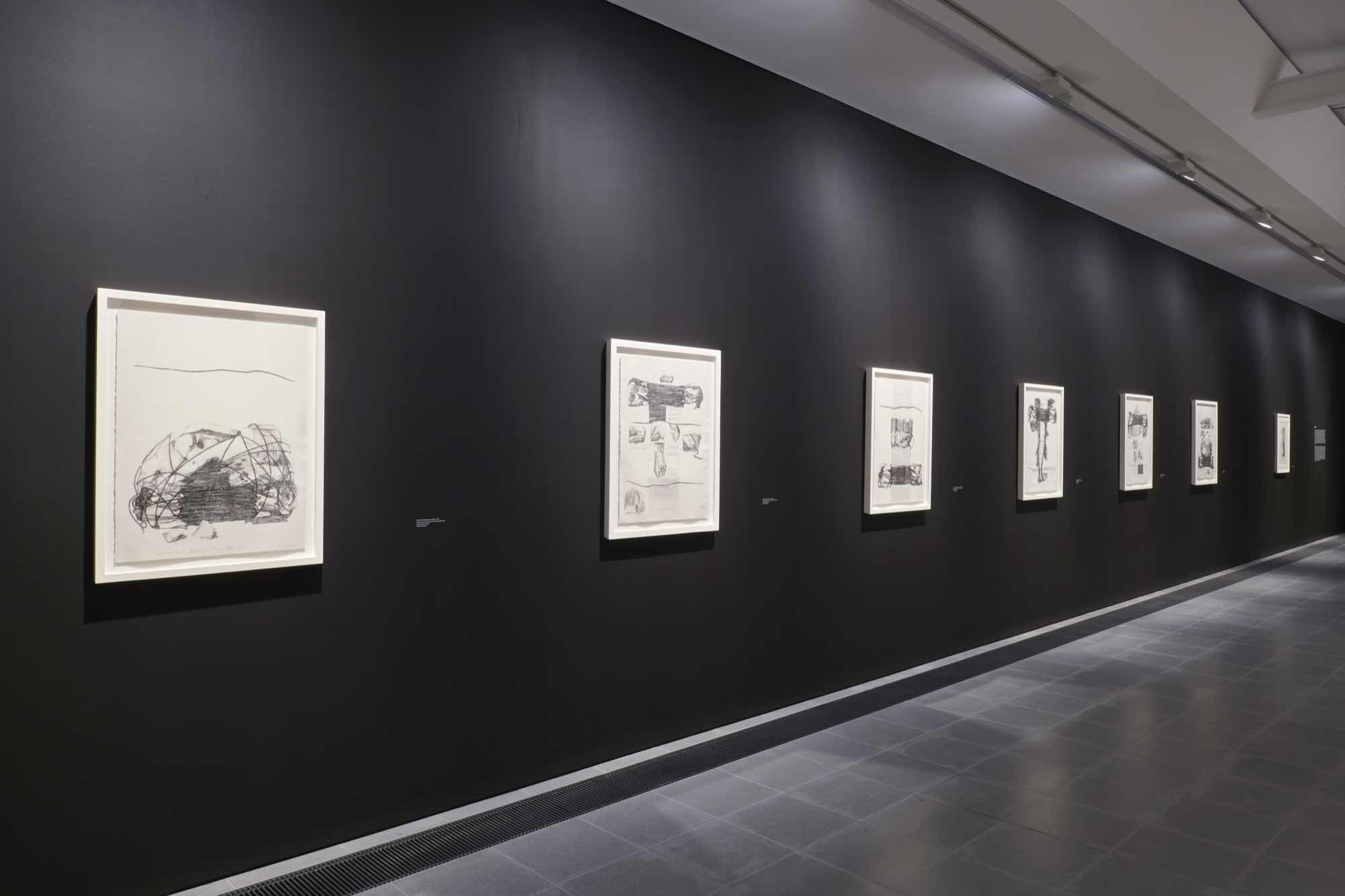 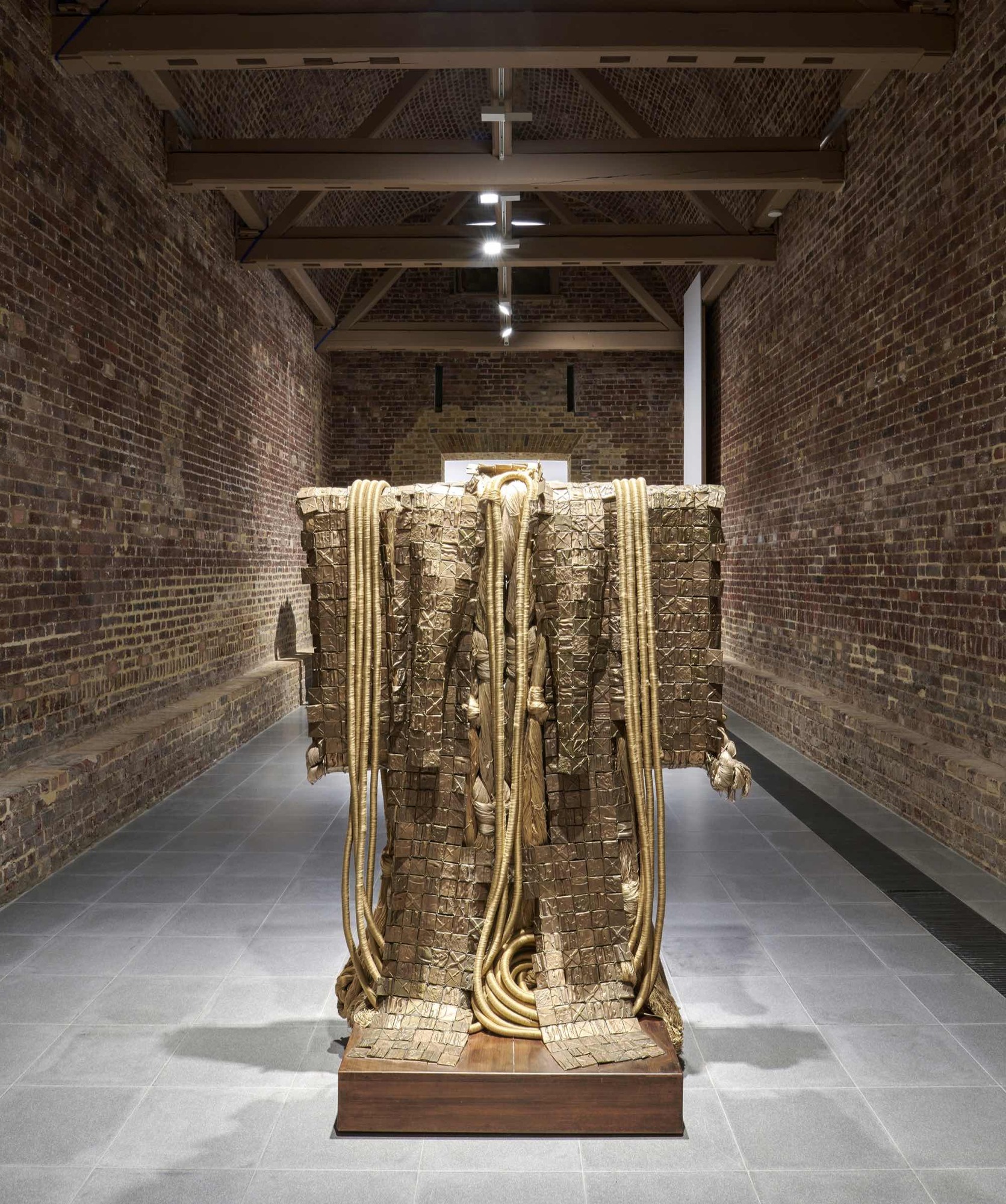 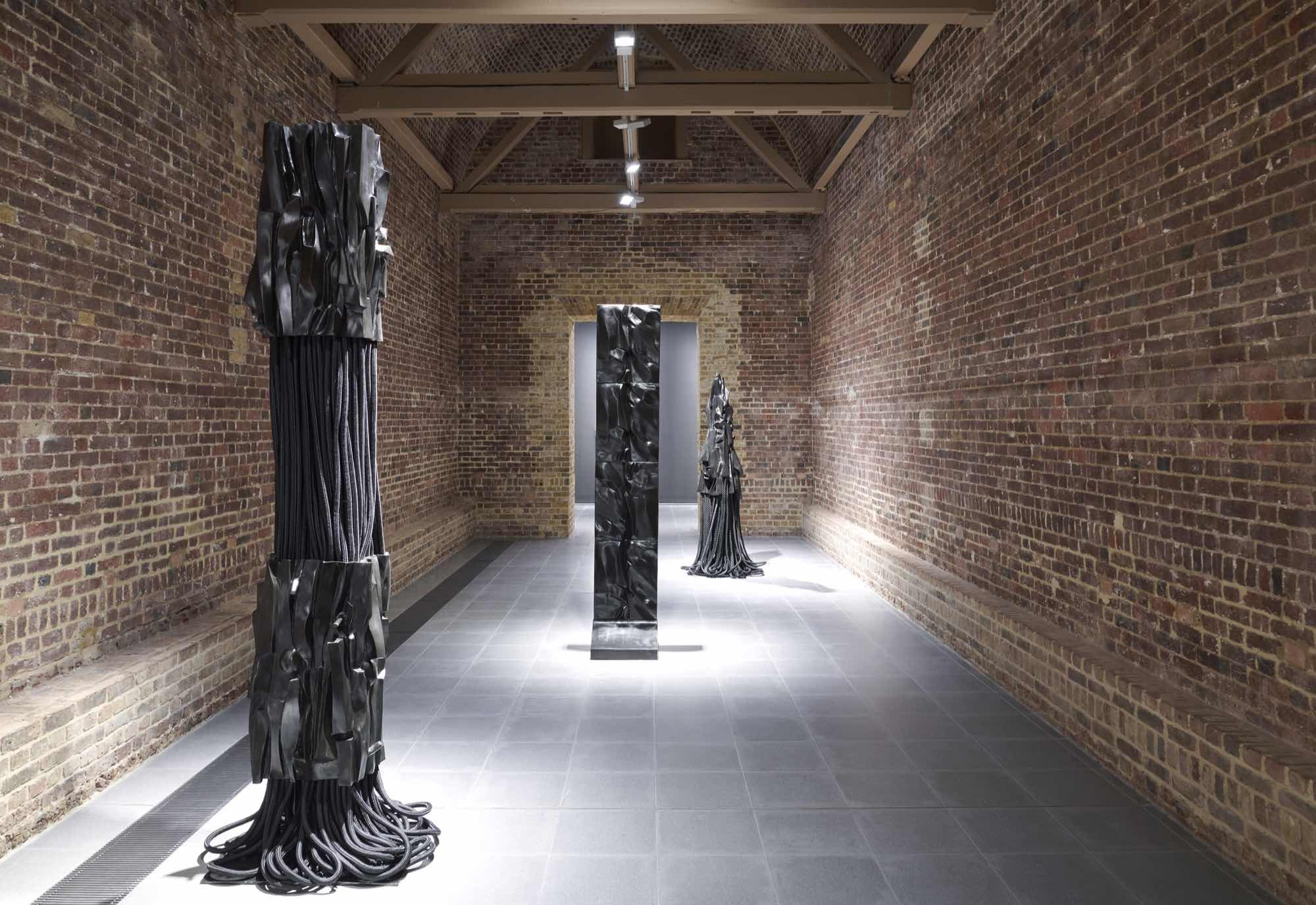 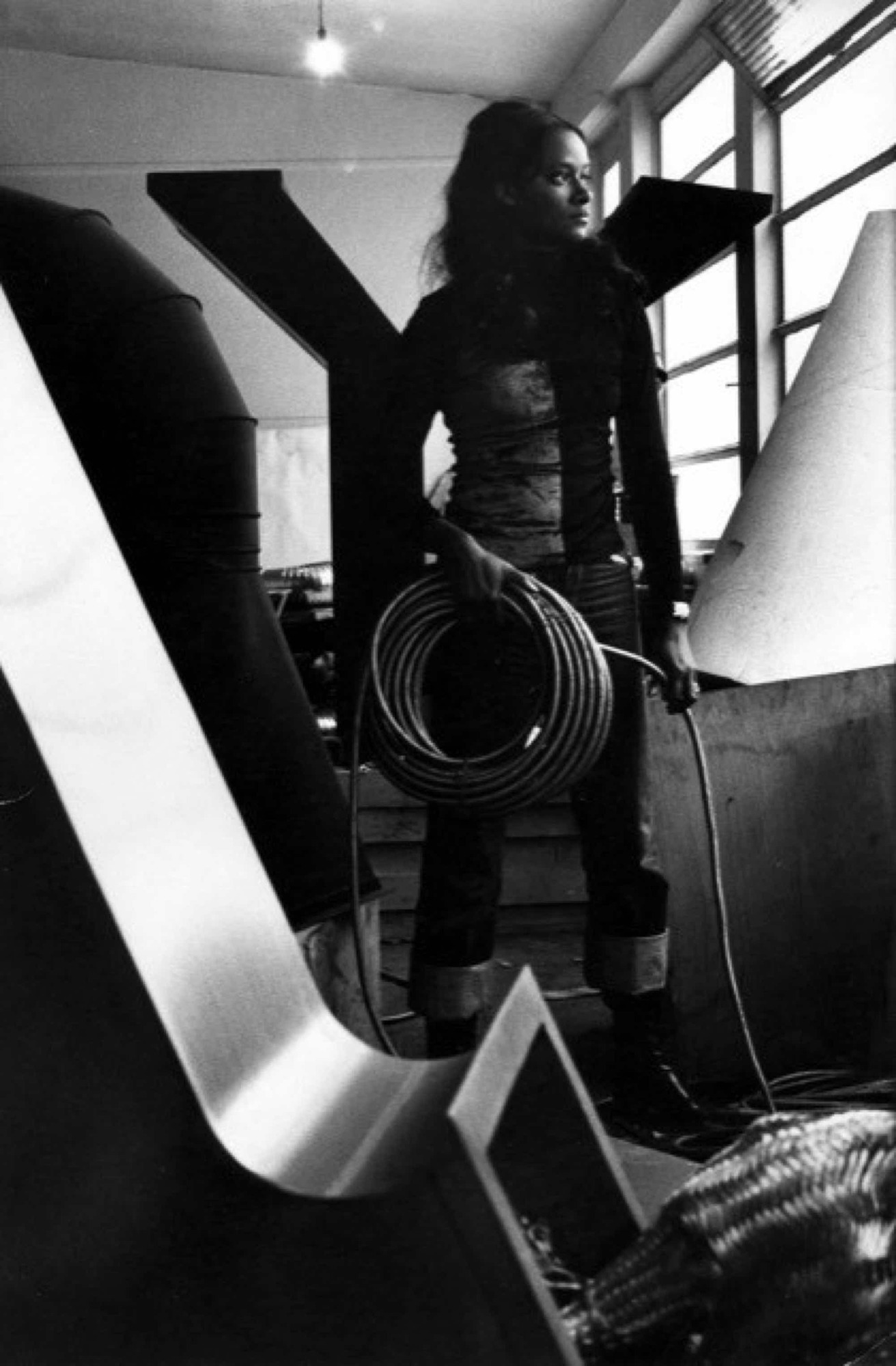 Barbara Chase-Riboud (b. 1939) at her atelier on Rue Dutot, Paris. 1973 by Marc Riboud. Courtesy of the artist
Serpentine is honoured to present Infinite Folds, an exhibition featuring over 30 works by American-born visual artist, sculptor, novelist and poet Barbara Chase-Riboud. On display at Serpentine North from 11 October 2022 to 29 January 2023, this is the artist's first institutional solo presentation in the UK.

With a career spanning over seven decades, Chase-Riboud's innovation in sculptural technique and materiality is characterised by the interplay between folds of cast bronze and aluminium and coils of wool and silk which are knotted, braided, looped and woven. By combining materials with different qualities, such as hard versus soft, light against heavy, and tactile versus rigid, Chase-Riboud's works lend an aesthetic consideration to the sculptural base and speak to the artist’s interest in creating forms that unify opposing forces.

Barbara Chase-Riboud says: "The use of bronze and textile, playing against each other, establishes the heart of my work, a questioning of perception similar to that offered by Baroque sculpture as the conjuncture of folds and pleats of matter which seems a perfect description of my sculpture except that, contrary to the architectural layering, here it is the material that rests in these folds of the soul. Due to the play of materials, my works not only relate to an art of the oxymoron, skillfully combining opposites, but reversing and upsetting the established order and hierarchy of parts as only a true revolutionary does. My art does not cease making folds. There are all kinds of creases, pleats and folds coming from the East, the Greek, Roman, Romanesque, Gothic, Classical, Orient and Africa yet it is truly the Baroque folds and twists and turns that are those pushing movement into infinity: fold upon fold, over fold, under fold, all pushing into the infinity of the fold. These are the unfurled folds of infinity. A double retrospective on two continents is astounding. I am thrilled to see my seminal bodies of work presented together here in the UK at Serpentine where Louise Bourgeois, Frank Bowling and Zaha Hadid have had important exhibitions."

The exhibition features a focused selection of large-scale sculptures alongside works on paper from the 1960s to the present day. The earliest piece in the show, Walking Angel (1962), depicts a hybrid being replete with wings that resemble leaves or an oyster shell. This work is emblematic of the artist's experimental approach to casting techniques, which in the early years of her practice involved casting figurative sculptures in bronze from an assemblage of found animal bones and vegetable matter. Walking Angel also draws on the artist's interest in ancient myths and surrealist influences that would occupy her later pieces which progressively moved towards abstraction. Also on display are Chase-Riboud's early pieces Sejanus (1966) and Meta Mondrian (1967), a scale-model of the artist's first public sculpture commission Wheaton Plaza Fountain (1960, now destroyed) constructed from polished aluminum and cascading silk that emulates water.

Chase-Riboud's most celebrated sculptures from her series The Malcolm X Steles, dedicated to the legacy of the African American Muslim minister and human rights activist who was assassinated in 1965, takes centre stage in the exhibition. Infinite Folds offers visitors the opportunity to not only experience the ways in which Chase-Riboud grappled with the materiality of the 20 'Malcolm's' cast over the course of forty-eight years, but how her continued return to Malcolm X as a subject indicates his profound importance and legacy. Further highlights from this period include the three-metre-tall sculpture Confessions for Myself (1972). Comparable to The Malcolm X Steles, the dark spectral form constructed from strips and ribbons of black patina'd bronze and braided woolsuggests a self-portrait and seemingly marks a return to figuration.

Works on view in the exhibition exemplifies Chase-Riboud's mastery at assembling disparate materials and sculptural techniques to honour historical and cultural figures. These include a selection of sculptures dedicated to the queen of the Ptolemaic Kingdom of Egypt Cleopatra that the artist began in the 1980s following her experience of discovering a Han Dynasty burial in China that contained the emperor's body encased in a traditional ceremonial suit constructed from pieces of jade. The series of 5 works, collectively titled Cleopatra, employs similar techniques in which bronze tiles are intricately sewn together with red thread. The resulting five large-scale works, two of which are on display at Serpentine, allude to the memory of the Egyptian Queen and the ways in which the 'concept of women ruling the earth and shaping society in immutable ways continues to be a revolutionary idea'.

Further exploring the artist's fascination with 'power as wielded by women throughout the ages,' the exhibition premieres one of Chase-Riboud's latest sculptures, La Musica Josephine Red/Black (2021), a three-metre-tall monument dedicated to the American-born dancer, artist and Civil Rights activist Josephine Baker (1905 - 1976), the first Black woman to star in a major motion picture and to enter the French Panthéon.

Bettina Korek, CEO, Serpentine, and Hans Ulrich Obrist, Artistic Director, Serpentine, say: "Barbara Chase-Riboud is a pioneer whose multi-faceted practice explores the timely themes of identity, power and memory. A sculptor, novelist and poet, Chase-Riboud's career spans more than seven decades and over this time she has been a great inspiration to other artists around the world. Aligned with Serpentine's goal of spotlighting groundbreaking innovators whose work deserves greater attention. We couldn't be prouder to present the first UK exhibition by Chase-Riboud."

Chase-Riboud's practice centres on a commitment to foregrounding transnational histories and cultures, drawing inspiration from the artist's experience living, working and travelling across the globe, including Western and Eastern Europe, West Asia and North Africa and South-East Asia. Throughout this trajectory, Chase-Riboud's encounters with classical architecture and sculpture, alongside historical artefacts from Western and non-Western traditions, evolved into a recurring fascination with the public monument.

Underscoring the artist's advocacy for those luminary figures who continue to shape our society today but who remain underacknowledged, the exhibition also marks the largest European presentation of the artist's major series The Monument Drawings since their debut at the Metropolitan Museum of Art, New York, in 1999. In them Chase-Riboud has rendered imaginary monuments to unsung political, artistic and literary figures, events and spaces. These include tributes to Shaka Zulu, Alfred Musil, Anna Akhmatova and Lady Macbeth, among many others.

Taken together, these works consider notions of memory, legacy and power, prompting a consideration of who or what event, may be commemorated, and for whom. On view at Serpentine, at the heart of Kensington Gardens where public statuary frames the landscape, Chase-Riboud highlights the often-unacknowledged figures that continue to shape our impressions and understanding of the past and present.

Parallel to her sculptural practice, Chase-Riboud is a distinguished poet and writer of historical fiction. In October 2022, Princeton University Press releases I Always Knew: A Memoir, an intimate and vivid portrait of Chase-Riboud's life as told through the letters she wrote to her mother, Vivian Mae Chase, between 1957 and 1991. The Pulitzer Arts Foundation, in Saint Louis, Missouri, USA. features Barbara Chase-Riboud Monumentale: The Bronzes from 16 September 2022 to 5 February 2023. The International Sculpture Center (ISC) will award Chase-Riboud with the 2022 Lifetime Achievement Award for her exemplary contributions to the field of sculpture.