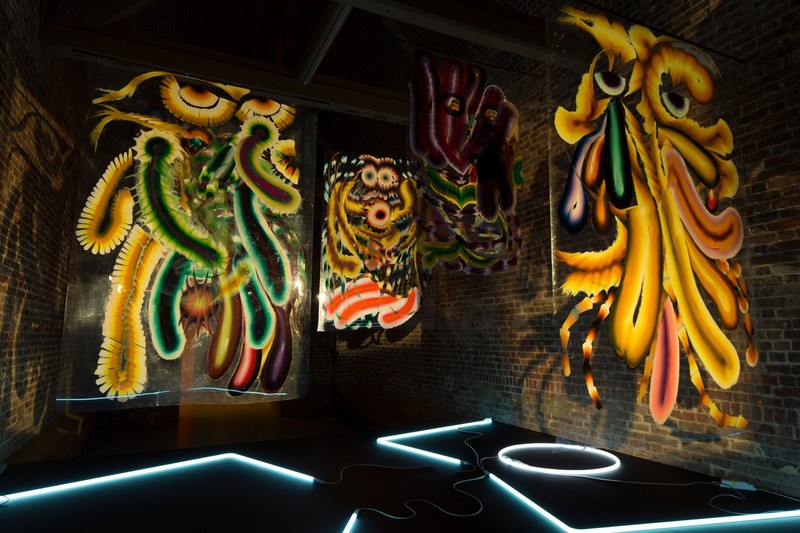 The Serpentine presents the first major exhibition of work by Kerstin Brätsch and Adele Röder in a UK public institution. Brätsch and Röder are based in New York and London. While each has her own practice, the artists have worked collaboratively as DAS INSTITUT since 2007.

The exhibition at the Serpentine Sackler Gallery presents works resulting from their collaboration as well as pieces from their individual practices.
In her work, Brätsch uses painting to question the ways in which the body can be expressed – psychologically, physically and socially – while Röder searches for basic symbolic forms to create a non-verbal language utilising clothing, posture and light. As DAS INSTITUT the artists attempt to communicate the inexpressible – the intuitive, irrational element of human experience and relationships.
DAS INSTITUT focuses on the kinds of communication that occur between individuals, and this has led them to collaborate with other artists. Featured within the show are a number of additional contributions: a film by historian and filmmaker Alexander Kluge, a site-specific sound work by Sergei Tcherepnin, a series of traditional Hawaiian Hula dances organized by Ei Arakawa, and a fragmented portrait of Brätsch and Röder by Allison Katz.
The exhibition DAS INSTITUT focuses on the transformative properties and effects of light on bodies and spaces. The skylights of the gallery are covered with coloured gels and the key sources of light are the artworks themselves, as projected images, as stained glass and as neon shapes. Traces of Brätsch and Röder’s own physical presence are also made visible: silhouettes and photographs of their bodies are incorporated into a number of works, such as the Am Sonntag Series (2014), while their faces and figures emerge through the surfaces of pieces, such as Dark Codex (2015).
www.serpentinegalleries.org