In the darkest hour there may be light 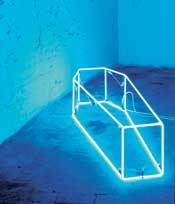 In the darkest hour there may be light:
Works from Damien Hirst’s murderme collection

Damien Hirst’s groundbreaking and controversial work has made him one of the world’s best-known living artists. From the start of his career, Hirst has adopted the role of curator, organising a series of exhibitions with a group of young British artists who would come to define cutting-edge art in the 1990s. It began with the now legendary Freeze exhibition of 1988, when he was still a student at Goldsmiths College, University of London, and was followed by Modern Medicine and Gambler, both co-organised with Carl Freedman and Billee Sellman in 1990. In 1994, he curated the highly acclaimed Some Went Mad, Some Ran Away... at the Serpentine Gallery.

As well as being a producer and a curator, Hirst is also a passionate and obsessive collector of art. Like many artists he began collecting by exchanging works with his friends – artists such as Tracey Emin, Angus Fairhurst and Sarah Lucas. His sensibility developed in concert with his wide-ranging artistic interests, however, Hirst emphasises that this collection has evolved without a master plan and is simply a consequence of the basic desire to amass objects. Now known as the ‘murderme collection’, this significant accumulation of works spans several generations of international artists, from well-known figures such as Francis Bacon, Jeff Koons, Richard Prince and Andy Warhol, to artists in earlier stages of their careers like Rachel Howard, Nicholas Lumb and Tom Ormond.

In the darkest hour there may be light is the first public exhibition of the murderme collection and Hirst has worked closely with the Serpentine on the selection and presentation of the sculptures, paintings, photography and installations in and around the Gallery. It offers a fascinating insight into Hirst’s collecting acumen and personal interests, as he says “I always think collections are like a map of a man’s life”.