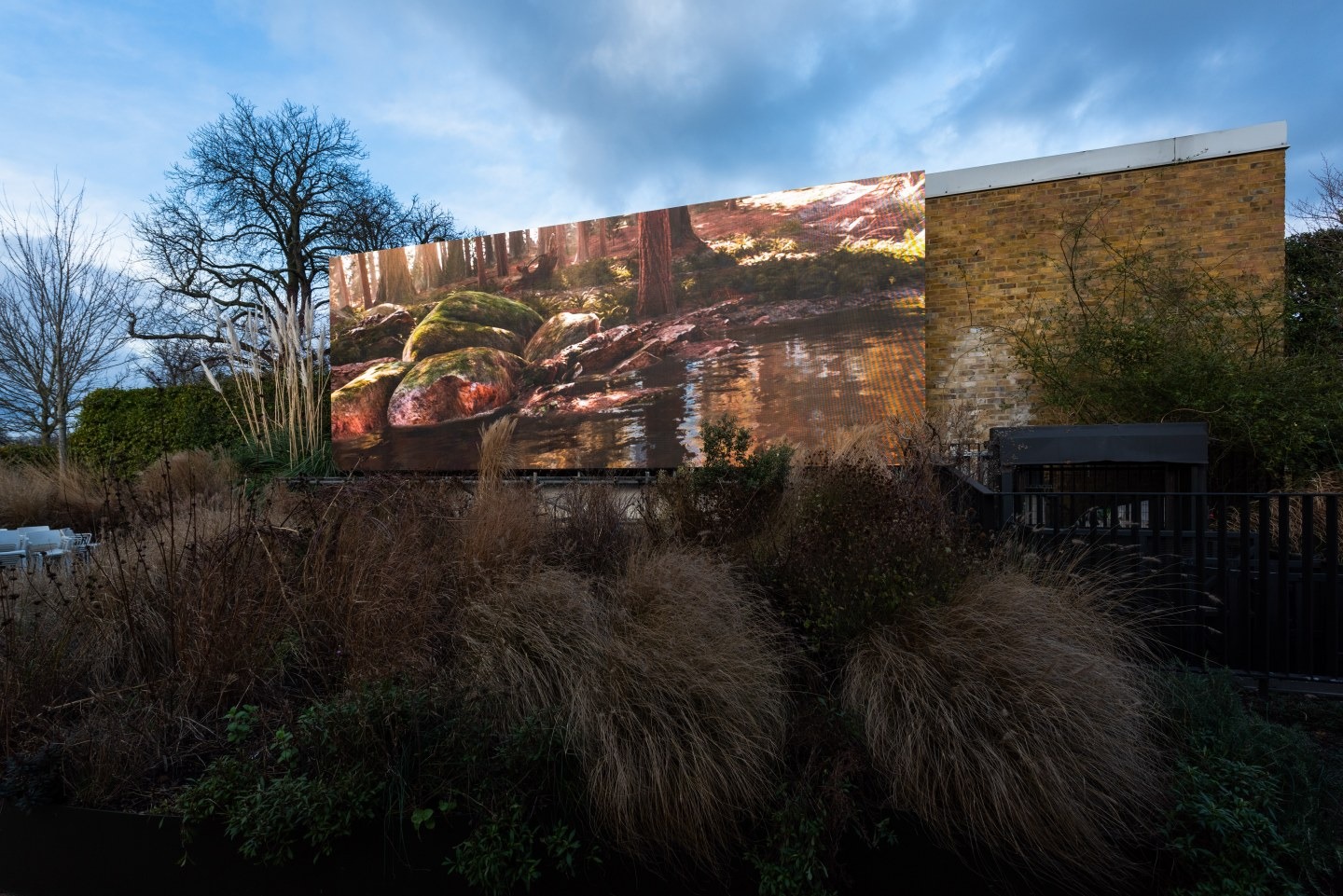 Discover the world of Catharsis in a major outdoor installation (opening 28 Jan) on the grounds of the Serpentine Galleries' Zaha Hadid-designed extension, set against the beautiful green spaces of Kensington Gardens. Access the outdoor installation via Chucs restaurant where a portrait version of the work is also on view. Please note: Visitors are encouraged to bring their own headphones to experience the accompanying soundscape via live the livestream at catharsis.live

Catharsis immerses audiences within a digital simulation of a re-imagined old-growth forest, a forest that has developed undisturbed over hundreds of years. Based on field work undertaken by Jakob Kudsk Steensen and his primary collaborator Matt McCorkle, the work’s virtual ecosystem and synchronised audio comprise 3D textures and sounds gathered from several North American forests.

Set up as a single continuous shot that moves from the watery underground roots to the surveying viewpoint of the canopy, Catharsis draws on Steensen’s conception of ‘slow media’ whereby digital technologies can foster attention to the natural world and create new narratives about our ecological futures. Catharsis becomes a digital portal, a simulated journey that offers audiences access to past and present natural environments, slowed down and up close.

Catharsis follows Steensen’s previous work for the Serpentine, The Deep Listener (2019), an augmented reality app for mobile devices that offered an audio-visual ecological trail through Kensington Gardens and Hyde Park, to both see and hear five of London’s species: London plane trees, bats, parakeets, azure blue damselflies and reedbeds. The Deep Listener is the first Augmented Architecture commission, in collaboration with Google Arts and Culture and Sir David Adjaye OBE. These works demonstrate the Serpentine’s commitment to new experiments in art and technology that has included an augmented reality tool for visualising the UK’s extreme inequality by Hito Steyerl and a weather prediction model that correlates historic weather data with polling data from major political events such as Brexit by James Bridle.

Kudsk Steensen collaborates with NGO’s, residencies, scientists and artists from different fields and ventures on excursions where he collects organic material, which is digitised and converted into digital worlds with 3D scanners, photogrammetry, satellite data and computer game software. Inspired by ecology-oriented science fiction and conversations with biologists and ethnographers, his projects are ultimately virtual simulations populated by mythical beings existing in radical ecological scenarios.

Kudsk Steensen has exhibited internationally at the 5th Trondheim Biennale for Art and Technology, the Carnegie Museum of Art, GUEST, GHOST, HOST: MACHINE! Marathon, Serpentine Galleries, Jepson Center for the Arts, Time Square Midnight Moment, MAXXI Rome, FRIEZE London, Podium, and Ok Corral. He was shortlisted for the Future Generation Art Prize 2019, and he has received awards from the Danish Arts Foundation, The Augustinus Foundation, and the Lumen Arts Prize. His work has shown at Sundance, TriBeCa and Cannes among other film festivals. Steensen is an alumni of NEW INC, a technology and culture incubator by The NEW MUSEUM, in NYC.