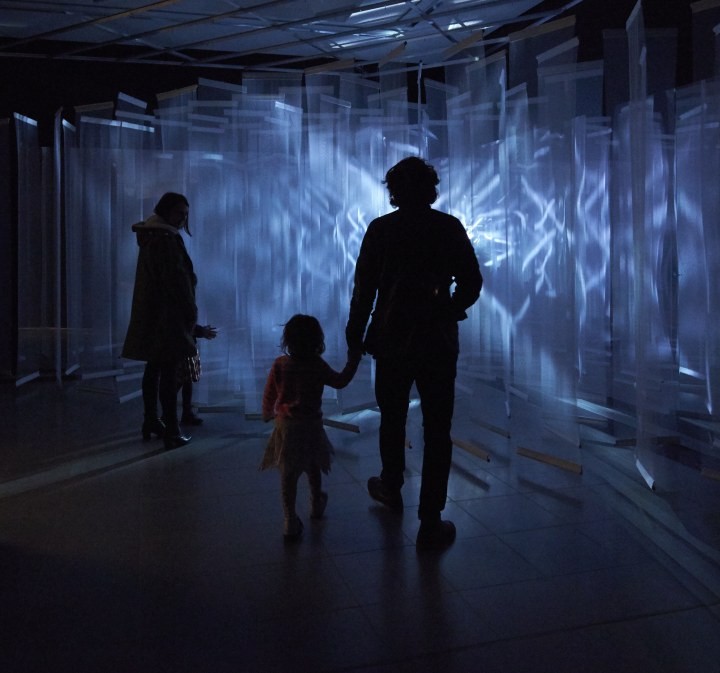 The first major exhibition in the UK by Argentinian-born artist Julio Le Parc (1928, lives in France), who is known for creating artworks that dynamically animate and transform space through light. Featuring seminal installations and interactive works from the early 1960s to the present day, Le Parc’s playful and mesmerising exhibition transforms the Gallery and actively involves visitors.

Le Parc began to make geometrical abstract paintings in 1959 based on pre-determined systems, first in black and white, then in colour. In the early 1960s he began working in three dimensions, incorporating moving, projected and reflected lights. From 1964 onwards he began producing works based on distorting mirrors and the displacement of the spectator by means of labyrinths and play rooms.
He is known for using projected, moving, and reflected light to create works of art in constant flux. At the heart of his practice is a desire to experiment with our engagement and perception of art, thereby altering our perspective on the roles of the artist, spectator and the institution. Through his experimentation with light, Le Parc creates a situation of visual instability, in the work and in the viewer’s experience.

He was a founding member of the activist Groupe de Recherche d’Art Visuel (GRAV), which is an acronym and a play on the French word for ‘serious’. The group confronted the establishment through organised, shared experiences and by releasing manifestos that raised awareness on the role of art within society. While defending the rights of visual artists, Le Parc was briefly expelled from Paris following the social unrest of 1968. A series of previously unseen political drawings, alongside unseen sketches of portraits and geometric shapes, forms part of this exhibition. These drawings are presented within the artist’s book that accompanies the show alongside a fictional interview, imagined by film-maker and novelist Edgardo Cozarinsky, between Le Parc and the late Italian artist Lucio Fontana who was his teacher from 1943 to 1946 at the Beaux-Arts in Paris.

The exhibition at the Serpentine Sackler Gallery highlights the different dimensions in Le Parc’s works, from his politicised drawings and interactive works to his iconic light installations. Experimentation with light as well as the physical involvement and visual stimulation of the spectator have been crucial throughout Le Parc’s career. At the Serpentine Sackler Gallery, the visitor’s participation is both passive and active, with the exhibition design reminiscent of an amusement arcade and its numerous booths. While Le Parc’s light installations offer an immersive experience, his interactive ‘game’ works become a place for activity. Born out of his political activism, the ‘games’ include unstable, moving floors as well as punch bags and cut-out target silhouettes upon which are depicted familiar political archetypes, such as a dictator, a politician, a pacifist, a policeman and a museum director. The Limited Edition produced on the occasion of his exhibition is a silkscreen print of the target image from the interactive installation Choisissez vos Ennemis (1970) from his Jeux Enquête series, which is included in the show.

Le Parc held his first solo exhibition at the Howard Wise Gallery, New York (1966), with more recent solo exhibitions at the Daros Foundation, Buenos Aires, (2014) and the Palais de Tokyo in Paris (2013) that were widely positively received to critical and positive acclaim, the latter having broken visitor number records. His work has been the subject of numerous retrospective exhibitions in major museums in Havana, Düsseldorf, Montevideo, Caracas, Asunción, Mexico City, Stockholm, Berlin, Madrid, Barcelona, Santiago de Chile and Porto Alegre.
This exhibition is part of the Serpentine Winter Programme, which includes an exhibition by German artist Reiner Ruthenbeck that runs concurrently at the Serpentine Gallery.

Julio Le Parc was born in Mendoza, Argentina in 1928 and currently lives and works in Paris where he has resided since the late 1950s. In 1964 he was awarded the Special Prize (acquisition) in the Premio Internacional Torcuato Di Tella, Buenos Aires, Argentina, and in 1966, the International Painting Grand Prix at the XXXIII Venice Biennale, Italy. Following his expulsion from Paris in 1968, he travelled around various European countries only to return five months later when the restriction was revoked. Le Parc participated in Unofficial Latin America, held in Paris, and the Medellín Biennial in Colombia in 1970. Le Parc’s first solo exhibition was held at the Howard Wise Gallery, New York (1966), which was followed by his first retrospective exhibition, held at the Instituto Di Tella in Buenos Aires, Argentina (1967). Subsequently Le Parc has had numerous retrospective exhibitions in major museums in Havana, Düsseldorf, Montevideo, Caracas, Asunción, Mexico City, Stockholm, Berlin, Madrid, Barcelona, Santiago de Chile, and Porto Alegre. His most recent solo exhibitions were held at the Palais de Tokyo in Paris (2013), Casa Daros in Rio de Janeiro (2014) and the Museu de Arte Latinoamericano de Buenos Aires (2014). Notable writings include: A propósito de arte espectáculo... (With regard to spectacle art...); Función social del arte en la sociedad contemporánea (The social function of art in contemporary society); Color 1959 (Colour 1959); and El artista en el context social actual (The artist in the present social context). He participated, with the Denuncia group, in the collective work Torture (1972) and joined the International Brigade of Antifascist Painters (1975).
www.serpentinegallery.org