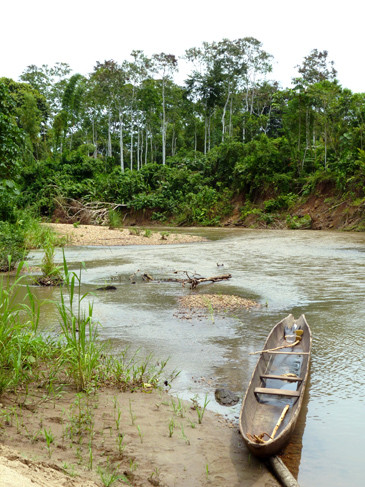 © Marcus Coates
The Trip 2010
Documentary photograph
Courtesy of the artist
MARCUS COATES
The Trip
3 March - 2 May, 2011

The Serpentine Gallery, in collaboration with St. John’s Hospice, London, launches a major new project by UK-based artist Marcus Coates. The film is produced as part of the Serpentine’s ongoing Skills Exchange project and is the result of a long-term residency by Coates at the hospice.

Coates began the project by asking hospice outpatients to suggest ways that vicarious action could enrich their experiences and offered to enact unfulfilled dreams on their behalf. Suggestions ranged from the creation of an exhibition of photography, to a parachute free-fall, to a trip to the Amazon. The last of these requests, made by the late Alex H., was realised by the artist in 2010.

Coates was given precise instructions for the trip. He was asked to travel to an isolated village in the Amazon jungle and to ask the indigenous people a set of prearranged questions. The project was an exchange, Coates offered a way of expanding Alex H’s imaginative world beyond the hospice and in return Alex H. offered Coates a challenge to see the world for someone else.

The Trip presents audio recordings of the conversations between outpatient and artist firstly as they plan the journey and then as they share the memories following Coates’ return.

While Coates’ work is well known for questioning the role of the artist in relation to a range of social issues or problems – often in conjunction with official governmental organisations – in The Trip he develops this central concern through exchanges between individuals, bringing a level of sensitivity and intimacy to the resulting presentation.
www.serpentinegalleries.org