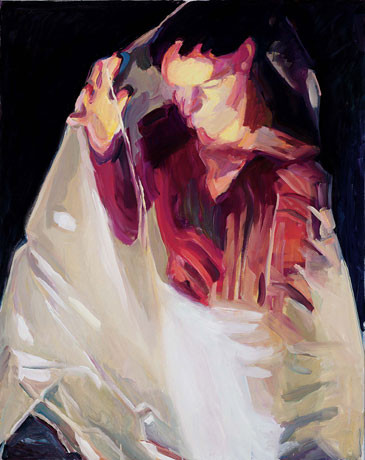 Viennese painter Maria Lassnig (b.1919) has been producing work over a period of 60 years in Paris, New York and Vienna. She is an avant-garde pioneer with a feminist viewpoint, continuing to produce some of her best work. Lassnig's powerful, bold and introspective paintings investigate human emotions and bodily sensations.
The Serpentine exhibition, the first solo presentation of her work in a public gallery in the UK, will include the first ever showing of a selection of Lassnig’s sensational fresh and vibrant oil paintings from the last three years and rarely exhibited films.
Lassnig uses bold forms and strong colours to create portraits and semi-figurative abstractions, which reject the static tendencies of traditional portraiture. She coined the phrase ‘body-awareness paintings’ to describe a visual language that she invented and uses in her work to depict the invisible aspects of inner sensations where there is a continual resistance against the repetitive and static. She has repeatedly used her own body, in her view an inexhaustible subject, as a tacit source to explore human sensory experience.
Lassnig was born in Carinthia, Austria, in 1919, and trained in Vienna. She spent several years in Paris in the 1950s and 1960s where she was exposed to Abstract Expressionism and Surrealism. She lived in New York from 1968 to 1980, making films that used her ‘body-awareness’ as a basis for her remarkably inventive and humorous narratives. On her return to Austria in 1980, she became the first female Professor of Painting in a German-speaking country at Vienna University of Applied Arts. Her work found a greater critical response when she represented Austria in the 39th Venice Biennale that year, and was featured in Documenta 7 in 1982.
Lassnig’s work was featured in the major touring survey Wack! Art and the Feminist Revolution at The Museum of Contemporary Art, Los Angeles, 2007, and has been the subject of numerous solo exhibitions internationally, including Museum of Modern Art, Ludwig Foundation, Vienna, 1999; Centre Georges Pompidou, Paris, 1995; Stedelijk Museum, Amsterdam, 1994; and Kunstmuseum Dusseldorf, 1985. The Serpentine Gallery exhibition is curated by Julia Peyton-Jones and Hans Ulrich Obrist in association with Rebecca Morrill.
www.serpentinegallery.org