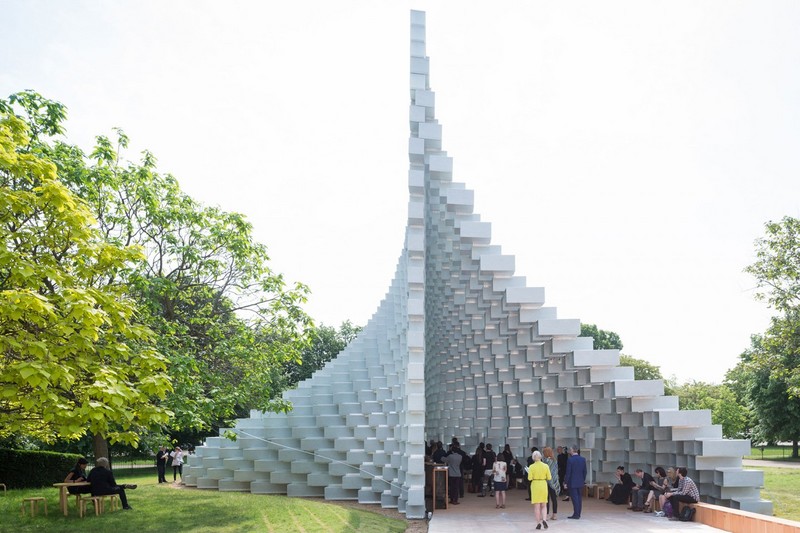 In tandem with the 16th Pavilion in 2016, the Serpentine Galleries has expanded its internationally acclaimed programme of exhibiting architecture in a built form by commissioning four architects to each design a 25sqm Summer House. The four Summer Houses are inspired by the nearby Queen Caroline’s Temple, a classical style summer house, built in 1734 and a stone’s throw from the Serpentine Gallery. In line with the criteria for the selection of the Pavilion architect, each architect chosen by the Serpentine has yet to build a permanent building in England.

The Serpentine Pavilion, designed by Bjarke Ingels Group (BIG), is an ‘unzipped wall’ that is transformed from straight line to three-dimensional space, creating a dramatic structure that by day houses a café and free family activities and by night becomes a space for the Serpentine’s acclaimed Park Nights programme of performative works by artists, writers and musicians. Kunlé Adeyemi’s Summer House is an inverse replica of Queen Caroline’s Temple - a tribute to its robust form, space and material, recomposed into a new sculptural object. Barkow Leibinger were inspired by another, now extinct, 18th Century pavilion also designed by William Kent, which rotated and offered 360 degree views of the Park. Yona Friedman’s Summer House takes the form of a modular structure that can be assembled and disassembled in different formations and builds upon the architect’s pioneering project La Ville Spatiale (Spatial City) begun in the late 1950s. Asif Khan’s design is inspired by the fact that Queen Caroline’s Temple was positioned in a way that would allow it to catch the sunlight from The Serpentine lake.

We decided to work with one of the most basic elements of architecture: the brick wall. Rather than clay bricks or stone blocks, however, the wall is erected from pultruded fibreglass frames stacked on top of each other. The wall is then pulled apart to form a cavity within it, to house the events of the Pavilion’s programme. This unzipping of the wall turns the line into a surface, transforming the wall into a space. A complex three-dimensional environment is created that can be explored and experienced in a variety of ways, inside and outside. At the top, the wall appears like a straight line, while the bottom of it forms a sheltered valley at the entrance of the Pavilion and undulating hillside towards the Park.

The unzipped wall creates a cave-like canyon lit through the fibreglass frames and the gaps between the shifted boxes, as well as through the translucent resin of the fiberglass. As a result, the shifting overlaps as well as the movement and presence of people outside create a lively play of light and shadow on the cave walls within.
The materials include wooden floors and extruded Fiberline profiles, providing every surface with a warm glow and linear texture – from the mesh of woven glass fibres to the undulating lines of the grain of wood.

This simple manipulation of the archetypal space-defining garden wall creates a presence in the Park that changes as you move around it and as you move through it. The North-South elevation of the Pavilion is a perfect rectangle. The East-West elevation is an undulating sculptural silhouette. Towards the East-West, the Pavilion is completely opaque and material. Towards the North-South, it is entirely transparent and practically immaterial. As a result, presence becomes absence, orthogonal becomes curvilinear, structure becomes gesture, and box becomes blob.
Bjarke Ingels - BIG, February 2016

Julia Peyton-Jones, Director, and Hans Ulrich Obrist, Co-Director, Serpentine Galleries, said:
“We are delighted to reveal the designs for our expanded Architecture Programme. As you can see from the architect’s renders, Bjarke Ingels has responded to the brief for a multi-purpose Pavilion with a supremely elegant structure that is both curvaceous wall and soaring spire, that will surely serve as a beacon - drawing visitors across Hyde Park and Kensington Gardens to visit the Pavilion, the Summer Houses and our major exhibitions by Alex Katz and Etel Adnan. The response to design a Summer House inspired by the 18th Century Queen Caroline’s Temple by our four international architects has been equally inspired and has produced four unique spaces for visitors to explore this summer.“

The Serpentine's Pavilion commission, conceived in 2000 by Director Julia Peyton-Jones, has become an international site for architectural experimentation and has presented projects by some of the world's greatest architects. Each Pavilion is sited on the Serpentine Gallery's lawn for four months and the immediacy of the commission – taking a maximum of six months from invitation to completion – provides a unique model worldwide.

The selection of the architects, chosen for consistently extending the boundaries of architecture practice, is led by the Serpentine’s core curatorial thinking, introducing contemporary artists and architects to a wider audience. The brief is to design a 300-square-metre Pavilion that can be used as a café by day and a forum for learning, debate and entertainment at night. The Build Your Own Pavilion competition invites young people aged 8 to 14 to submit their Pavilion designs online and at workshops across the UK during the summer of 2016.

The Serpentine Pavilion is one of the top-ten most visited architectural and design exhibitions in the world. There is no budget for the project, it is realised through sponsorship, help-in-kind support and the sale of the Pavilion.

The café in the Pavilion for the summer is run by Kofler & Kompanie, who also operate The Magazine Restaurant at the Serpentine Sackler Gallery.

Connect to our free public WiFi to access a Mobile Tour of the Pavilion and Summer Houses with additional content, including videos of the architects talking about their designs.

Artist Anna Lucas has created a kit of parts for families to use to explore the 2016 Pavilion, Summer Houses and surrounding landscape. The 2016 Architecture Family Pack: Loose Parts is free for families and available at the Serpentine throughout the summer.
www.serpentinegallery.org