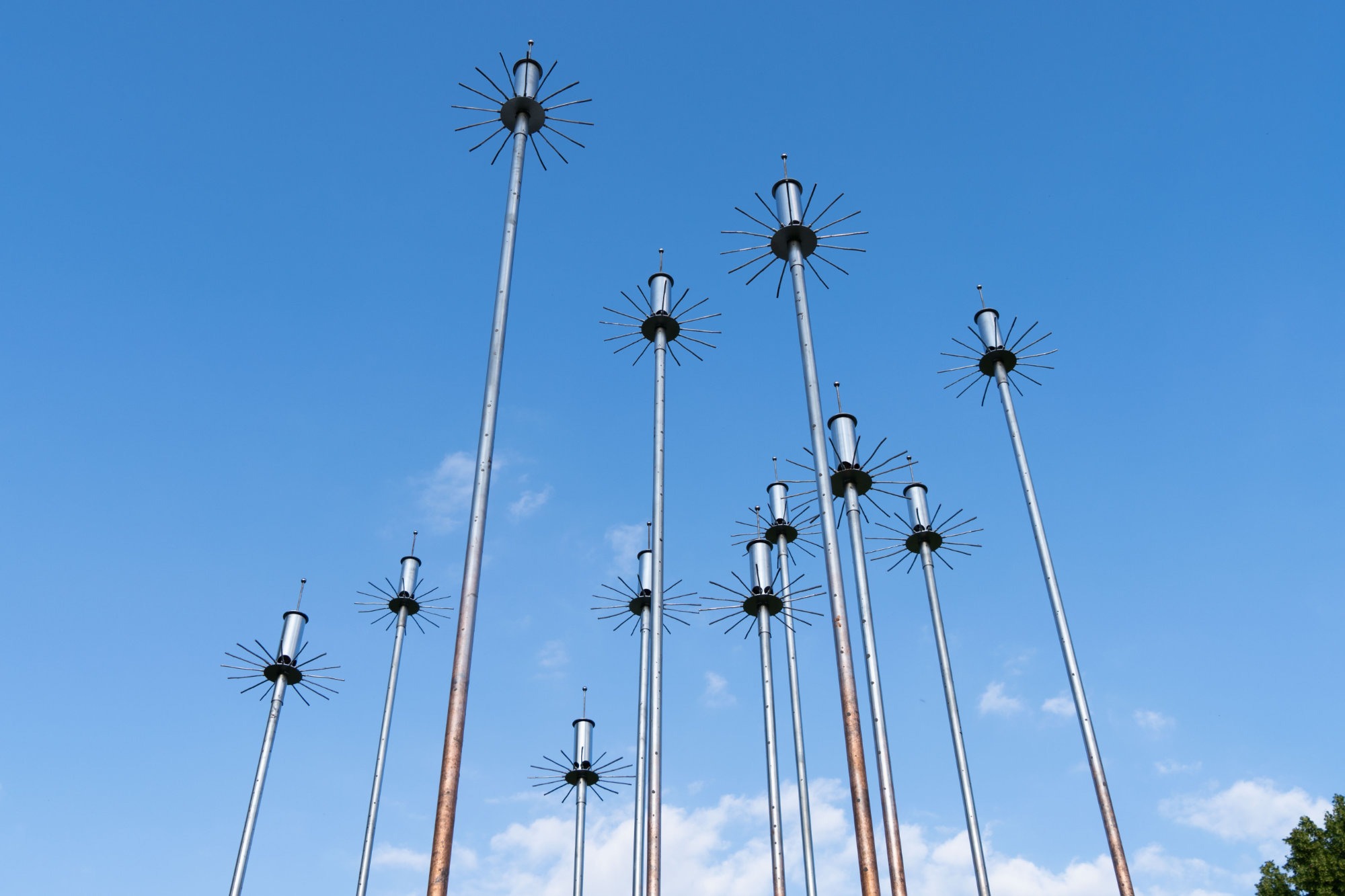 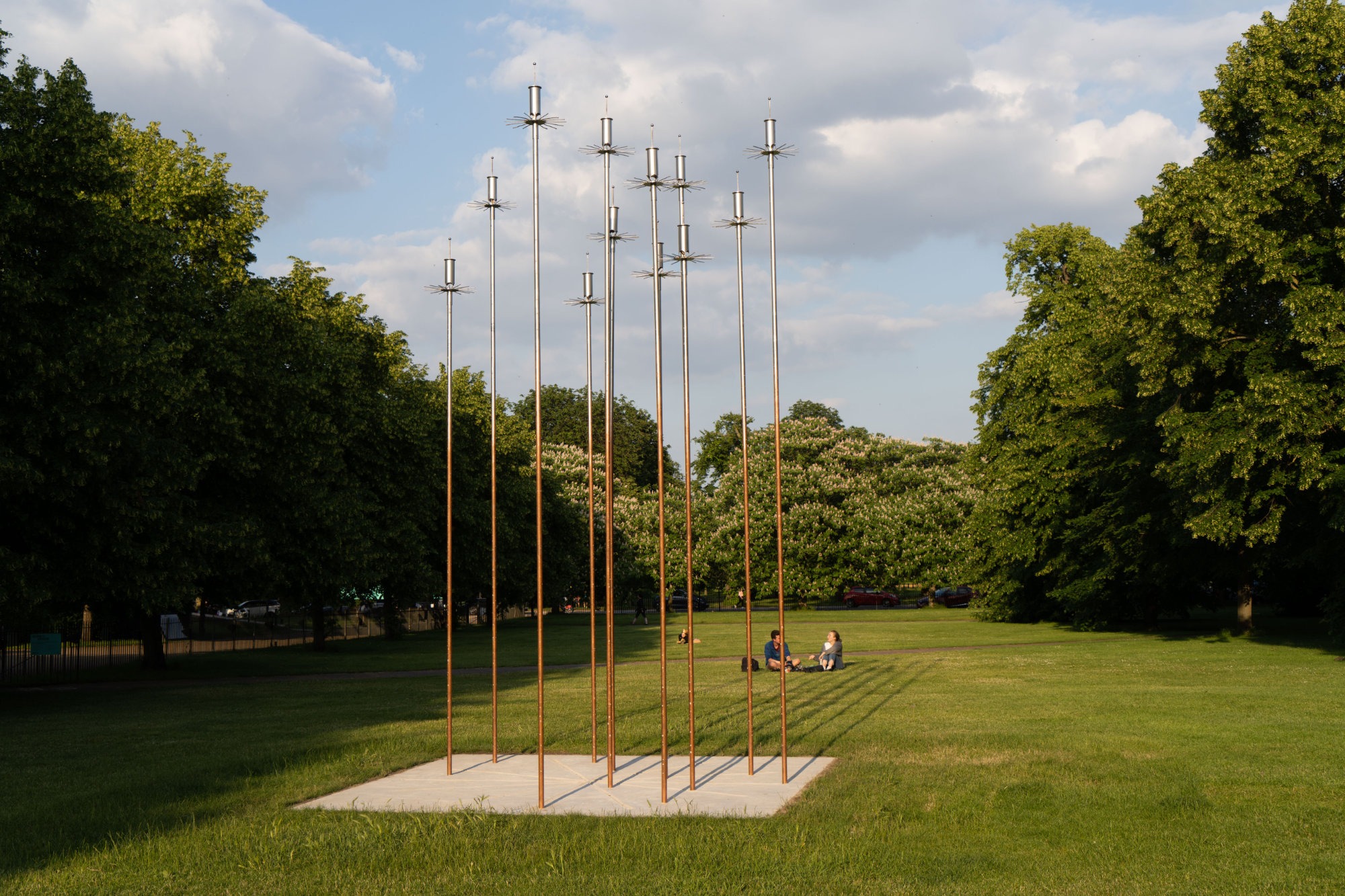 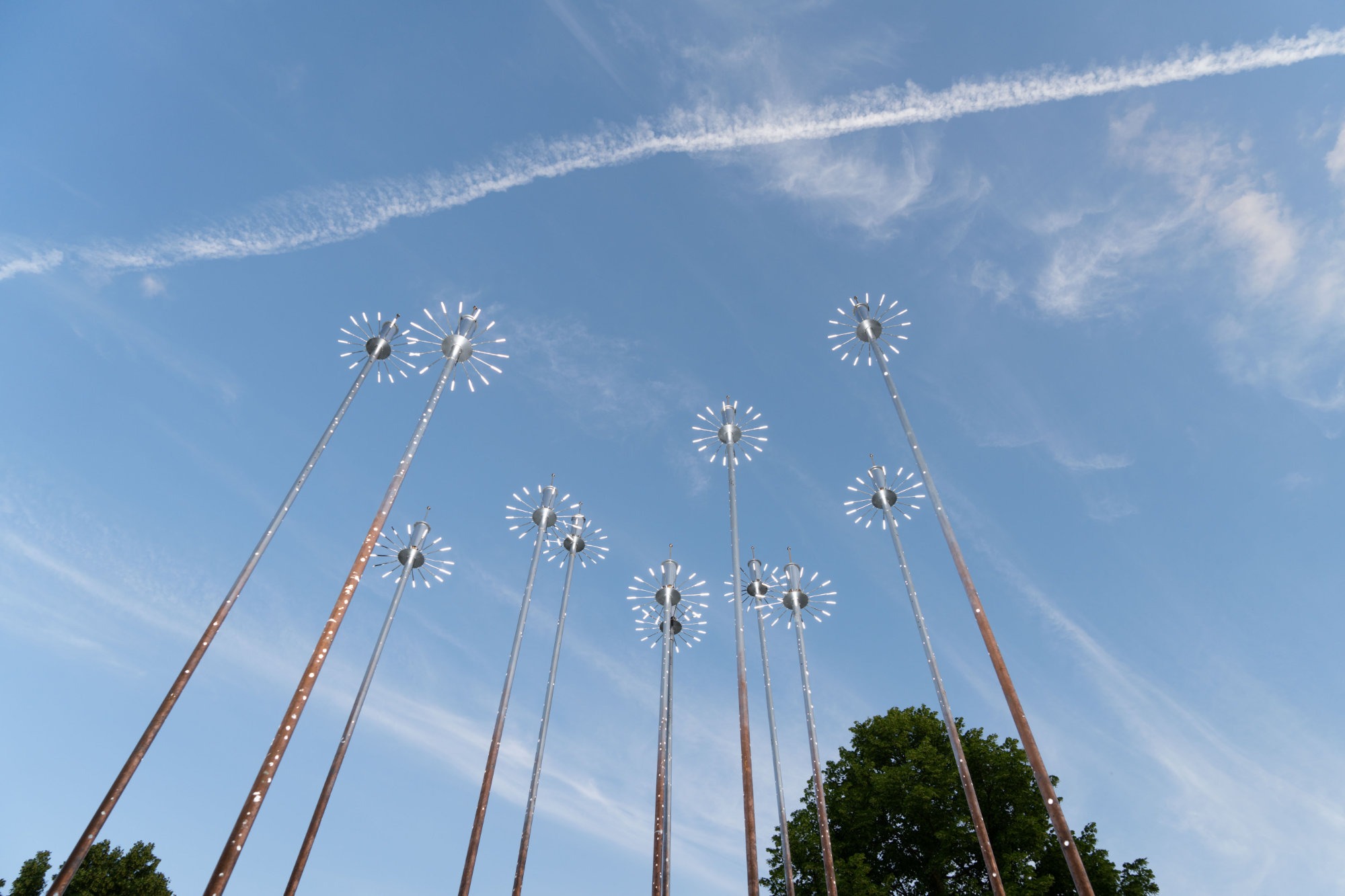 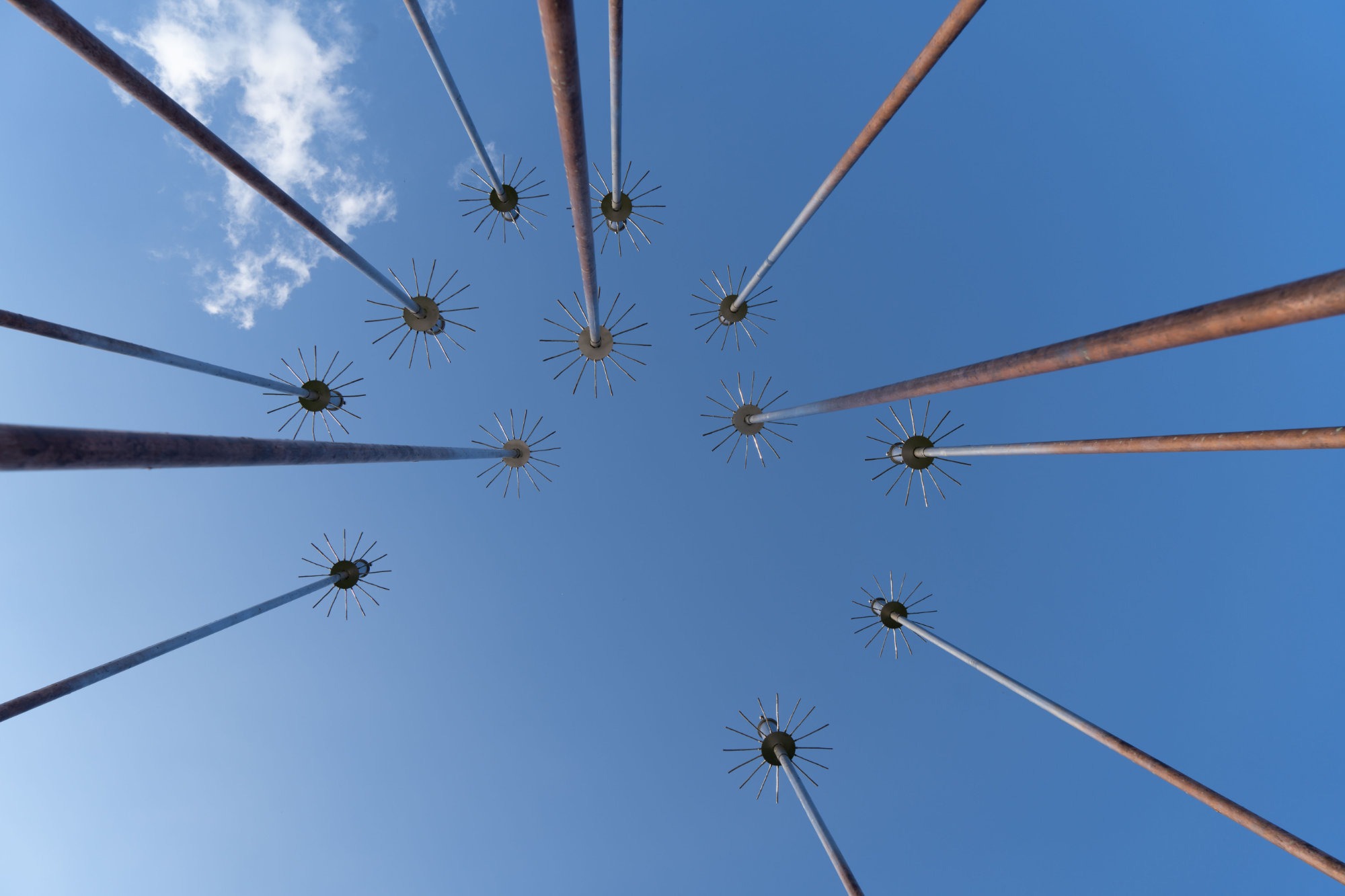 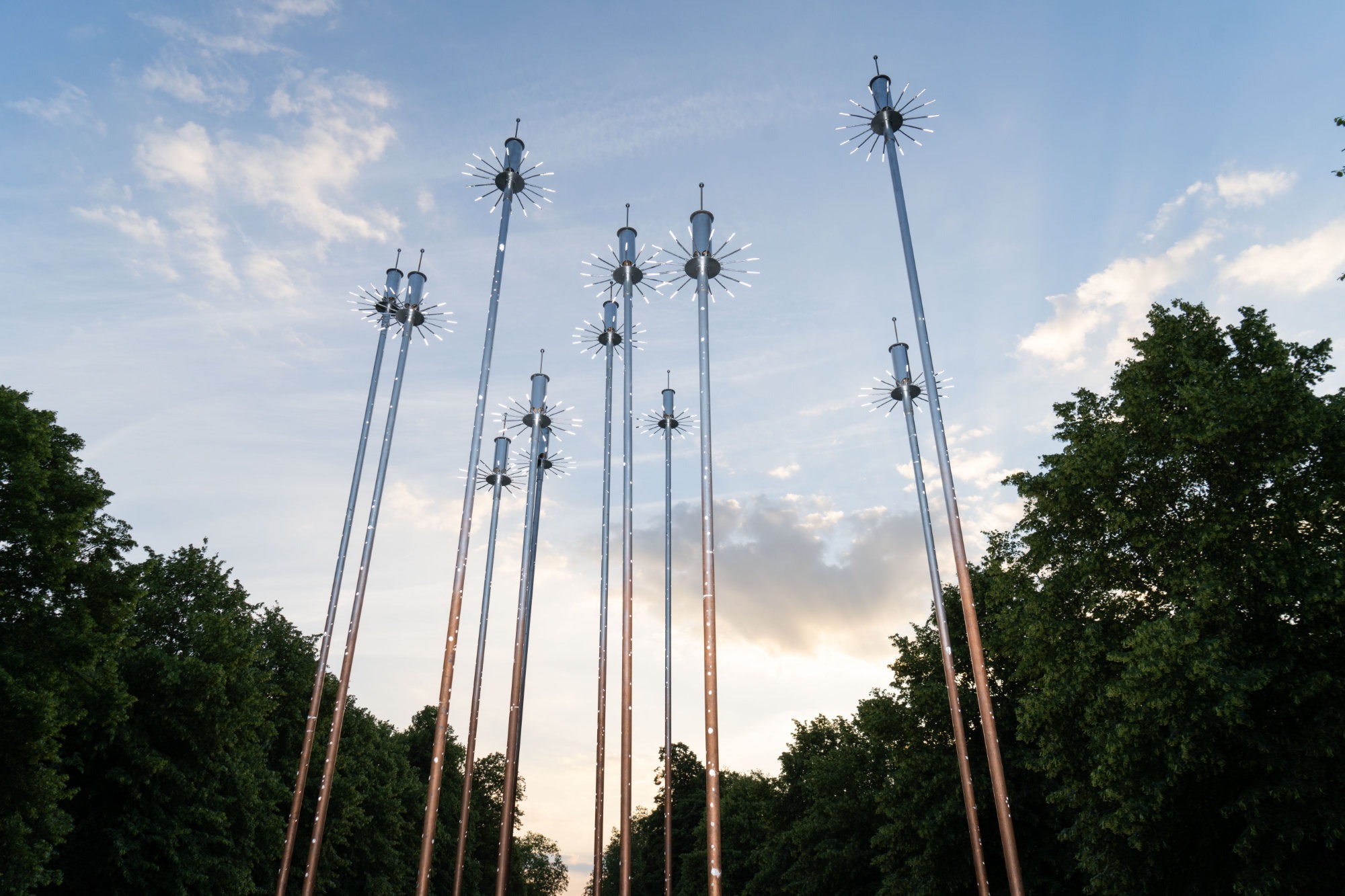 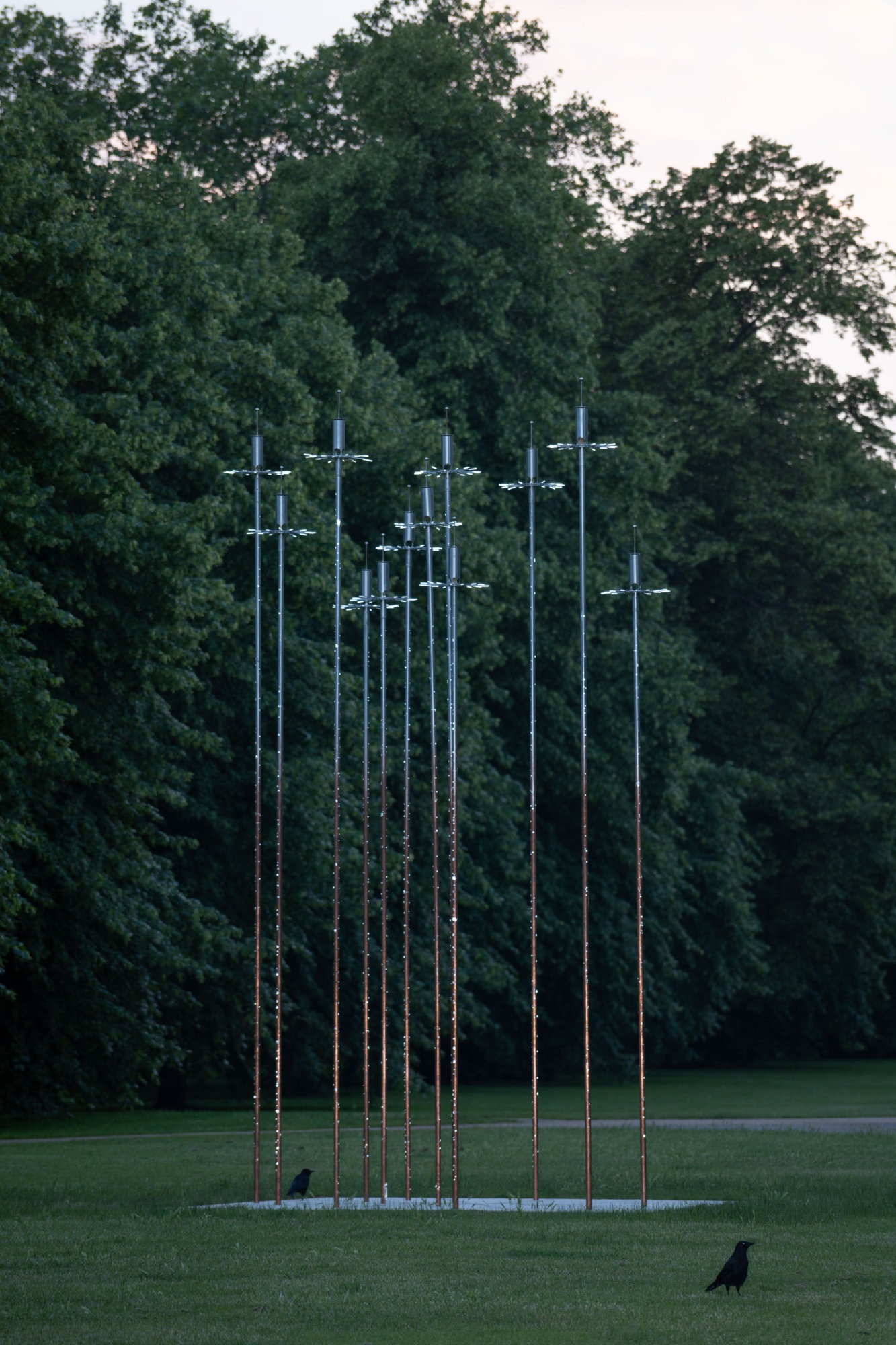 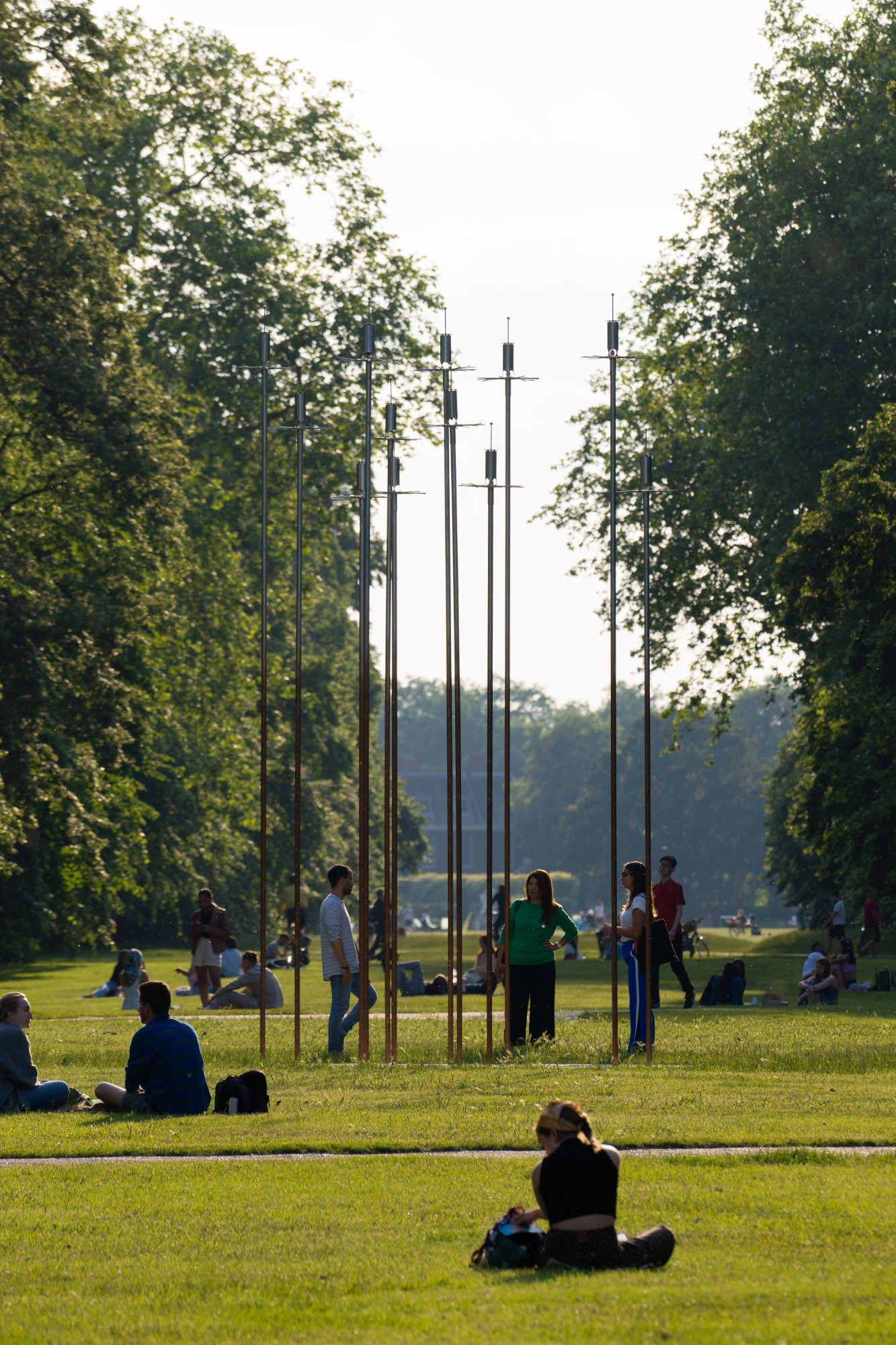 *Every asterisk a star. Every star a clock. Every clock a chime. Every chime a warning. Waking a cell, then a seed, then the germ of a weed getting ready to flower. – Sophia Al-Maria

Sophia Al-Maria considers the dandelion an emblem of freedom and resistance, as each seed has the potential to become an agent of resilience and change. Inspired by the life cycle and geometry of the dandelion (taraxacum officinale), the sculpture taraxos is a model for understanding and listening to the world.

taraxos is a meditative place for anyone to slow down time for themselves. Visitors can sit beneath and stand amongst a constellation of 12 metal achenes, which take the form of futuristic dandelion ‘seeds’, and listen to the sculpture. Activated by the wind, the sculpture can also be played by touching the stems which are covered in copper, a material selected for its antimicrobial qualities.

At the top of each achene the asterisk* appears as shorthand symbolising a dandelion seed’s bracts, below it is inscribed into the ground in reference to the navigational tool of a meteorological wind rose. The punctuation mark of the asterisk* is a motif in Al-Maria’s work which emerged from her screenwriting practice in which the asterisk indicates rewriting and revision. The central node of taraxos is a piece of reclaimed titanium from an airplane. This durable yet light material, ideal for air and space travel mirrors that of the seemingly fragile airborne dandelion seed.

The Serpentine x Modern Forms Sculpture Commission focuses on Serpentine’s immediate environment as a space for artists to engage with the landscape of the park.

taraxos is an ongoing project by Sophia Al-Maria at Serpentine inspired by the dandelion. Initiated in 2019, it continues to pollinate different areas of the programme. On the Winter Solstice in 2020, the project took seed as a meditative audio exercise of breathwork titled tarax’sup?, written and performed by Al-Maria, with a musical score by Kelsey Lu and cover artwork by Tosh Basco (fka boychild). Available online and as a podcast, tarax’sup? can be listened to en route to the sculpture. On the Spring Equinox in 2021 an online text conversation, A Wish Is A Form Of Travel, between Al-Maria and artist Leila Dear considered the sacred geometry of flowers, and included new drawings by Dear.
Visit tarax.live to listen to and read these commissions.

Sophia Al-Maria is a Qatari-American artist who lives in London. Though her work spans many disciplines including drawing, film and screenwriting for TV, it is united by a preoccupation with the power of storytelling and myth, and in particular with imagining revisionist histories and alternative futures. Her work has been exhibited and published internationally and collaboration remains a fundamental principle of her expansive practice. Recent solo exhibitions include Julia Stoschek Collection, Düsseldorf (2020), Tate Britain, London (2019–20) and Whitney Museum of American Art, New York (2016). In 2018, she was the Writer-In-Residence at Whitechapel Gallery, London and she has a forthcoming Garage Museum of Contemporary Art, Moscow (2021). Al-Maria was the co-curator of the Serpentine Miracle Marathon in 2016, participated in the 2014 Extinction and 2015 Transformation Marathons and her films have been screening widely at Serpentine Cinemas and symposia, most recently as part of the General Ecology programme. taraxos is Al-Maria’s first public artwork.
www.serpentinegalleries.org