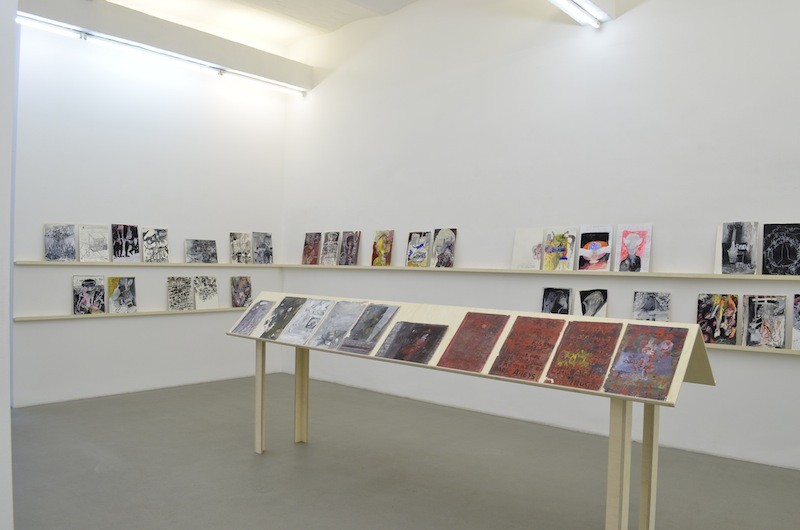 Galerie Sfeir-Semler is happy to announce the opening of Anna Boghiguian, “ZYX – XYZ an autobiography – odd times in life” on Thursday, 25th April 2013 at 7PM in the presence of the artist.

Boghiguian’s work was recently exhibited at dOCUMENTA (13), curated by Carolyn Christov-Bakargiev. Her major installation in the Fridericianum consisted of her drawings and sculptural work, reflective of her sensitive and poetic perspectives on society, politics, and urban life.

Boghiguian’s work was first discovered by Catherine David, who presented her to the world in her project Contemporary Arab Representations, beginning in 2003 in Rotterdam. Attracting much attention and acclaim, her drawings also stirred political debate and controversy, especially in her native Egypt. Boghiguian was born in 1946, an Armenian in Cairo, yet never adopted the city as her home, continuing to have a conflicting relationship with the city today. Living a nomadic life, the artist has constantly moved from city to city across the globe, from Egypt to Canada and India to France. Immersing herself in the sights and sounds of the city, as well as the literature, poetry and politics of its people, the artist nonetheless remained distant, an outsider in a busy metropolis. Her work offers a unique third person yet omniscient view of modern urban communities.

Anna Boghiguian’s works are dense compositions. In them are often text, images, collected photographs and other documentary material closely interwoven. The intense colors and her spontaneous and expressive drawings are reminiscent of diary entries. They seem to visualize and record momentary experience and perception in its various facets.

The gallery will be showing both early and new works. The more recent works focus on the body in its representations of the ear, mouth and eye, as inescapable bases of existence, expression, and perception. The artist repeatedly rearranges and reworks the drawings created on her travels, thus producing an ever-changing series.

Anna Boghiguian studied political science at the American University of Cairo, Egypt and received her BFA in Fine Arts and Music at Concordia University in Montreal, Canada.

She has participated in international group exhibitions such as Contemporary Arab Representation (2003-04) curated by Catherine David, which travelled through various European cities, the 11th Istanbul Biennial curated by WHW, and dOCUMENTA (13). As part of her DAAD scholarship she had a solo show at the daadgalerie, Berlin in March 2013.
www.sfeir-semler.com