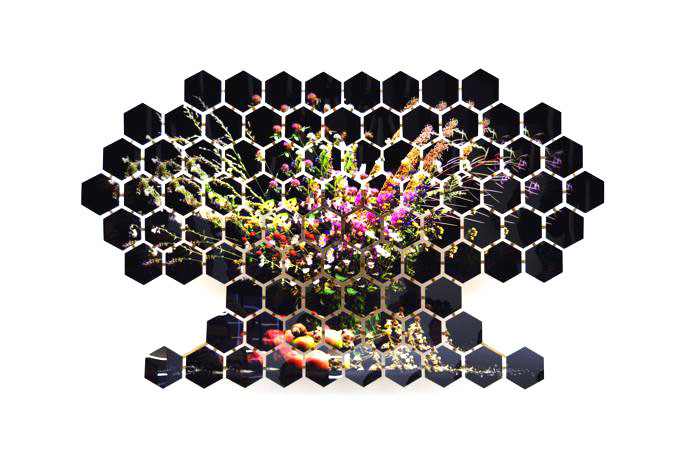 We are delighted to invite you to the opening of the exhibition HIROYUKI MASUYAMA Kaleidoskop on Friday, October 28. 2011 at 7 pm. The exhibition will be on view until Saturday, January 6, 2012.

Over the period of one month Masuyama took a photograph of a bouquet of flowers in front of a dark background every day, documenting the successive stages of decay. Like the lightboxes of his previous works every final image of these photographic still lifes is composed of many single images. The photographs are mounted on one centimeter thick hexagonal wooden plates which are connected though a visible wooden construction. The honeycombed frameworks establish a kind of architecture for the photographs. The resulting still life images are more sculptural pieces than they are classical photographs.

Above all, Masuyama’s work is based on arrangements and structures. Comparable to the Conceptual Art movement of the 60s and 70s, his work includes systematic daily records of the state of objects as well as of his everyday life. Time and space are a key element of his work. Conceptual Art and other artistic movements of that time were focused on the realisation of the idea as an artwork, therefore rendering the classical picture obsolete. However, although Masuyama’s work is based on conceptual strategies, he also creates pictoral objects which explictly refer to the European tradition of painting such as romantic landscape painting or, as on view in this exhibition, the tradition of still life painting.

Each of Masuyama’s still life photographs focus on a single detail. Unlike his previous body of work, his photographs of the flowers are not composed in layers or amalgated together by means of digital image editing. Instead, Masuyama splits them into hexagonal sections and composes a new image with a new temporal sequence. Similarly to a Kaleidoscope which creates a discontinous image, the passage of time is split up and put in to a new order. And yet the compositions are not completely discontinuous; earlier stages of decay are concentrated in the center whereas the almostly completely decayed flowers are located at the edge. The concentration on the center of the image equates to the traditional composition of floral still lifes. At the same time, the fragmentary nature is always evident, signified by the explicitly visible space between the hexagonal sections. Furthermore, the distinct structure of the work is reminiscent of scientific models of molecules. This leads on to another important aspect of Masuyama's work; the idea of microcosms reflecting macrocosms and vice versa.

The new video is an animated self portrait of the artist. It is comprised of photogrpahs the artist took of himself daily, in each photo, holding the photo he took the day before. The effect created is one of being sucked into a depth and of the notion of infinity.

Hiroyuki Masuyama was born in 1968 in Tokyo. From 1989 to 1993 he studied painting at Tokyo University of Fine Arts and Music. In 1995 he was made a fellow of the DAAD at the Kunstakademie Düsseldorf in the class of Magdalena Jetelova. He continued his studies at the Kölner Kunsthochschule für Medien until 2001.

Hiroyuki Masuyama lives and works in Düsseldorf. During summer 2011 he had a solo show at Kunsthalle Gießen. His work “0“, a wooden globe of 260 cm diameter, inside of which thousands of tiny fibre glass lights create a notion of the globe’s firmament, is on view in the exhibition „Wunder“ at Deichtorhallen Hamburg until February, 5th, 2012.
www.sfeir-semler.com