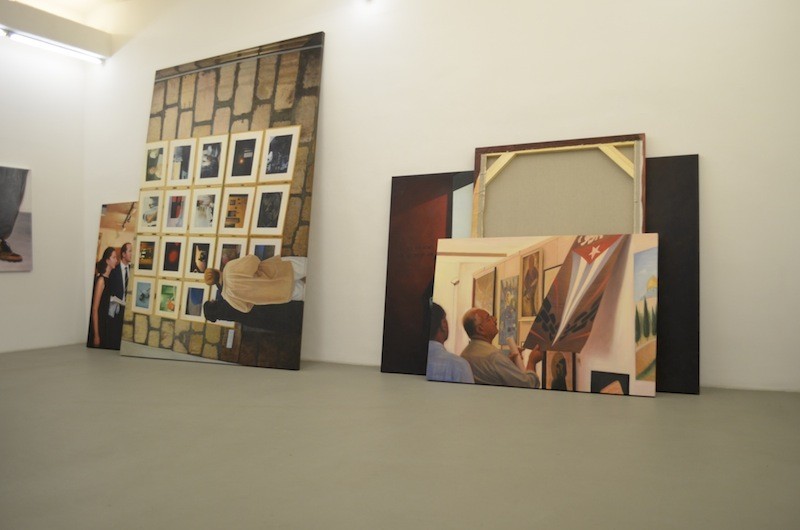 Sfeir-Semler Gallery is pleased to invite you to the first solo exhibition in Germany of Khalil Rabah, Art Exhibition – Ready Made Representation: 1954 – 2010. The show opens on 11th May 2012, 7 - 9 pm, in the presence of the artist.

Khalil Rabah is a Palestinian conceptual artist who works in a wide variety of media. His method can be seen as a form of artistic science that focuses on questioning history and memory, specifically in the context of his native Palestine. Throughout his work, the artist sets cultural and economical standards for Palestine, standards that have long been integral parts of Western national identity, but which are not present in Palestine.

Art Exhibition: Ready Made Representation: 1954-2010 presents a collection of oil paintings which depict art exhibitions. The works are produced in Chinese painting factories, resulting in a disconcerting hyperrealist quality. The paintings are based on photographs either of work by Palestinian artists or of art exhibited in Palestine and were found in newspapers, online, in gallery archives, or were taken by the artist himself. Using this research, Rabah has created a series of work that explores art, exhibition making and, above all, the process of looking at art. Simultaneously, through his focus on Palestinian artists or exhibitions that took place in Palestine, Rabah provides a study of the Palestinian art scene, its history, protagonists, and platforms.

Art Exhibition: Ready Made Representation: 1954- 2010 is part of the artist's long running project The Palestinian Museum of Natural History and Humankind. This fictional museum imagined by the artist first existed in the form of a newsletter. The museum imitates traditional museums and includes departments of palaeontology, geology, botany, anthropology and art. The creation of imagined Palestinian art institutions links to a common theme of Rabah's work, that of the Palestinian people being denied a cultural and national identity, and the institutions which accompany this identity.

Khalil Rabah was born in 1961 in Jerusalem. He studied fine arts at the University of Texas. In 1998 he co-founded the Al Mamal Foundation for Contemporary Art in Jerusalem, an independent institution, which presents, studies, and promotes international art. For several years he has been a lecturere at the Department of Fine Art in Bezalel Academy, Jerusalem. He has participated at major international exhibitions such as the Istanbul Biennale 2005, the Venice Biennale, 2009 and the Sharjah Biennale, 2010. He has had solo exhibitions in Ramallah, Jerusalem, Beirut, Cairo and London.