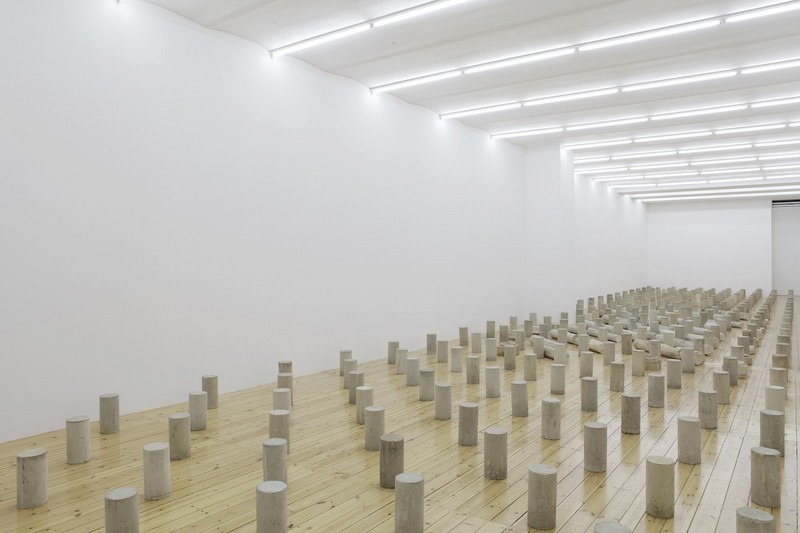 This exhibition is the first show of Tabet’s work in Germany featuring two new sculptures and a wall drawing.

Waiting For A Manifestation is a drawing made on site over the walls of the ground floor gallery. It consists of tally marks drawn in pencil made during the course of the installation period. Tally marks are one of the oldest forms of counting and are a way of keeping tab of a process the end of which cannot be defined. By using this achronic system that crosses time and space, the reference of the tallies drawn opens for interpretation allowing the work to shift between the specific nature of the drawing act and the abstract nature of ascribed meaning.

In the middle of the ground floor space sits Achilles’ Heel; a bench with four knucklebones and a steel shotput. The piece is based on Astragaloi – a game developed in ancient Greece to teach children dexterity – and proposes a version where all the elements are slightly scaled up rendering the play useless and introducing discomfort to the action and the materials.

Colosse Aux Pieds D’Argile a large-scale sculpture composed of marble columns and concrete cylinders transforms the first floor gallery into a field. The columns are reclaimed from a nineteenth century house in Beirut that was clandestinely destroyed by a group of workers to force its reluctant owners to sell it. The cylinders are concrete stress test samples from the skyscraper that was built to replace this house. The work confronts two versions of the same architectural element – the column – acquired from the same site spanning the course of one hundred years of urban development. Both the house and the skyscraper have reflected the ideals of how life should be lived. Both have been extrapolated into ideas of how an environment should be built, un-built or re-built. Each has been used to usher concepts of modernity and each holds within their building blocks the seeds of their own unmaking.

Rayyane Tabet (b. 1983, Ashqout, Lebanon) is an artist who explores the relationship between history and the built environment. His multi-faceted installation often reconstitute the perception of physical and temporal distance. He holds a Bachelor in Architecture from The Cooper Union in New York and a Master in Fine Arts from the University of California in San Diego. His works has been shown at the Stedelijk Museum Bureau in Amsterdam, Centre Georges Pompidou in Paris, Darat al Funun in Amman, and The New Museum in New York. He will be participating in the upcoming Sharjah Biennial 12, opening March 5th 2015.
www.sfeir-semler.com