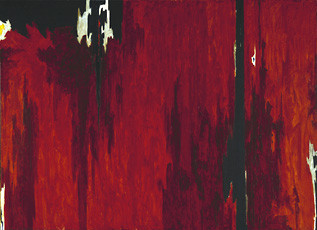 Clyfford Still
Untitled, 1951-1952
oil on canvas
Collection SFMOMA, Gift of the artist; © The Clyfford Still Estate
FOCUS ON ARTISTS
Selections from the Collection

In 1975, convinced that this museum had an exceptional appreciation of his work, artist Clyfford Still made an extremely generous gift of 28 of his own paintings to SFMOMA. As a result, the museum's collection is one of the world's great gatherings of Still's work. SFMOMA, from its early days, has been devoted to fostering close relationships with artists, and these ties have often led to significant holdings of their works. This exhibition looks at SFMOMA's long-term relationships with several modern masters whose iconic works were influential in defining movements from Abstract Expressionism to Postminimalism and beyond. To illustrate the depth of these relationships, individual galleries will feature works by Richard Diebenkorn, Philip Guston, Ellsworth Kelly, Brice Marden, Robert Ryman, Richard Serra, Frank Stella, and, of course, Still. On January 16, the exhibition will double in size to showcase a diverse group of contemporary artists in honor of SFMOMA's 75th anniversary.
www.sfmoma.org