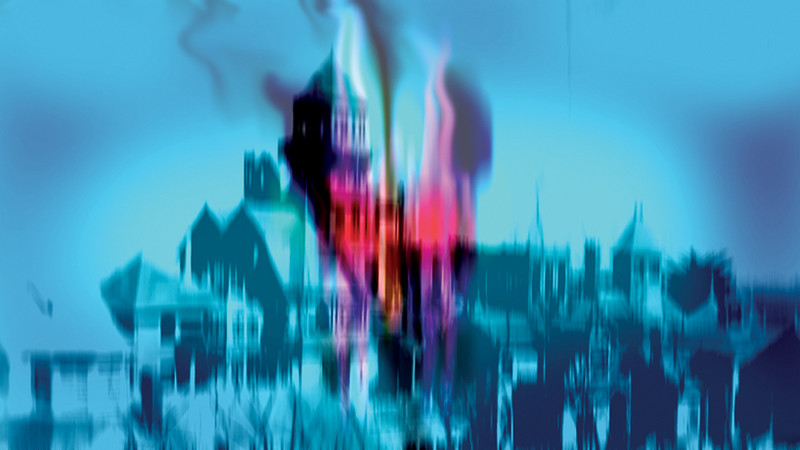 SFMOMA brings national and international artists to the Silicon Valley community of Los Altos in this unique multisite exhibition. Occupying indoor and outdoor locations throughout the downtown area, Project Los Altos features newly commissioned artist projects by Spencer Finch, Christian Jankowski, Chris Johanson, Mike Mills, Kateřina Šedá, Alec Soth, and Jessica Stockholder that respond to the history and culture of this former agricultural area, the local residents, and the sites themselves. These new works are joined by documentation of performances staged by Charles Garoian with his students at Los Altos High School from 1970 to 1983, and Jeremy Blake's opulent Winchester trilogy (2002-2004), from the SFMOMA collection, inspired by the eccentric South Bay mansion built by Sarah Winchester.

Spencer Finch
In Back to Kansas Finch explores the subjective perception of color, particularly in the fading light. The hues in the wall painting are based on details of the vibrant Technicolor scenes from The Wizard of Oz: the red of Dorothy's ruby slippers, the green of the Emerald City. Throughout the day, changes in light alter the appearance of the colors, which fade to gray in the minutes between sunset and dusk.

Charles Garoian
While teaching art at Los Altos High School from 1969 to 1986, Garoian was both developing his own practice as a performance artist and exploring the potential of performance within an art curriculum. Whether putting a fresh twist on familiar rituals like homecoming or exploding the summertime practice of carving watermelons, the performances he staged with his students offer new ways of looking at shared traditions and the ways we use language.

Christian Jankowski
Interested in the ways tech speak has begun to enter daily communication, Jankowski invited a group of Silicon Valley entrepreneurs and thinkers to give talks about everyday topics of their choice using the language of the tech industry. The resulting video installation pairs an array of subjects we know very well with a futurist language we may not know at all, pointing to the ways that art is being created as we talk.

Chris Johanson
A San Jose native, Johanson came of age as part of San Francisco's Mission School — a loosely connected, community-minded group of artists inspired by street and skate culture. With insight and humor, he creates deceptively simple paintings and rough-hewn sculptural environments that serve as armatures for personal, social, and cosmic concerns. For Project Los Altos he has created five outdoor works that reframe their surroundings and prompt reflection on the landscapes around us.

Mike Mills
Mills has created a three-part project that explores the changing cultural landscape of Los Altos through the perspectives of its residents. Embedded in the Costume Bank, the primary fundraiser for the Assistance League of Los Altos, the work celebrates this forty-year-old community mainstay that in many ways stands outside our technology-fueled consumer economy.

Kateřina Šedá
Everything Is Perfect developed from conversations Šedá had with residents of Los Altos and Los Altos Hills. Modeled after the Guinness Book of World Records, this participatory project asks residents to take the suggestions on the wall as inspiration and submit their everyday attributes at 359 State Street or online at www.everythingisperfect.org for consideration as Los Altos World Records. Record holders will be verified by the artist starting in January 2014.

Alec Soth
The twenty photographs in Soth's Silicon Valley form an unexpected portrait that focuses on everyday scenes and experiences rather than the grand narratives of technological innovation and progress so often associated with the region. It was the difficulty of capturing the unseen that originally drew Soth to the area. As he explains: "What is so fascinating about the most recent rush to Silicon Valley is that the harvest is invisible — the gold is in the cloud."

Jessica Stockholder
Stockholder's Cross Hatch visually reconfigures the intersection of Fourth and State Streets. On top of the expected street and crossing markers Stockholder has overlaid painted geometric forms that are fractured and split. Metal bleachers offer a heightened view of the patterned surface and a place to sit and watch pedestrians and cars as they add to the composition. Eventually, the vibrant colors will fade, weathered by the elements and marked up by vehicles and passersby.
www.sfmoma.org