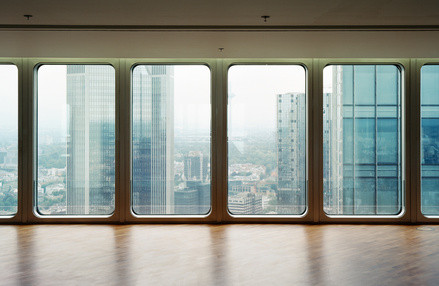 The photographer Matthias Hoch (born 1958 in Radebeul, lives in Leipzig) has documented from 2009-2011 in his project „Silver Tower“ a legendary building in Frankfurt/Main during a time of change.

In 1978, when the skyscraper of the Dresdner Bank was inaugurated in Frankfurt/Main, the aluminium facade and the blunt corners had been considered as the epitome of modern age. Back then, it was with its 166 metres and 32 storeys the tallest building in Germany, employing approximately 2,200 people. After the take-over by the Commerzbank in 2009, the headquarters of the Dresdner Bank was not needed anymore, the building had to be vacated. In his photographies, Matthias Hoch traces the fading trails of the former landmark which used to embody the idea of infinite growth and progress.

The picture cycle of Matthias Hoch generates a dramatic composition of the invisible by pronouncing what “is not anymore” there. The camera keeps the orphaned rooms and traces of use under surveillance. Situations of transition are shown by the pictures and allow us to assume that the end is near. In fact, it is the end of an era. By now, the building has been completely modified, the aura of its original state does not exist anymore, only in memory and in the expression of these pictures it can be found. Matthias Hoch paradigmatically permits the viewer to participate in the revaluation of a vision: modernity becomes history.

The exhibition is linked with further works of the artist and this can be seen, at the same time, in the Kunstmuseum Kloster Unser Lieben Frauen in Magdeburg. On 19th January at 03:00 pm the jointly opening exhibition is taking place.

During the exhibition, there is a catalogue available with all 45 works of the series "Silver Tower", texts written by Harald Kunde, Andreas Maier, Markus Weisbeck. Ed. Harald Kunde, Museum Kurhaus Kleve, ISBN 978-3-944669-01-4, Leipzig: Spector Books, 2013. Deutsch/Englisch. The catalogue is available during the exhibition at special price of 25 €, then 34 € (signed by the artist 40 €).
www.staedtische-galerie-wolfsburg.de