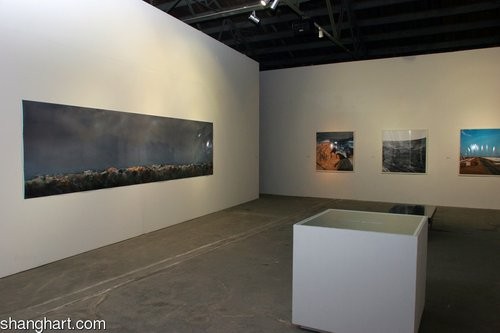 In this month , 《Individual Position 2》 will be held in Shanghart gallery H-space, this is the second part of Shanghart gallery artists group exhibition. The first part of the exhibition was opened to the public in May in bldg 16 by presenting paintings. Then the second part of the exhibition will focus on videos, photographs and installations.
This time, the female artist Liang Yue ’s video “daughter”(2006)will be presented. Liang Yue was born in Shanghai, living and working in Shanghai, Beijing. From 2002 until now, Liang Yue produced five films, in the university, she began to create her own images, These images, very feminine, she also has the unique sensitivity ... Liang Yue hope that delicate female and unique vision observation, She has the eyes of the living, the media is interpreting images.
The artist Xu Zheng was also born in the late 70’s , who will display his new work "18 days" (video)(2006). Xu Zheng’s works are very extensive, including photography, installation and video. And his unique personal experience and China’s social and political posture reflected in it. His works are often very direct use of "physical" -- his own or social -- as his symbolic material.
The artist Yang Zhenzhong will display his new video “Na Xiong Na Er” (2007)this time. He always works with rigorous logic, pays attention to the daily lives of people, and looks for a more extensive expression of the truth. His works reflect the artist for him in connection with the media, such as photography, video, sculpture and installation of special understanding, The thematic artfully blending in the way of performance. Yang is now finished and image indexing, outside the traditional routes, circuitous but questioned all sorts of images produced by the concept. Photography and video, even if it did not consider the digital darkroom or later, also an expression of "I have on the scene," information; the other hand, it is finished for the words "you are here."
Then the artist Zhang Ding is interested in the unnamed individual for the personal stories. Through images, which he crowd visual loss, he often shots those public places in the vicinity of the markers can be seen everywhere.In the second statement by the right people find the lost image of proven process, he stressed uncertainty. Such files like precision for the display memory, and lose interest in the personal narrative. Thus, in this exhibition his new "Crazy man" will on display.
In the photo part, we will present Hu Jieming, Li Qing, "bird’s head", Lu Chunsheng, Liu Weijian, Yang Fudong, Shiqing and other artists’ new photography works. Among the artists, Hu Jieming now is one of the digital media and video devices pioneer artists. He was concerned about the genre is a mixture of old and new changes : an ongoing point he questioned and the theme of many media, regardless of photography, video, or digital interactive technology, and home construction and featuring music notes.
Yang Fudong, who has become after 89 video artists in the crowd, with a beautiful and sentimental images records in a fast-changing society urban intellectuals and young people feel alienated.
Compared with Yang Fudong, artists Lu Chunsheng, is super-realism and neutral and objective attitude in dealing with the integration into the works. Spot shooting, and unlimited extension of the footage, as well as non-professional technical crew, He recorded in some unusual cases of human behavior. But many other artists with different era, he did not concern the urbanization process because of the sense of alienation, including the highly mobile crowd, and the loss of residents, Conversely, the development of his own works - both photographic and video - is to find their own strange but no doubt different position.
Cloak of new media styles, artists Shi Qing for a rally and they were created by the intersection of jealousy : In technology harboring a curse and taboos, the body is being watched with the energy released by the abyss, also waiting to be polluted and disinfection species. The human body from the religious and witchcraft were walked through the ceremony to become pure evil and the historical archives, And it is also the reading of this file with the well explained.
"Bird’s head", together with Liu Wei are the young artists who was born after 80’s, They used their camera lens to do a record of nowadays’ real life.
At last, the installation, Shi Qing’s works "bicycle" and the "electic to control emotion" device also will present in this exhibition.
www.shanghartgallery.com