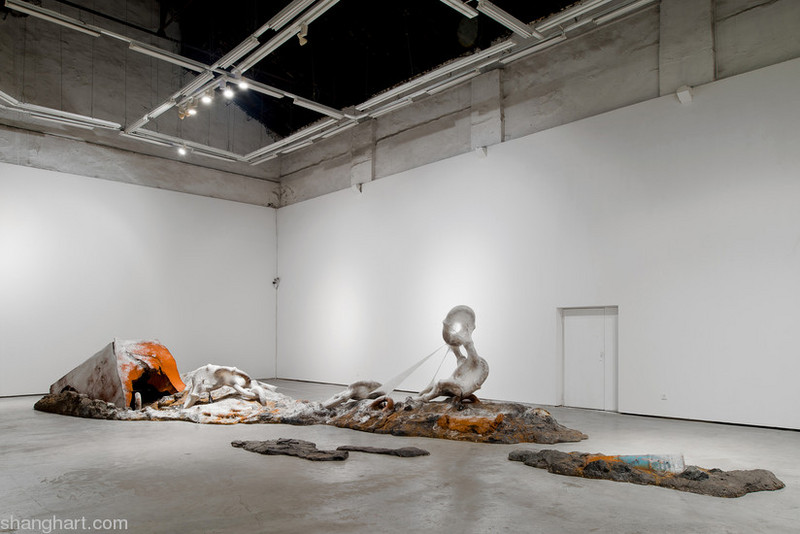 ShanghART is so pleased to present LIANG Shaoji’s solo exhibition in ShanghART main space& H-Space from Sept 27 to Oct 26, 2014.
Residing in the mountainous area of middle Zhejiang Province since 25 years, LIANG Shaoji takes the entire life cycle of the silkworm as the media, characterizes by the interaction with nature, explores at the critical point of art and science, sculpture and installation, performance and multimedia, approaching the ultimate inquiry of both time and life.

On September 26, 2014, Shanghart Gallery will unveil the new face of the “Nature Series” created in the past 5 years by LIANG Shaoji, who is honored as “The hermit of Chinese contemporary art”. This is a selection of artworks simple and powerful contains the co-existence opposite of dynamic and still, hardness and softness, darkness and illusion, faces the presence, shuttles between heaven and hell. The exhibition is titled Back to Origin (Yuan in Chinese), which means original, basic, genetic, element. In rhetoric of classic Chinese, Yuan is interchangeable with Garden, which embodies nirvana. It’s obviously that the artist intends to open a space that is larger, more abstract, more rational and purer. In the way return to innocence of “homecoming” and “estimating”, he regards the silkworm as Unified Yuan, and said: “the silk, for me, is the image of the end of both time and life during their long and stretching journey, the indication of existence and existent, draws the unification both infinity and infinitesimal.

The exhibition divides the two spaces into dynamics and still. The large-scale installation, Destiny, uncovers a sundering hellish scene that the huge iron chains are drilling in the swampy mud who is confronted by the small creatures that desperate struggle and twining the silk. The black petroleum leaking from the chains forms a strong contrast with defuse silver silk, brings the audience into meditation. Differing from Destiny, Pitfall and Nowhere to Hide, the context of the installations A Move in Silence, Sound of Heart, Snow Cover, Planar Tunnel, Stele and Mending Sky (video) reveal deep meaning of Zen.

Non-pointer clock, soundless Qing (a Chinese instrument), unlettered stele, translucent silk planar, broken blue sky, and the silk porcelain on the pristine snow...It is as if the universe were suddenly still, but restarted by the hatch of silk. The “silk cloud” is the metaphorical element that has frequently appeared in LIANG Shaoji’s works, and this time, it will turn into frozen and home-therapy snow. It is most compelling that the perfect combination of silk and crackled porcelain which is covered by snow, creating a broad and pure field of creatures and history. This kind of silence is the inevitable consequence of the long period residence in Tiantai Mountain, inspiring by Samatha-Vipassana and Ultimate silence, and life experience.
www.shanghartgallery.com