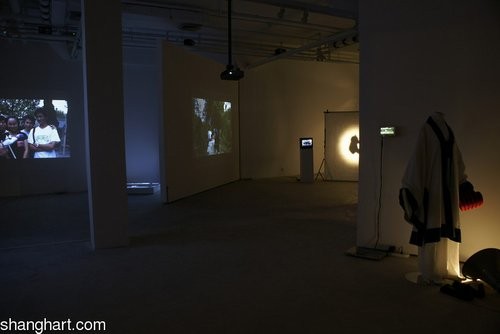 Shanghart Gallery F- Space will officially open to the public on the occasion of Shi Qing’s new project “When Zhuge Liang Meets Pandas” from September 2nd to October 5th, 2007.
The name “F” Space was chosen according to the fact that it is the “fifth” space of ShanghArt gallery since its establishment and that it is close to the Fudan University as well. F- Space aims in promoting emerging, experimental and academic contemporary art. Therefore, F-Space invited Shi Qing, important creative and experimental artist, to exhibit his new project for the grand opening of the space.
Shi Qing, born in 1969 in Inner Mongolia, lives and works in Beijing. He began to produce experimental artworks in 1999. Through the realization of installations, performances, photography, videos, and new medias he created his own artistic language system. He also uses theatrical methods to probe and reveal various themes as well as the symbolic nature of common consciousness and mythic narration. The social character of his work is emphasized since 2005 as he started to focus his creation on the city as an entity and historical researches. His works have been shown in many important exhibitions in China and abroad. Main solo exhibitions: 2006 “Electricity”, Bizart Art Center, Shanghai, China, 2003 “Black Taboo”, 25000 Cultural Transmission Center, Beijing, China; Main group exhibitions: 2005 Prague International Biennale of Contemporary Art, National Gallery Prague, Czech, 2004 Busan Biennale 2004 Contemporary Art Exhibition, Busan Metropolitan Art Museum, Busan, Korea, series exhibition of ““Post-Sense Sensibility” etc.
For this exhibition, Shi Qing used historical imagination to create a new project: referring to his personal consciousness and experience as an artist, he involved himself in a historical event. Through the analysis of the culture, the geography and the ecology of the famous historical city “Hanzhong” in the Northwest of China, he juxtaposed the local historical and cultural scene of Zhuge Liang with the colonial history of the discovery of panda. His new project, presented under the form of videos, documents and props, display the conflict and deadlock between symbols of global consumption culture and local cultural system.
www.shanghartgallery.com