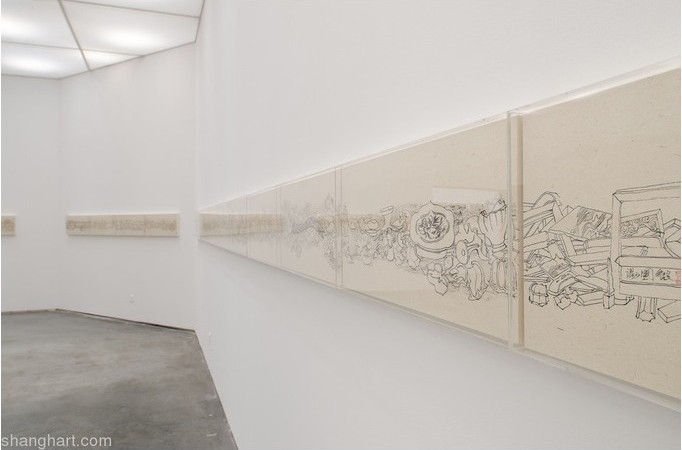 ShanghART is pleased to present the first solo exhibition in this season, “The Rhymes of Ruins: TANG Guo Solo Exhibition”. Highly recommended by M50 joint openings, this exhibition will be shown in ShanghART main space from May 11th through June 10th, 2013.

Five years have passed since TANG Guo had his last solo exhibition, while his creative inspiration seems to stay the same. In his early years, the inspiration was mainly from his obsession with handmade paper using traditional techniques; then in “Shui Kou (Water Source)”, it was from the temperament of river characterized by its placidity yet tenacity, haziness and elusiveness; later in “Human Territory” it was manifested as the immortal figures flying against the wind; and now his latest video work “The Rhymes of Ruins” once again returns to the unforgettable memory of overwhelming flood of water. The work is done in the form of stop motion animation derived from black and white photography, featuring a composition of natural materials, such as dead branches and dry leaves. Though succinct in form, the effect is astonishing and far-reaching, as if it were stretching into endless reincarnation. Dubbed by the artist himself, the work reveals mixed feelings of sorrow, grace, casualness and discontent, being resentful while at the same time admirable, with the intermittent blanks enhancing the impression of a perpetual struggle in the hope of nirvana. This exhibition will also feature TANG’s latest paper works, which stand as a resourceful book depicting the fine virtue of frozen ruins.

Contents in Fine Sketches for Teaching derive from scenes I witnessed in person.
Capturing ghosts in those spaces and painterly fixing them on paper is a constant work over the years.
The ghosts span a wide range, varying from pottery to porcelain, from seating to bedding, from farmyard to study and desk, from bracket set to beam frame.
As well as basket, bucket, pavilion, porch, tea pot, bowl, dish, jar, flower, and rockery.
Be it practical or not, for man or for god, rough or delicate, rare or rotten.
A sense of paleness asserts itself by virtue of passion piled by civilization and bone shards from frenzy scenes.
Deeply immersed in the ruins of bleak village and deserted temple, I am here to discover fleeting moments from history of time.
“The Rhyme of Ruins” originates from the flood I experienced before. By the last moment of the flood befalling, fowls, snakes, scorpions and insects all incredibly have instinctively revealed a sense of calmness and detachment. The background sound of “WU WU WU” “O O O” is simple in form, but conveys different meanings, which seems to hate as well as to miss, to weep as well as to talk. Paused blank is like a dancing dragon, the lonely man in the small boat is moved to tears, it is the scene in Former Fu on Red Cliff. Perpetual struggle runs through the work, for the small boat disappeared and reappeared. The work is made of natural materials, such as dead branches and dead leaves. I dubbed the video using a traditional style of chanting, Xiao Ge, to express complex emotions of casualness and discontent. Xiao Ge is very popular in Wei Jin period, it means expressing one’s bottom thoughts, without caring worldly opinions. And here my small boat “float freely in the sky, not knowing where to land; it is so tiny in the grand sky, abandoning secular world for being immortal in heaven”. In the end, wind dwindles, fire dies out, phoenix nirvana, and everything starts anew.

As to my works on show today, comments are warmly welcomed.