How Should I Explain to You 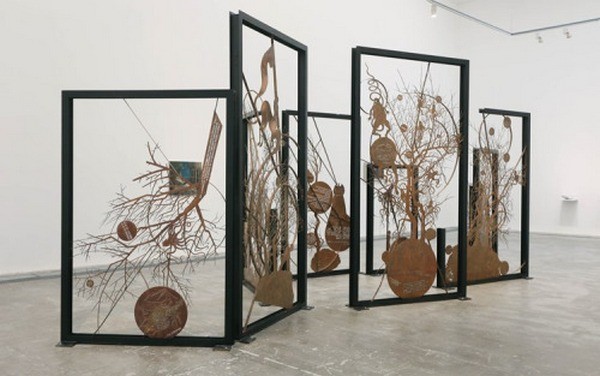 ShanghART Beijing is pleased to present the artists group exhibition How should I explain to you on 25th June, 2016.

"Language and text" are regarded as the main clue of this group exhibition. Painting, installation, video and photograph will be presented by 9 artists.

As "Language and text" are the important ways of culture carrying and recording, it is always showed in artists' works in different forms, such as Xu Zhen/MadeIn Metal language series in this exhibition. The work collects words from popular political caricatures. The periphery of the graffiti-like text is tightly circled by another long-chain, and the letters that appear to be roaring are thus inserted into a neat dialogue box, the puzzling weird text in format of all capital letters, which frequently appear in English comic. It spells out independent and yet vivid phrases with metal chains, thereby fully developing the tactility of thought. And also Chen Xiaoyun's big installation work Emerald Tablet series, the title, Emerald Tablet, relates to a text with 13 proverbs in 1900 BC which purporting to reveal the secret of the primordial substance and its transmutations. It claims to be the work of Hermes Trismegistus ("Hermes the Thrice-Great"), a legendary Egyptian sage or god, variously identified with the Egyptian god Thoth and/or the Greek god Hermes, and the proverbs was worshipped by ancient alchemists. Chen Xiaoyun speaks his mind carefully with metaphors and scenarios, and documents the daily-looking scenes that perhaps will reset your view to the daily life. In addition, this exhibition will show the artist Geng Jianyi's Ten Seconds Immersion series, Shen Fan's Punctuation series, and Jiang Pengyi, Liang Yue, Sun Xun, Wu Yiming, and Zhao Yang’s works.
www.shanghartgallery.com