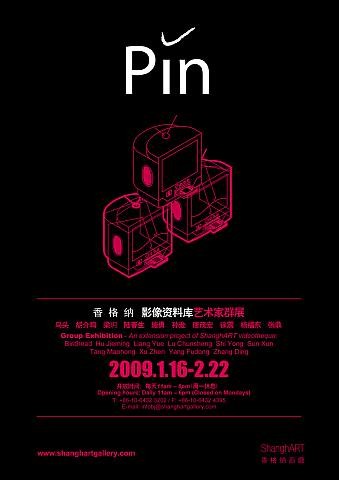 PIN - group exhibition, as an extension of the ShanghART Videotheque project which was launched last September, will be the first show to be presented in ShanghART Beijing space in 2009.

In Chinese writing, the character of PIN is composed of 3 squares (one on the mid-top and two at the bottom), which visualizes three old television in the center of the exhibition hall. At ‘PIN’, visitors are free to select video works from our exclusive list to play. While watching ‘PIN’, visitors also can appreciate some derivative works from artists’ video works around the hall walls.

Moreover, ShanghART Beijing will launch ‘Artists Video Week’ from mid-February, and hold a series of events. Artist Sun Xun will be our first guest to be present and introduce his works to audiences at relevant lectures. His 2009 solo exhibition will be held in our H-Space in Shanghai at the same time. Further information is available on our gallery website.

The main oeuvre of Sun Xun’s works is consisted of a series of highly interrogative and impressive animated films in black and white, in which he explores how history is constructed and narrated. His selected works ‘Shock of Time’ (2006) reveal the artist's views on time, story and history. With the materials of old newspaper and publications in 50's and 60's, and based on the published information(news, articles, etc) in China then, he now questioned the history once to be true.

Tang Maohong integrated a large number of vision elements and hot topics, and produced the works exist in the fuzzy boundary between high art and popular culture. A series of factors such as absurdity, magic, humour, and confrontation coexist in his works. His selected works ‘Orchid Finger’ (2005) series are full of wisdom and wit, weirdness and ridiculousness. Framed in a round traditional Chinese bird and flower paintings, interactional humans, animals and plants are assembled for plain carnivals. Rich imagination, exaggerated style, and unique humour clearly depict a surreal world.

Yang Fudong’s films and photographs accumulated and combined multiple perspectives, and he unified ancient myth, personal memory and living experience. Unique annotation is formed due to incompleteness and uncertainty of his works. His selected video ‘No Snow on the Broken Bridge’ (2006), seven young men and women are all eager to see the final snow view at the broken bridge; and the appearance of rabbit, parrot, and goat imply a coxcombical and vain age.

Zhang Ding’s past works were mainly concerned about those people, events, and objects at marginal urban culture in a subjective way of naturalism. Through his perspectives, we explore a bustling city where true details exist but are easily neglected, in which gloom, dilapidation, chaos, and miracle are vividly exposed. In the selected work ‘Great Era’ (2007), the protagonist is wandering alone with his horse-bike in Shanghai as a stage background.