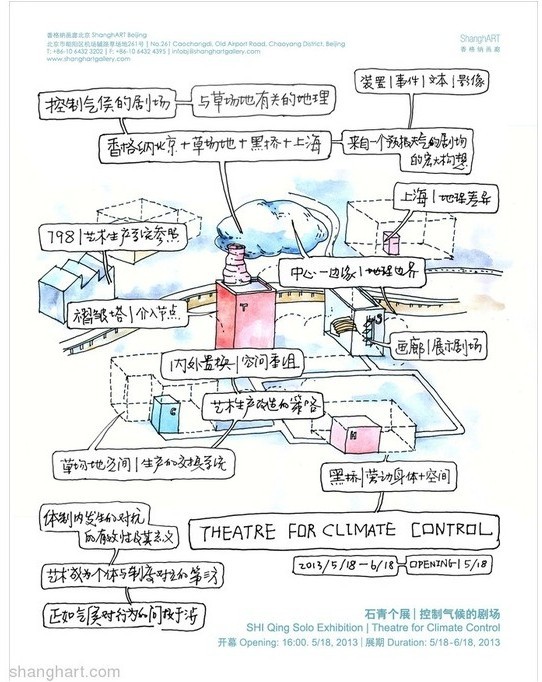 The concept of “Climate Theatre” originated from a crazy plan about weather forecasting envisaged by Lewis Fry Richardson, a British scientist during the First World War. Shielded inside a theatre-like structure, global weather could be instantly computed and analysed from the data of more than sixty thousand people. Usually,“climate” is used metaphorically as a synonym for complexity and uncertainty, the exact qualities in contemporary art system to be rediscovered and reactivated in this project. SHI Qing attempts to put “climate” as a third party or unexpected conflicts introduced into his project, which is penetrated and internalised into the entire practice. Corresponding to such climate, “terrain”, namely the microenvironment of Cao Chang Di,is treated as both subject and context of observation and interposition and interacts with the organisation and reproduction of regional spaces.The purpose of this project is not to get the models of live or fictional participation,but constantly emphasis on the mechanism for action involving with an outsider and the tripartite partnership among action,living space and art producing.“Climate” in living environments is both rhetorical and practical.
This new project will be on view at 4 p.m. on 18th May, 2013 in ShanghART Beijing and runs until 18th June. Additionally, it will be preluded by a string of practice in form of art events in Cao Chang Di and surrounding areas. What we see in galleries’ presentation are normally only some parts of the entire art producing, whereas the complexity in art lies in art’s conflicts with systems and art itself.