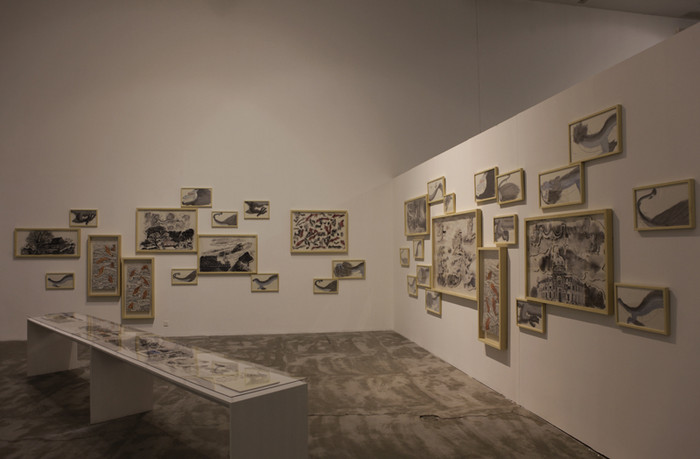 “Beyond-ism” was inspired by the artist in residence project in Yokohama, and the work consists of three parts. The first part, which consists of 10 huge ink drawings and frames of animation video, was realized in Yokohama. The second part, the drawings for the animation, was completed in Beijing, and the work was firstly exhibited at Aichi Triennale 2010 in Japan. The third part, hand-drawn renderings and video, was exhibited at Rockbund Museum in Shanghai. The whole process is combined with a site-specific drawing.

There is an old Chinese legend that says the Emperor Qin Shi Huang (258 BC – 210 BC, he was the first emperor of a unified China – Qin Dynasty) sent Xu Fu (served as a court sorcerer in Qin Dynasty) and 3,000 boys and girls on a boat towards Fairyland Penglai in the east in order to find the elixir of life. It is said that these people may have arrived in Japan in the end... In ancient China, people then had one understanding of the world. It says the world is a big mountain, which is carried on the back of a big tortoise whose name is “Bi Xi”, the eldest of the Dragon’s 9 sons, who is very good in carrying heavy weights whilst standing over four big elephants... This is the way the world has been structured.

Sun Xun’s works are predominantly monochromatic, highly detailed hand-drawn animation films. His works investigate the construction and narration of history. Like most of Sun Xun’s recent animations, “Beyond-ism” also features a key protagonist; a magician dressed in a black suit and a high top hat. As the only legitimate liar, he coined the most beautiful myth in the world, which is a misty mirage, but turns the whole world upside down. Everything is a romantic wasteland, and in these ruins will there be some long-awaited glory? Or should we divulge these lies or glories by turning themselves upside down?

Will the original appearance be restored if the so-called “-ism” is pulled away? Without “-ism”, what will life be like?

Sun Xun (1980) was born in Fuxin in Liaoning province. He graduated from the Print-making Department of the China Academy of Fine Arts in 2005, and established “π” Animation Studio in 2006. In 2010, Sun Xun finished his recent animation film “21KE” (21 Grams), and had its world premiere at the new “Orizzonti” section at the 67th Venice International Film Festival. This was the first Chinese animation film premiered at the Venice Film Festival. During 2010, Sun Xun has received several notable awards including “Chinese Contemporary Art Awards (CCAA Best Young Artist)” and “Taiwan Contemporary Art Link Young Art Award”.