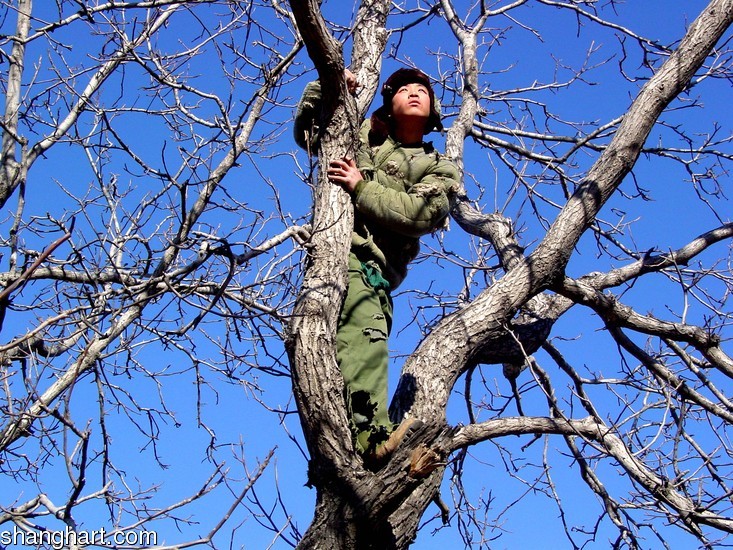 ShanghART is pleased to announce Close to the Sea · The Revival of the Snake - YANG Fudong Solo Exhibition will be on view from 12th May to 15th June 2012 in ShanghART Beijing and ARTMIA Gallery. This show will be Yang Fudong’s first Beijing solo show and the premiere of the works in China.

Close to the Sea (2004)
In this ten-channel video installation, a concert is being staged at the seaside. Accompanied by various musical instruments, the love story of a young couple is unfolded on the same location. The videos set on the centre display two scenarios taking place simultaneously: one shows a young couple riding a horse along the sea and the other a pair of lovers struggling for survival from a ship accident. The other eight screens deliver at the same time the performance of diverse instruments, a trumpet and a cello played on the rocks, for example. The background music, which is hallucinatory, dreamlike and even uncoordinated, reflects the conflicts between ideals and reality. The young lovers, despite the threat of death, continue with their discussion of ideal, faith and anticipation.

The Revival of the Snake (2005)
This work tells the end of the story of a soldier going into exile. On a sunny winter's day, the icy ground is stared with snow and life seems as peaceful as the weather. A soldier, escaping from a battlefield, comes to this deserted place which is plagued with the smell of death. He is wandering, attempting to leave this uninhabited world. The only option left to him, however, is walking, ceaselessly and endlessly. What is waiting for him? A hibernating snake is startled awake from its nice dreams and then sees a human, eyes blindfolded and hands bound on the back, kneeling on the freezing ice-covered lake. Who is sentenced to death by the sound of gunshots reverberating around the mountains?

YANG Fudong was born in 1971 in Beijing and trained as a painter at China Academy of Art between 1991 and 1995, and then later in the Department of Photography there, as well as the Film Academy Beijing in 1996. Starting in the late 1990s, he embarked on a career in the mediums of film and video and is among the most successful and influential Chinese artists today.