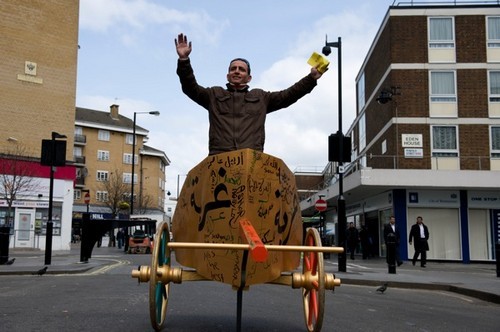 7pm: Chicago Boys: While we were singing, they were dreaming...

An informal evening of music and discussion by Chicago Boys: While we were singing, they were dreaming, a 1970s revival band and neo-liberalism study group assembled by artist Hiwa K. Following from performances at a café on the Edgware Road in April, the band will play popular music from Iran, Iraq and Lebanon in the 1970s, followed by conversations about personal memories and the shaping of the region by neo-liberal policies.

Estrangement is an ongoing project initiated by Polish curator and artistic director of Wyspa Institute of Art, Aneta Szylak and Iraqi-Kurdish artist Hiwa K. Estrangement is a curatorial and educational enterprise outside of one’s familiar context or within the context to which one does not belong.

Involving artists from both Europe and the Middle East through international residencies, research and projects, Estrangement seeks ways to rethink cultures of representation as well as create a space for intimate and individual encounters. Estrangement is a proposal situated in improvised space where a minuscule series of affects, may they be epiphanies or frustrations, is made possible. At The Showroom, Estrangement presents works and contextual material gathered from its earlier incarnations, alongside two new commissions by Hiwa K and Polish artist Joanna Rajkowska following their residencies in the Church Street neighbourhood and Edgware Road areas.

Hiwa K is collaborating with Jim White, a former American soldier and now a caretaker at a German art academy, on a live ten-minute performance simulating Ennio Morricone’s score for the final duel scene of Sergio Leone’s spaghetti Western Once Upon A Time In The West. The work is an enquiry into the redistribution of dominant cultural representations and competences. Hiwa K and Jim White – who was taught to play country guitar music by the artist - will perform the work with Zone One Brass at the Cockpit Theatre on 20 April 2010, 8pm.

Rajkowska’s project refers to the history of Edgware Road as an ancient thoroughfare and since XIX century a place where migrants from Middle East
settle. Her proposal is a vehicle: a chariot, decorated in collaboration with the Edgware Road community, which will be driven in the streets surrounding the gallery on 20 April 2010, 12-2pm. Chariots are refined ancient war machines that
originated from Central Asia but were in use longest in Britain. The piece explores the Middle Eastern origins of this vehicle whilst considering ideas of destination, arrival and circulation of cultural forms.

The project is an outcome of the partnership between The Showroom and Wyspa Institute of Art. Hiwa
K’s residency is organised in collaboration with the Serpentine Gallery, and Joanna Rajkowska’s project is part of POLSKA! YEAR. With additional thanks to The Delfina Foundation. Additional financial support for the project has been provided by Adam Mickiewicz Institute, the Polish Cultural Institute and Goethe
Institut. Research funding for Aneta Szylak and Hiwa K has been provided by American Center Foundation, European Cultural Foundation, ifa and Platform Garanti.