If it didn't exist you'd have to invent it 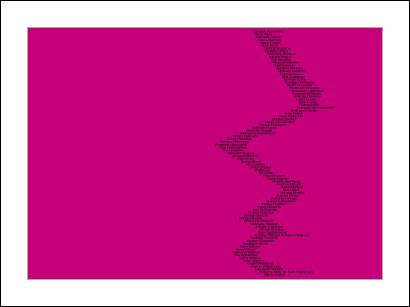 If it didn't exist you'd have to invent it: a partial Showroom history

If it didn't exist you'd have to invent it: a partial Showroom history brings together work by over eighty artists who have exhibited at the gallery between 1990 and 2006. Researching back through the archives to a period before electronic communication and computer files, the curatorial team have been tracking down as many artists as possible whose careers started at The Showroom.
We are delighted to announce that If it didn't exist you'd have to invent it: a partial Showroom history will include work by internationally recognised artists such as Simon Starling, Jim Lambie, Mona Hatoum, Eugenio Dittborn, Francis Cape, Sam Taylor-Wood, Douglas Gordon, Christine Borland, Martin Boyce, Nathan Coley, Graham Gussin, Ceal Floyer, Keith Coventry, Rebecca Warren, desperate optimists, Anya Gallaccio, Fortuyn/O'Brien, SMITH/STEWART, Forced Entertainment, Alan Michael, Cathy Wilkes, Joanne Tatham & Tom O'Sullivan, Chris Evans, Claire Barclay, Eva Rothschild, Zinny & Maidagan, Des Hughes, Richard Hughes, Daria Martin, Subodh Gupta, Kathrin Böhm, Aaron Williamson and juneau/projects/. Thus demonstrating the important role that The Showroom has played in supporting artists at an early career stage, and in shaping emerging tendencies.
If it didn't exist... will provide a uniquely eclectic overview of the last sixteen years of contemporary art practice and reflect the programming of the three directors: David Thorp, Kim Sweet and Kirsty Ogg. The show will also provide an exciting opportunity to snap up a piece of cutting edge contemporary art, as works will be for sale through the gallery.
The exhibition also marks an important moment in The Showroom's history: it is the last exhibition to take place on site before the gallery closes for refurbishment. The Showroom will re-launch in January 2007 in a newly improved space designed by the innovative architectural practice Harty + Harty, who have worked on a number of high profile buildings including Jay Jopling's Fig. 1, The Institute of Visual Culture at the Fitzwilliam Museum, Cambridge and the new St John Bread and Wine on Commercial Street, London.
An off-site programme runs between June and December 2006 and will include: the second half of the Sound Exchange Project with Parker's Box, which will send Clare Gasson to show new work in Brooklyn between June and July and The Alien by Matti Braun, a new cross disciplinary work, based on a screen play by Indian film director Satyajit Ray for a Bengali/English science fiction film, which will be presented at the Laban, Deptford in November. We will be updating you about these projects later.

For further information please contact Kirsty Ogg or Bridget Crone at the gallery on 020 8983 4115.
The Showroom is financially assisted by Arts Council England and The Moose Foundation for the Arts.