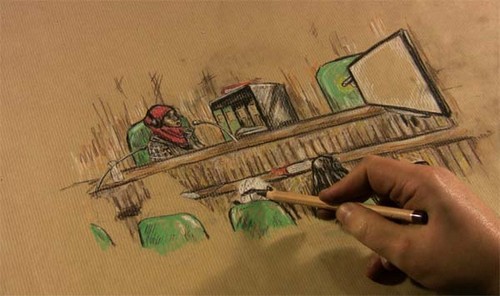 The first project in a series of participation based commissions under the umbrella title of Communal Knowledge.

Lawrence Abu Hamdan is a London-based artist whose projects imaginatively deconstruct sound, in particular the voice and its relation to the city.

In February 2010 Abu Hamdan worked with a group of young people to pursue the premise that the voice and its mode of delivery are the principal means of legal operations. Over a series of playful workshops and recording sessions Aural Contract reimagined the multiple voices that both shape the courtroom and leak beyond its walls into the social sphere. An exhibition of the work will take place at The Showroom from 10 – 20 March 2010.

Abu Hamdan has exhibited widely in the UK and abroad, including Model Court at CCA Glasgow, Marches for Artangel Interaction and Moot Points at Transmission Gallery, Glasgow. He is currently undertaking a PhD at the Centre for Research Architecture at Goldsmiths, University of London.